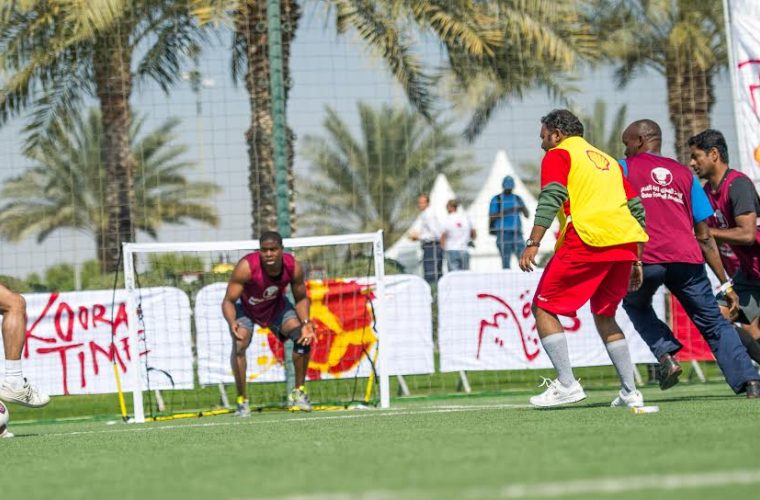 Qatar Football Association (QFA) and Qatar Shell will once again join forces to celebrate the HH Emir Cup Final 2014 by hosting a football-themed Fan Zone for spectators on Saturday 17th May from 3.30pm at Khalifa Stadium, Aspire Zone.

This year’s Koora Time Fan Zone takes on an urban street theme demonstrating that football, the nation’s favourite sport, can be played anywhere, anytime, and in any environment. The QFA and Qatar Shell are joined for the first time by activation partners the Ministry of Interior, Civil Defence, Toyota and Sony who are guaranteed to elevate the fan experience.

For those not able to get their hands on tickets for the highly anticipated final between last year’s runners up Al Sadd and newcomers Al Sailiya, the Koora Time Fan Zone includes a giant screen and viewing area open to the general public. Visitors will also havethe opportunity to learn more about and register for the QFA and Qatar Shell flagship program, Il’Ab We’Yana, which is based on the FutbolNet methodology created by FC Barcelona Foundation. Targeting children aged seven to 12, the program is designed to provide children with access to additional hours of exercise throughout the academic year.

This exciting event builds on the long standing relationship between the QFA and Qatar Shell. Qatar Shell has been sponsoring HH Emir Cup for nine consecutive years, and in February 2013 the two partners announced the launch of their corporate social responsibility initiative, KOORA TIME, which aims to improve the health and well-being of Qatar’s youth through football, in line with the Qatar National Vision 2030.

Sheikh Hamad bin Khalifa bin Ahmad Al-Thani, President of the Qatar Football Association, stated, “We are excited about the Koora Time Fan Zone. It is an opportunity for the whole family to get active and join in celebrating HH Emir Cup Final in an enjoyable environment. This event will mark the ninth anniversary of the QFA and Qatar Shell partnership”.

Wael Sawan, Managing Director and Chairman of Qatar Shell companies, said, “We believe that more football will lead to healthier youth. We encourage everyone to join us, get active and support their team at what will be the biggest Koora Time Fan Zone yet. This initiative demonstrates our commitment to the Qatar National Vision 2030 and Qatar’s National Development Strategy 2011-2016, which seeks to improve the health and wellbeing of Qatar’s youth.”