Art and sport fuse talents in aid of poor children 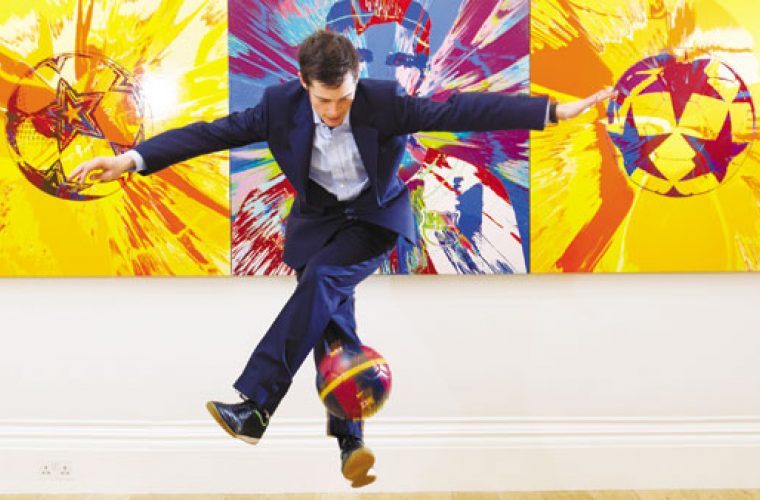 The worlds of sport and art have fused their respective talents in support of the ‘1 in 11’ campaign to ‘Extend Educational Opportunities to Children in Bangladesh, Indonesia and Nepal’. Next week in London, Sotheby’s will auction eighteen artworks donated by celebrated artists in support of the FC Barcelona Foundation, Reach Out To Asia (Rota) and Unicef campaign.
Qatari artist Yousef Ahmad has donated an artwork which will go under the hammer on February 12 alongside Damien Hirst’s ‘Beautiful Messi Spin Painting for One in Eleven’, featuring the famous footballer, who alongside the tennis champion Serena Williams, launched the campaign last month.
Globally, ‘1 in 11’ primary school-age children – or 58mn out of 650mn children – are out of school. The majority are among the most disadvantaged and vulnerable: children living in areas affected by conflict; children in extreme poverty; children with disabilities; children from indigenous communities. In addition, in many schools, sports programming does not exist, even though studies have shown that including sports in school curricula can inspire children to attend and stay in school, lead to better physical health, and help to improve their grades.
The funds raised by ‘1 in 11’ will focus initially on education programmes in Indonesia, Nepal and Bangladesh.
To generate a bit of fanfare leading up the Sotheby’s fundraising auction, the World Champion Football Freestyler, John Farnworth, gave a demonstration of his fancy footwork against a backdrop of some of the donated works at Sotheby’s New Bond Street premises yesterday.
Alongside the artworks, two lots to go under the hammer are bound to prove popular. Lot 2 offers the opportunity to become an FC Barcelona Board member for a day including attending a game with VIP seats, while Lot 15 offers a Long Weekend in Barcelona for two persons, including an opportunity to meet Lionel Messi.