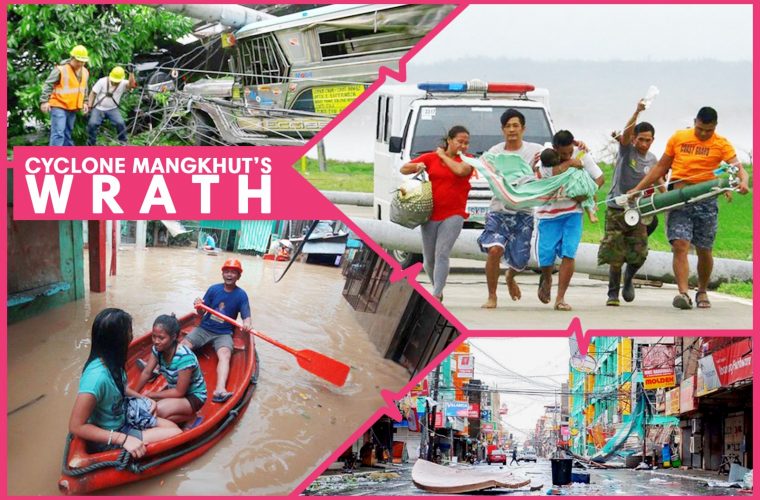 Cyclone Mangkhut, locally known as Ompong, is the biggest typhoon to hit the Philippines (and some other parts of the Southeast Asian region) this year and while it's not really considered a super typhoon by the Philippines' national weather agency (PAGASA), it still left quite a furious trail of destruction especially to the country's main group of islands Luzon, which is home to about half of the Philippines' 105 million people.

Update as of Sunday morning (September 16): All tropical cyclone warning signals have been lifted as the typhoon continued moving away outside of the Philippine Area of Reponsibility (PAR).

The Philippines was just beginning to count the cost of the typhoon, but authorities have confirmed at least 60 were killed when it smashed into Luzon on Saturday.

Below is the total breakdown from the Philippine National Police (PNP) as of Sunday morning:

The PNP said 47 others were injured, while 16 remain missing.

Two rescue workers were killed while trying to free people trapped in a landslide in the mountainous Cordillera region. In Nueva Vizcaya, another family of four died Saturday afternoon after their house in a remote barangay was buried in a landslide. In Ilocos Sur, a man was cleaning up debris when a mango tree fell on him. He was pronounced dead on arrival. Police also said a body had been found in a river in Manila.

Collapsed houses (particularly in coastal areas), tore off roofs, cut-off roads, downed power lines, and huge agricultural lands being at risk are just some of the most common hell-like scenarios that Cyclone Mangkuth has left in many provinces in the Philippines.

Farms across Luzon, which produces a large portion of the nation's rice and corn, were sitting under muddy floodwaters, their crops ruined just a month before harvest.

Some 105,000 people were staying in temporary shelters after mass evacuation of coastal areas of the Philippines following major storm surge warnings.

Authorities in some areas of northern Luzon turned off power as a precaution, and said some residents in high-risk areas chose to ride out the storm to protect homes from looters.

Within the 125 km radius of the center of the typhoon, around 4.3 million people would be exposed to the storm. "Of this number, 824,100 are poor families," the CNN Philippines reported. It added that 2,298 families (9,107 people) had been preemptively evacuated on Friday.

The Philippine coastguard has said that about 5,000 passengers were stranded at several ports by the impending storm, which will head on towards southern China, Taiwan, and Vietnam.

Water levels in Hong Kong's famous Victoria Harbour and fishing villages could surge by up to four metres, authorities said earlier, and hundreds of residents have been evacuated to storm shelters as the observatory forecast severe flooding for low-lying areas.

In the neighbouring gambling enclave of Macau, all 42 casinos shut late Saturday night and businesses were shuttered Sunday morning, some boarded up and protected by piles of sandbags.

Preparations are also in high gear on China's southern coast, including in Yangjiang, which is not often hit by major typhoons and where the city's 2.4 million people were bracing for a direct hit.

Almost all flights in and out of Hong Kong have been cancelled.

Last Friday, Qatar Red Crescent Society's (QRCS) Disaster Information Management Center (DIMC) was activated to keep up-to-date with the disaster, analyse the field reports about the situation and outline the intervention plans to help the victims.

QRCS’ representation mission in the Philippines has kept in touch with partners to gather real-time information, organise the aid process once started, and support the disaster information centre of the Philippine Red Cross.

Danger is far from over

Although PAGASA has downgraded the domestic threat level, it warned that the danger was far from over, with continued storm surges and heavy rains that could trigger floods and more landslides. "We are asking the people to remain alert and continue taking precautions," said a PAGASA meteorologist.

Philippine President Rodrigo Duterte held a meeting on Thursday with the National Disaster Risk Reduction and Management Council (NDRRMC), where it was decided to ready extra emergency procedures ahead of the storm.

'I share the grief of those who lost their loved ones,' Duterte said in Ompong-hit Cagayan province.

"I talked to the president last night. His clear and concise marching order was 'Save lives, save lives," a disaster response coordinator and adviser to President Duterte has said.

Australia today (Sunday) is giving A$800,000 (P31 million) in humanitarian assistance for Mangkhut victims. The aid, which will be distributed through the Philippine Red Cross, includes sleeping mats, blankets, hygiene and shelter kits for up to 25,000 people in typhoon-ravaged areas.

Canberra also deployed humanitarian experts to the Philippines to help assess the typhoon's damage. "Our Embassy is coordinating closely with Philippine authorities and our international partners," Australian Foreign Minister Marise Payne said in a statement.

"We stand ready to provide further assistance if requested by the Philippine Government," she said.

You can check out these donation portals:

Authorities are taking extra precautions as they draw comparison with Typhoon Haiyan, which devastated central areas of the Philippine archipelago in 2013, and killed 6,300 people, many in storm surges that reached as high as eight metres.

Although not yet fully-calculated, damage to crops in a worst-case scenario could reach about 157,000 tonnes of paddy rice and about 257,000 tonnes of corn, worth 13.5 billion pesos ($250 million), the agriculture ministry said. That could result in tightness in the domestic rice supplies of rice, at a time when retail prices are already high, which would compound worries about inflation.

To know the chances of Qatar getting hit by a natural calamity, click HERE.

Are you a Qatar resident who's from any of these Mangkhut-affected countries? If your answer's yes, how did your family back home cope up with the widespread destruction brought about by the cyclone? We hope everything's okay from your side!

And if you know more ways on how people can donate to the typhoon-hit victims, let us know by dropping a comment below! Also, don't forget to like and share this article—it keeps us going!