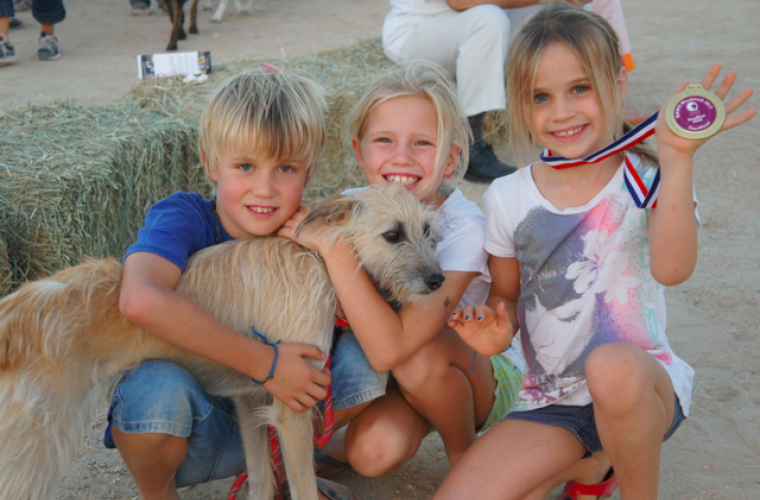 More than 300 dogs of different breeds were brought together yesterday afternoon at the “Woofstock 2013 Dog Show and Festival”, a fund-raising event attended by hundreds of pet lovers from various expatriate communities. Boston terriers, golden retrievers, mixed breed salukis, poodles, German shepherds, boxers, huskies, American bulldogs and many other breeds were listed for the show held in an open area in Muaither next to the Qatar Animal Welfare Society (QAWS) shelter. Kelly Allen, a committee member of QAWS, told Gulf Times that about 100 dogs were officially registered for the competition. “Every year it’s great for us because it is the only social event when dogs come out, keeping them socialised and it’s really good fun,” she said. The annual event also aims to raise awareness about animal welfare and promote responsible pet ownership. Allen said this year’s show drew more participants than in previous years. It was open to all pet owners in Qatar as well as those who simply wanted to watch the shows. Awards given during the competition included the ‘waggiest’ tail, junior handler, prettiest female, handsomest male, best puppy, best veteran, most elegant saluki, scruffiest mutt, best groomed dog, most original name, dog most like its owner, best purebred and QAWS’ best in show. Owner of a winning feathered saluki, John Ellam lauded the organisers for bringing together hundreds of people and their dogs. He said he had rescued one of his dogs from the street seven months ago. “He was only about 28 pounds when we found him and now he weighs 50 pounds. He’s healthy now and he’s a champion,” said Ellam, from Florida. Sarah Mortimer and her husband had also rescued a street dog, “Angel”, who won second place for the classic Doha special award. “I would never buy a dog. Some came from QAWS and one was living on the streets, now they are all healthy,” she said About the animals at the QAWS shelter, Allen said they now had at least 250, including about 110 dogs, 60 cats, 12 rabbits and farm animals such as cows, donkeys and chickens. She also disclosed that their stay in the present QAWS shelter had been extended until the end of March 2014. “We are still looking for a permanent facility and we have been trying to become a registered charity so we can have our own land with a bigger shelter,” she said. Hundreds of pet owners trooped to the “Woofstock 2013 Dog Show and Festival” PICTURES: Jayan Orma John Ellam and his winning feathered saluki. Picture: iLoveQatar.net Article: http://www.gulf-times.com/qatar/178/details/371052/dog-day-in-doha%3a-best-friends-meet