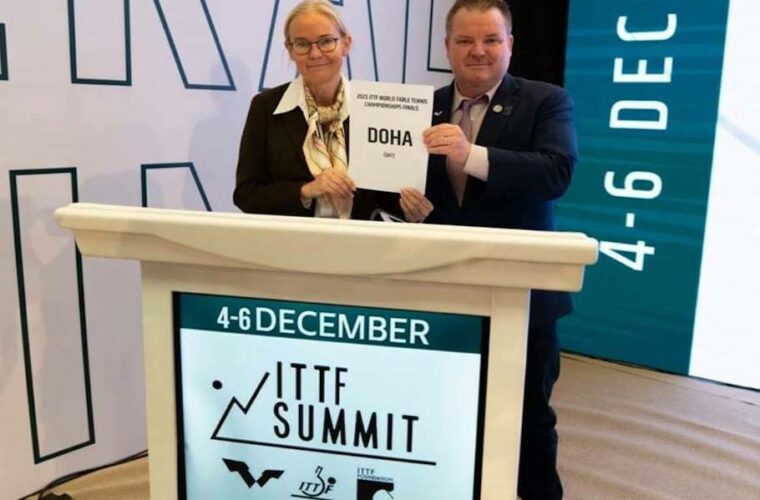 Qatar won the honour of hosting the 59th edition of the World Table Tennis Championships 2025 during the meeting of the International Federation of Table Tennis, which was held in the Jordanian capital, Amman, for three days, in the presence of the 227 member federations.

This is the second time that Qatar has won the hosting of the World Table Tennis Championships after the 2004 edition, which achieved great success from a technical and organizational point of view.

Doha received 57 votes compared to 39 for the Spanish city of Alicante, the other candidate, during the vote of the member federations to choose the host city on the sidelines of the meeting of the General Assembly of the International Federation of the game.

The choice of Qatar to host the largest global event in table tennis comes after it has recently proven itself as a major site and launch pad for a new era in this game after hosting the most prominent international and global table tennis tournaments, which achieved great success, and perhaps the most recent of which is hosting five major sporting events for international table tennis last March. For the first time in the history of the game, as clear evidence of the confidence that the Qatar Table Tennis Association enjoys in the International Federation of the game, in addition to the accumulation of experience among the Qatari administrative cadres, which are characterized by professionalism.

Among the most prominent of these events is the hosting of the International Youth Camp in the Aspire Hall, then the WTT International Championship for Juniors and Youth in the Women’s Sports Hall in Aspire Zone, followed by the VIDER Championship for men and women in the same hall, and the WTT CONTENDER and the WTT STAR CONTENDER Championship in Lusail Hall. These tournaments witnessed the participation of world stars in the game, making Doha the capital of world sports par excellence. It became a centre for major sporting events for nearly three decades.

Throughout the history of the world championships, no Arab country has hosted the championship except Egypt 83 years ago, specifically in 1939, and it was the second time in Qatar.

This edition of the World Table Tennis Championship will be exceptional, as it is the last tournament before the huge celebration that the International Federation of the game will organize in 2026 in the British capital, London, to celebrate the 100th anniversary of its founding.

The International Federation decided, in its meeting in the Jordanian capital, Amman, to hold the 2023 World Youth Championship in Slovenia, with Sweden hosting the tournament in 2024.

Mr. Khalil Al-Muhannadi, President of the Qatari, Arab and Asian Federation, First Vice President of the International Table Tennis Federation, and Chairman of the File Submission Committee, expressed his great happiness at Qatar winning the honour to host the 2025 World Championship.