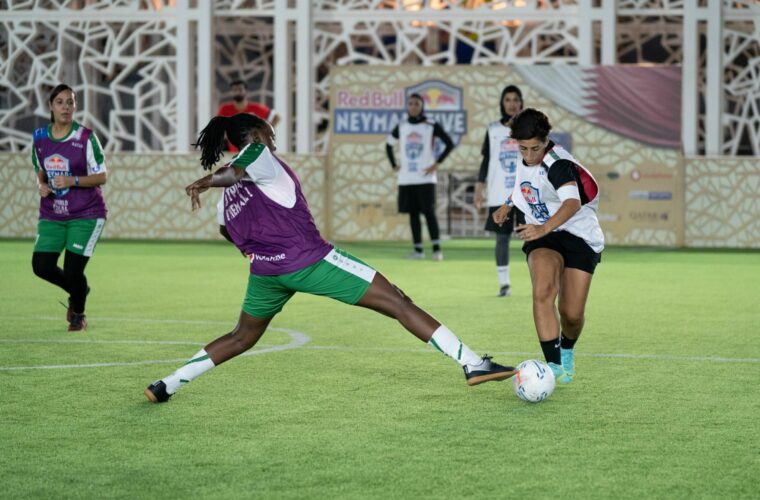 Teams from UAE and Brazil went head-to-head while USA and France dominated the mixed and women’s categories during Monday’s group stage matches in Qatar.

Competition kicked off at the 2022 Red Bull Neymar Jr’s Five World Final in Doha, Qatar on Monday evening, with two dramatic derby matches serving as the highlight of an action-packed group stage.

The Brazilian women’s teams from 2021 and 2022 faced off in their opening group game, with this year’s national winners running out comfortable 5-0 winners, as two representatives of the same country met for the first time ever in this tournament.

“We were so anxious about this game before kick-off,” said Edely Fontes, who was on the winning side with Resenha 013. “We thought it would probably be a hard game against the other Brazil team, but thankfully we won.”

In the men’s derby, the two UAE teams met in their final group match knowing that the winner would secure second place and a guaranteed spot in the lucky loser playoffs. As it was, they played out a tight and tense 0-0 draw, with the 2021 national champions ultimately taking the runner-up spot in the group courtesy of a superior goal difference.

In total, 57 teams took to the pitch on a hot and humid night at Qatar Foundation, each with the dream of outplaying them all and making it all the way to the final on Tuesday evening, where the prize for the two winning teams will be a match each against Neymar Jr and his friends.

There was plenty of drama and fast-paced action on show across the three match pitches, not only with such a once-in-a-lifetime prize on offer, but also due to the unique competition format - there are no goalkeepers, and every time a team scores, the opposition lose a player. Matches last for 10 minutes, or until one team loses all five players.

One of the night’s most eye-catching and dominant displays came from USA’s mixed team, who won all four of their group matches without conceding a single goal as they marched into the last 16.

“It was a great experience,” said Juan Quintero, the USA captain. “We tried to stay compact at the back and knock the ball around really quickly. With all this energy we are prepared to go as far as we can. The goal is to go and get the championship.”

On Tuesday evening, Neymar Jr will arrive at Qatar Foundation to enjoy all the action from the final rounds, before personally handing out the trophies and inviting the winning teams back onto the pitch for one final match each against him and his friends.