Tilted Intersection to be opened for traffic on Friday 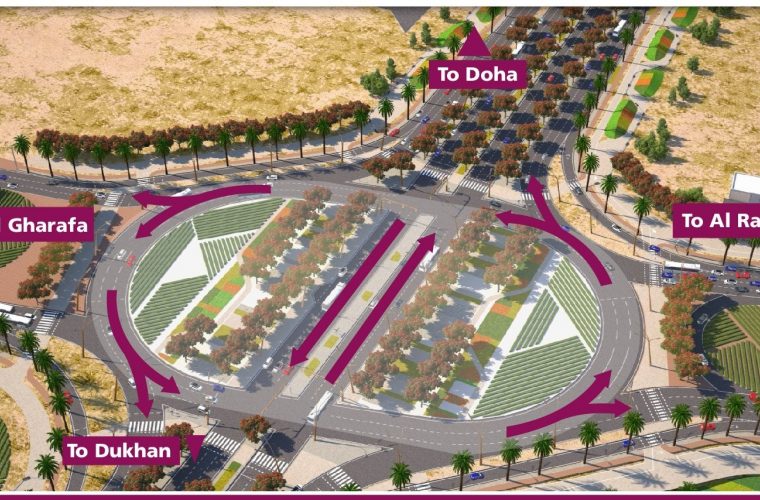 The Public Works Authority ‘Ashghal’ announces the opening of the Tilted Intersection on Friday 4 October 2019 to traffic, as part of Khalifa Avenue project, in coordination with General Directorate of Traffic.

The Tilted Intersection will include a signalized roundabout, which is a different design from the usual roundabouts. The new design of the roundabout will have Khalifa Avenue main free flow traffic pass through it, similar to Gharrafat Al Rayyan Interchange to facilitate the traffic and to serve as a link between Doha, Dukhan, Al Gharrafa and Al Rayyan.

The new intersection will facilitate the access to several vital facilities in the area such as Sidra Medical, Qatar National Convention Center, Qatar Foundation and Education City.

Moreover, the number of lanes at the new intersection has been increased, with three main lanes in each direction and two service lanes to accommodate approximately 8,500 vehicles.

He pointed out that the new design of the intersection will achieve a smooth traffic flow and reduce travel time, especially after the opening of the Tilted Intersection, which opened in early September, where it provides a free traffic flow between Al Gharrafa and Al Rayyan.

Traffic Diversion
In order to allow the opening of the new Interchange and accelerate the completion of the remaining works, Ashghal will implement a temporary traffic diversion, for four hours on the Tilted Intersection starting Thursday 3 October 2019 at midnight

From Al Rayyan to Doha and Dukhan

Road users on Huwar Street will have to use the new tunnel until Shaikh Faisal Roundabout, where they can make a U-turn and follow the directional signs to their destinations

From Doha to Al Rayyan

Road users on Al Luqta Street heading towards Al Rayyan, will have to continue straight until Gharrafat Al Rayyan Interchange, where they can make a U-turn and follow the directional signs to their destinations

The Public Works Authority has completed the asphalt works on Al Luqta main road which consists of four lanes in each direction from the east of Tilted Intersection until west of Al Wajbah Interchange.

The Public Works Authority has opened important sections of Khalifa Avenue Project, such as significant sections of the vital three-level Bani Hajer interchange. The complex interchange which replaced the previous roundabout accommodates approximately 1,500 vehicles per hour and provides free traffic flow movements and is a key access to Dukhan Road, Al Luqta Street and Al Rayyan Road, as well as the residential areas around such as Bani Hajer, Al Rayyan, Gharrafat Al Rayyan and Al Gharrafa. The intersection is comprised of two bridges, two underpasses, three ramps (right turn exits) and two loops to provide connectivity in all directions. Upon completion, the interchange will boast a unique 300-meter multipurpose bridge, the first of its kind in Qatar, along with cycle and pedestrian lanes.

It is important to note that Ashghal has completed 92% of construction works on Khalifa Avenue Project, which is scheduled to be completed in Q3 2020. Upon completion, the project will deliver approximately 11.6 km of dual carriageway with four lanes in each direction besides seven major interchanges, service roads along the carriageway, in addition to cycle, pedestrian and camel paths which will be on the south side of Al Luqta Street.