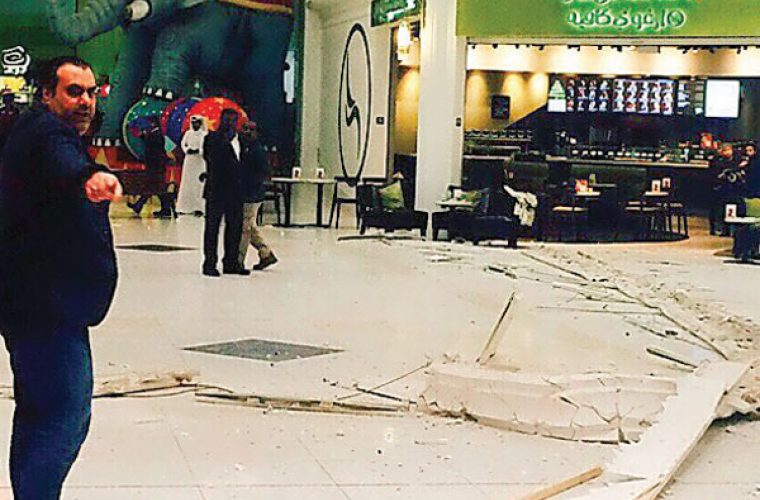 Panic spread among visitors at the Landmark shopping mall when part of the gypsum ceiling collapsed at its busy corridor yesterday morning.

The corridor, with an artificial roof with a drawing of the sky, leads to the food court, cinemas and children’s play area making it the busiest spot. The area is also located near three popular cafes at the shopping mall.

No one was injured in the incident according to the Ministry of Interior (MOI).

“Civil defence is checking into the safety of the Landmark after collapse of a small part of gypsum ceiling at the corridor,” MOI said on its Twitter account around 10.30 am yesterday.

An employee of a store at the Landmark told this daily yesterday: “The area is busy even during mornings due to the food court and cafes. Luckily no one was hurt. If it was in the evening the scene could have been different as many people cross that place to the play area and cinemas.”

Social networking sites shared photos and videos of the incident. They showed portions of the collapsed gypsum ceiling, Ambulance Service and Civil Defence staff at the venue. A witness said on Twitter, “I was at Starbucks and it happened in front of me. A big part of the gypsum collapsed and thankfully people immediately ran way and no one was injured.”

Faizal Al Marzooqi, a Qatari columnist, tweeted, “If we check all shopping malls, will be able to find many defects. Especially the Landmark from the beginning looked like a garage.”

Many called for action to ensure safety of visitors to shopping malls. “The pictures show that a major portion of the gypsum ceiling has collapsed. This has happened due to the ignorance of the mall maintenance. Permanent solutions should be found for such problems and whoever is responsible should be taken into account,” said a Twitter posting.

Another commentator said, “People will be more scared to go to shopping malls while hearing of fire accidents and roof collapses. So there should be some strong action to ensure the safety of people.”

In April 2013, part of the roof of a popular ice cream parlour collapsed at Landmark shopping mall. No one was injured.