Highlights of H.H. The Amir’s speech at the Advisory Council 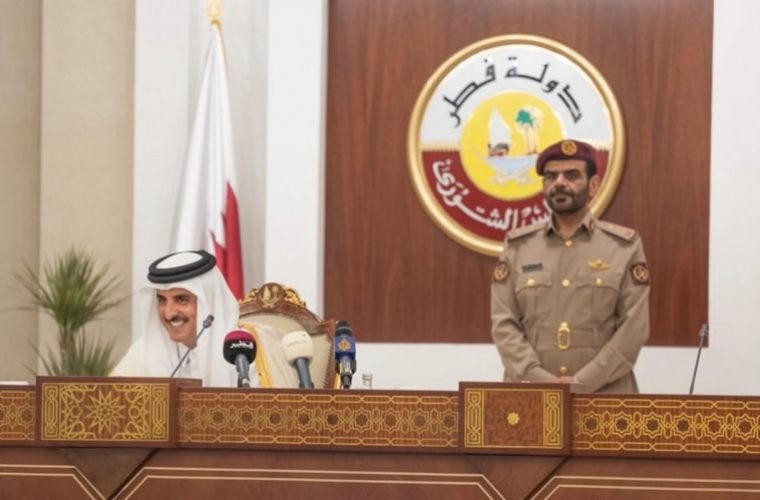 Qatar’s self-reliance has been increased

Qatar's economic invulnerability against external tremors has been boosted and our self-reliance has increased, the bonds with our allies have become stronger than before, and our relations with most of the world countries have developed. Most importantly, the Qataris have become more committed to the ethics they are famous for, and their awareness and realization of the scale of their country’s accomplishments and the importance of national sovereignty and independence of our political decision, under which these accomplishments were achieved, have been deepened.

The world economy witnessed an economic recovery in 2017 involving most countries, regional and economic blocs, including developed countries, among which were the United States, the euro zone and Japan. However, this improvement did not include the Middle East, North Africa and the GCC countries, including the State of Qatar.

But growth in Qatar was the least affected, also a drop in our hydrocarbon GDP was coupled with about 4% growth in GDP from other sources, thus reflecting the role of economic diversification as an important growth component.

Exports increased by 18%, leading to a significant improvement in the public budget, trade balance and current account. The banking system retrieved in less than ten months the level of indicators that prevailed before the blockade, while the level of some of them became even better. In addition, Qatar Central Bank regained its reserve level, and the Qatari Riyal has maintained its value and free circulation. The State continued to provide funding for the World Cup projects without compromising the projects required to achieve the National Vision.

It's noteworthy that the number of factories operating in the State has increased by about 14% after the blockade, and these factories managed to achieve a great deal of self-sufficiency in some food products and consumables. It is to be noted here that the role played by the private sector in achieving these results was pivotal in terms of its interaction with the requirements of this stage. We still expect from it a greater readiness for direct investment and bolder initiatives.

We are striding at a steady pace to achieve water and food security and to secure sufficient electrical energy to push forward the development drive and meet its requirements. The first phase of the Strategic Water Reservoir Project was inaugurated and work is proceeding to commission the remaining phases by the end of this year, with a 155% increase over the current freshwater stock. Also the Umm Al-Houl station in the Economic Zone has come on stream and will be officially opened at a later date. This megaproject will increase Qatar's electricity production by about 30% and water desalination by about 40%.

The State has adopted a conservative fiscal policy, to reduce spending, necessitated by the sharp drop in oil and gas prices that started at the end of 2014. We had to strike a balance between spending cuts, which are also beneficial to the State and community institutions, and the expenditure requirements dictated by pursuing investment in infrastructure and key development projects and the preparations for the World Cup, which has not been an easy task. But, the signs of success of this policy have started to be seen, by the grace of Almighty God and by virtue of the joint efforts and cooperation among all the government's monetary, fiscal, investment and economic institutions. Government consumption expenditure this year decreased by around 20% from the previous year while household spending increased by 4%. It is expected that this policy will lead to a public budget surplus this year, and that this surplus will increase in the coming years.

The World Bank expects Qatar's economic growth rate to reach 2.8% in 2018, and will rise to around 3% in the following years

Qatar has been able to overcome the impacts of the blockade to a large extent. Economic institutions and financial markets share optimism with us. The World Bank expects Qatar's economic growth rate to reach 2.8% in 2018, and will rise to around 3% in the following years. Global credit rating agencies also revised their outlook for Qatars economy from negative, immediately after the blockade, to currently stable, thus reflecting their favorable expectations for the financial and economic performance of the State of Qatar in the future. Confidence of the international financial institutions in the future performance of Qatars economy was evident when Qatar raised $12 billion in a sovereign bond issue in the international financial markets. The volume of subscription for the Initial Public Offering has reached $53 billion, at moderate interest rates.

Preliminary studies have been completed for the development of a major project for the production of LNG from the North Field, thus Qatar will maintain its position as the world's largest liquefied natural gas exporter for many years to come.

Our oil exports have not been affected by the blockade, the State has been keen to fulfilling all its obligations under the existing contracts and has concluded several long-term contracts, the latest of which was with Petro China, whereby Qatar will supply various Chinese districts with about 3.4 million tons of liquefied natural gas annually. This agreement extends until 2040.

The human being remains, the core, focus and target of the development plans.

The human being remains, the core, focus and target of the development plans. High living standard of citizens must be coupled with values, cultural evolution and care for morality. Otherwise, a possibility of welfare degenerating into a state of social corruption based on an unproductive and constantly resentful culture of consumerism and a sense of entitlement that is not based on work and efficiency, may arise.

In Qatar, a modern society, and a modern State and a developed economy have emerged. We transformed the oil and gas economy into an advanced industry.

It is indeed unfortunate that the ongoing Gulf crisis revealed the failure of the GCC to attain its goals and meet the aspirations of our Gulf peoples, which weakened its capability to face the challenges and risks and marginalized its regional and international role. It is hoped that the current crisis will be used to develop the Council on sound foundations including dispute resolution mechanisms and ensuring their non-recurrence in the future.

Undoubtedly, the deterioration of the pan-Arab situation, including the Gulf, strips the Arab world of its immunity and ability to cope with the aggravation of various issues that we suffer from in Palestine, Syria, Yemen, Libya and others, and weaken our countries and expose our inter-relations to penetration.

The State of Qatar will continue, as it has always been an active and supportive side to all exerted efforts to resolve differences and confront the challenges and dangers surrounding the Arab and Islamic Ummas and deal effectively with the issues and problems that threaten international peace and security.