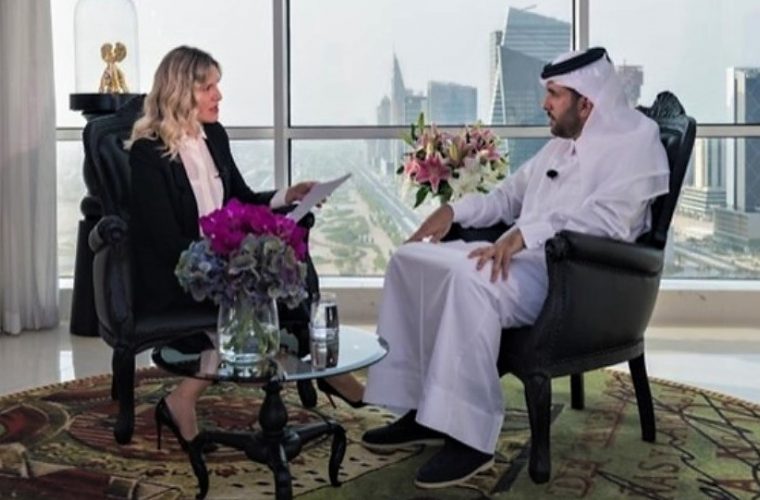 Director of the Government Communications Office His Excellency Sheikh Saif bin Ahmed bin Saif Al Thani said that there were a number of reasons that inspired Qatar to establish Media City, one of them is Qatar's long history in media which started with radio and TV in the sixties with the goal of providing people with information.

His Excellency added, in an interview with TRT World's Strait Talk, that following phase one in the sixties there was phase two in the eighties and nineties which saw a number of intellectuals and academics write columns in daily newspapers on government laws which did not see any pushback. Instead, His Excellency added, the state realized that media was a platform for citizens to voice their opinion.

His Excellency noted that phase three started in the mid-nineties to 2004. It saw the establishment of Al Jazeera, as well as a sports and cultural TV channels in Al Kass and Al Rayyan TV respectively. His Excellency highlighted the high level of viewership for both channels, noting that Al Kass sports channel has more viewers outside Qatar than inside the country. Al Jazeera also expanded during that time beyond being an Arabic channel and became an international network broadcast in many languages.

Replying to a question on whether the Media City was established in response to the diplomatic crisis, His Excellency said that the Media City project was researched in 2005, with a team established in 2008 to implement it. His Excellency said that the government back then did not see that it was not the right time to push through with those plans, as they were still establishing themselves in the space and because Al Jazeera and the other channels were just a sample. Now, His Excellency added, Al Jazeera has become an international network that built its name thanks to the efforts of the independent journalists who worked in it and were given all the space and creativity to do their own shows. His Excellency highlighted that Al Jazeera's motto "The Opinion and The Other Opinion" is a reflection of that.

HE the Director of the Government Communications Office said that the project was inspired by His Highness the Amir, who issued directives in 2017 to initiate the project. His Excellency stressed that the move was not a reaction to the diplomatic crisis, but rather an indication that the country is moving forward. His Excellency highlighted that the last two years saw the state establish also the Free Zone Authority, continued developing their labor laws, and announced elections for the Shura Council. His Excellency stressed that the crisis was behind the state and now they are moving forward by enhancing bilateral ties with countries all over the world, noting that Qatar is an esteemed investor that is highly appreciated all over the world by banks, companies, and countries.

On whether the blockade would end soon, His Excellency said that the blockading countries started that and they can end it. His Excellency also noted that this was not the first crisis of its kind, as there were similar ones since the eighties. His Excellency then stressed that Qatar was not an easy target as it is an independent country that has a leader that is followed in HH the Amir. His Excellency said that the country builds bilateral relations based on mutual respect, and believes in the importance of dialogue, noting that Qatar played the role of mediators in different matters throughout the region and beyond.

On how Qatar could attract different media outlets and how the country would benefit from these partnerships, HE Director of the Government Communications Office said that they already have 33 agreements with media technology-based outlets. His Excellency noted that Media City can be thought of as three different categories: TV channels, publications, and social media.

His Excellency said that social media is the upcoming new media, and that is why Media City will focus on it. One of the initiatives inside the city according to His Excellency will be to build small studios where any blogger or social media influencer will have everything they need to create their videos and edit them for free. His Excellency added that in exchange for providing them with the latest technologies in media, they could give lectures in one of the universities in Qatar such as Qatar University, which has a big media department, or the Northwestern University campus, which is an American university.

His Excellency gave an example with a report that comes out by a media outlet in Doha which upsets one of the countries, and said that the country would not be able to take any legal action against the outlet on the editorial side here in Qatar. They could do that in the location of the media outlet's headquarters. His Excellency noted however that commercial disputes and similar matters can of course be resolved in Qatari courts, but expressed hope that there won't be many.

On what has changed in the country over the past two years and its impact Qatar's foreign policy, His Excellency said that the last two years acted as a catalyst for different fields. His Excellency gave an example with the higher levels of self-sufficiency in different industries such as food products and others, especially that the majority of food and medicine used to come through borders that are now closed. His Excellency said that the state dealt with that development swiftly and as a result people are living their lives normally with nothing really changing and price levels remaining stable. His Excellency added that overall the crisis has been more positive for Qatar than negative.