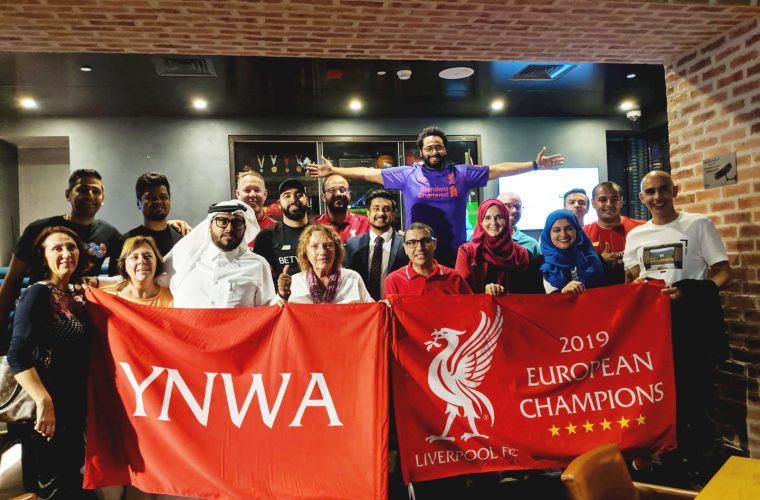 The Liverpool Football Club (LFC) has over 300 Official LFC Supporters Clubs in over 90 countries worldwide, and in January 2013, the Qatar Reds were also given official supporters club status by the LFC, welcoming them into the family. These Supporters Clubs bring fellow supporters who are devoted to the LFC together, no matter where they live in the World.

When did you become a fan of Liverpool and why?

I was born into supporting Liverpool, my mum and my brothers were avid reds supports so it’s in the blood as they say. When I moved over to Qatar I missed home a lot, finding and being part of Qatar Reds gave me that sense of belonging again, all Liverpool fans all around the world are part of one big extended family. We are Liverpool, we are Family.

What is Qatar Reds

Qatar Reds is the Official Liverpool Supporters Club in Qatar. We want to provide a way for Liverpool fans in Qatar to connect with each other, to be part of the LFC community and share their passion for the club.

How was Qatar Reds created and why?

Qatar Reds was founded in 2013 to bring together Liverpool supporters in Qatar. Some of our members were born into it like myself, some have been fans for over 40 years and some have been caught up in the buzz from the Klopp era. First and foremost we all share a love for the club, and want to bring all the Reds in Qatar together. Qatar Reds is a way to get to know LFC better; to understand the unique culture of the club and the city and to connect with others who share your passion.

How many members do you have? Are there many Liverpool supporters here?

We have around 300 official members in the Qatar Reds but are connected to around 1,400 Liverpool supporters in Qatar. We know there are so many more. Since the signing of Mohamed Salah two years ago, there has been a huge growth in the number of Liverpool supporters from the Arab world which makes us all really proud. Liverpool is an amazing club to follow, everyone knows the unique feeling and atmosphere surrounding Liverpool games.

Apart from watching Liverpool matches and supporting them, what else does Qatar Reds do?

We remain a small fan group, but one with a purpose. Apart from being supporters of the Red men, we are very keen to build a community and to offer support to the many Reds who have recently moved to Qatar. We have also mapped out an action packed agenda for the year ahead to work with our members to give back to society. We can't really comment so much on this right now but we have some great community connection ideas in the pipeline.

What is unique about Qatar Reds?

The great thing about Qatar Reds is we are able to connect with so many different people from different walks of life, different back grounds, different cultures, but we all come together to share the love of one team.

What is the biggest achievement of Qatar Reds so far?

Biggest achievement? Connecting with Liverpool supporters in Qatar from all parts of the world who have incredible passion for the club and allowing them to share that with like minded others, our love for Liverpool unites us on a level that looks past gender, age, nationality, we are just a Red family.

Some fans based in Qatar have visited Anfield many times; some have not. We also recognise that it is hard for people living in Qatar to be able to get to go to games. In the past year, we've been able to organise tickets for a raft of Premier League games, the Champions League Final and the Super Cup. Some of our members have been able to visit Anfield for the first time, as a result.

The last year has been phenomenal. Yes, we (Liverpool) have won trophies but it's the quality of the football, the personalities in the camp, the atmosphere at Anfield, and also the incredible connection between the owners, the manager, the players, the fans and the entire city of Liverpool. It's an amazing time to be a Liverpool supporter.

Why do you love what you do?

The sense of belonging, of being part of something bigger not to mention the buzz of watching games with other reds. It is also amazing to see a new face turning up to the game and them immediately being welcomed as one of our own. The Liverpool fan base is indescribable, once you’re part of it you're always family.

Do you have any message for the people of Qatar?

To a nation that feels so strongly about football, I am right at home here and enjoying this journey with you.

Do you have any message for Liverpool football fans in Qatar?

If you are a Red I advise you to reach out to us, join us and become a part of our ever-growing Qatar Reds family.

Want to know more about Qatar Reds and how you can be part of the gang, check out their social pages:

Are you a Liverpool fan? have you heard of the Qatar Reds? Do let us know in our Comments section. Like and share the article - it keeps us going!

NEWS / COMMUNITY
Guinness World Record for Most Languages in a Reading Relay to be attempted...
Submit