Up close and personal with Qatari artist Mubarak Al Thani 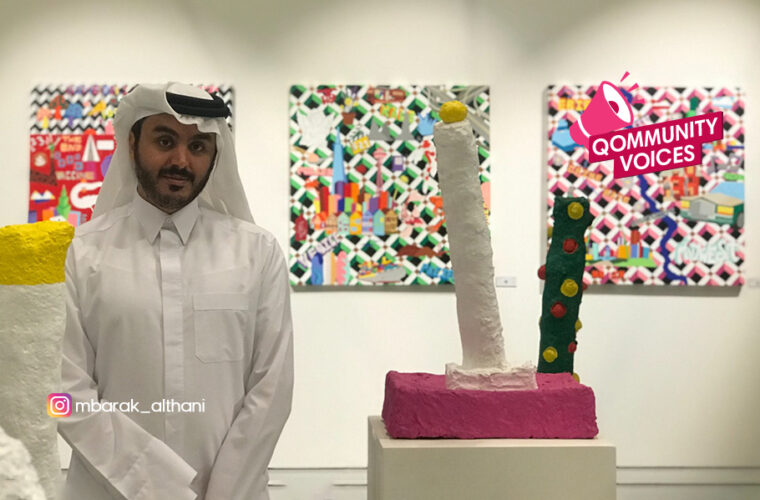 Mubarak Al Thani is a Qatari artist who has had a keen interest in painting from a young age. He’s found himself having a fluctuating relationship with painting over the years and it has grown into a serious interest in recent years.

Painting turned into a source of expression for the artist, best described in his words as “being dependent on it”. His current fondness for painting has grown to the extent of its absence leaving him feeling like something is not right or not in place, even if that is a matter of painting for five minutes of his day or spending hours on other days.

You can find him painting in either one of his studios located within Doha or his farmhouse outside of the city. Given that the artist spent many years in New York, he has a studio located there as well, which was a location that produced many of his creative creations.

The ILoveQatar.net (ILQ) team brings to you an exclusive interview with this talented artist.

His style of painting

When asked about his style of painting, the artist expressed that it has been one that has grown and evolved over the years, although, he has had an understanding from his childhood. His current day paintings represent cubic sharp aesthetic, abstraction and literal expressionism. He associates his current day painting style with what he mostly used to illustrate in his school notebooks which depicted tables and chairs that were cubic and dimensional.

He also expressed an early interest in deconstructing objects which are now reflected in his paintings. He also added that, although he likes to represent places and things in a cubic element, he likes them to be identifiable and not completely foreign to viewers.

Thought behind the choice of colours

The vibrancy and bold colours in his paintings are eye-catchy and are noteworthy throughout his artworks. The artist sheds light on this as being mood-based, yet ensuring relevancy to the topic in consideration, however, tends to be an unintentional choice.

Serious topics tend to be expressed in shades of red or “danger colours” as he expressed, whilst other painting subjects such as landscapes or deserts would demand lighter hues such as greys and pinks.

His current exhibition on display: Espresso 4 the Road

The exhibition was conceptualized in 2018 and different pieces of artwork were put together. The exhibition was postponed for many reasons, COVID-19 being a primary one. It was only in the year 2021 that the exhibition was reaching its finalization with years worth of putting together. These unforeseen delays allowed him to re-work and re-format the concept of the exhibition and expand its scope towards an urban and global culture. He was able to dive into concepts that connect people physically and culturally. He sought cultural resemblance in the simple things represented in his paintings such as coffee and Tabasco amongst many others.

When asked about the name of the exhibition - keeping it simple, Mubarak expressed that “espresso” signifies energy, whilst “the road” is the means of connection for global culture. He also made a reference to his long journey to finally execute the exhibition, which certainly took many shots of espresso as he expressed with a chuckle.

How the countries of residence influenced his paintings

The artist’s work represents a lot of global cultures, road trips and things of that nature as he had spent many years outside Qatar, particularly in the USA. A constant critique he was receiving towards his work was that his focus was always global and not local, although he did have references to his home country. He said that his return to Qatar in 2017 and the delay of the exhibition permitted for further representation of local culture within his paintings.

The background behind the sculptures at the exhibition

Amongst the many paintings at the exhibition were sculptures that paid homage to the adventure park Coney Island in New York which he had visited. His distinct interpretation and expression of straightforward objects were noteworthy even in this art form. He brought to life his version of the haunted mansion, hammer, cotton candy and others that signified the theme park.

Inspiration for his local depictions

Many of his art pieces that were brought to life from local inspiration tended to be a combination of his educational background and his passion. He had pursued city planning as his education; therefore, the paintings reflected his interest in planning and love for architecture and art. In his words “art is the medium of expression, architecture is what he depicts and planning is the process”.

How COVID-19 impacted his paintings

Some of his signature pieces were inspired by the COVID-19 situation. While many of his art pieces were inspired by road trips, he brought to life the mental road trips that many explored during difficult times of restriction and isolation due to COVID-19. Many messages that were conveyed through media or were manifested internally or things that just correlated to the situation were depicted through simple elements; examples of which are “home delivery”, “latte”, “vaccine”, “help” and many others.

The combination of large complex paintings and small simpler pieces

He expressed that while he paints large complex concepts, he also paints straightforward pieces that do not demand the same kind of emotional energy. Although he ensures that these less saturating paintings convey a direct message and are easier to interpret, he still prefers to deconstruct them leaving an element of ambiguity that he enjoys from the side of the onlooker.

His art is unique and thought-provoking with the exhibition being a haven for art lovers and appreciators.

Visit this link for further details of the exhibition:

Did you know about Mubarak Al Thani before? Have you visited the exhibition yet? Do you know of someone who is making a difference in our community? Drop us a line in the comments below and you could see them highlighted in our next Qommunity Voices! 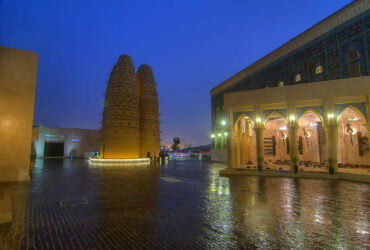 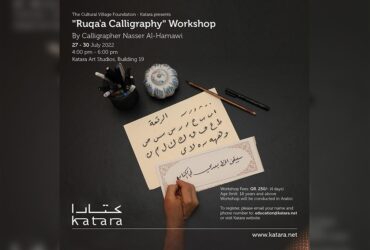