People of Qatar express solidarity with Palestinians through social media 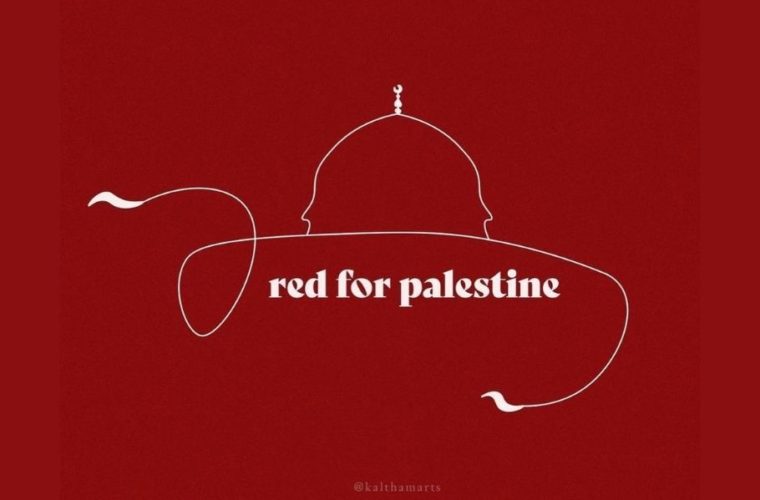 Early this May 2021, the #SaveSheikhJarrah hashtag was trending on social media because of the Israeli government's plans to drive Palestinian families out of their homes in the East Jerusalem neighborhood of Sheikh Jarrah to turn it into a Jewish settlement. More recently, the tensions have escalated resulting in hundreds of Palestinians hurt with more than 20 dead including children due to violence in Al Aqsa Mosque and the Gaza strip.

Social media platforms Instagram, Facebook, and Twitter were also accused of censoring content related to the violence in Sheikh Jarrah as well as removing accounts posting about the situation according to Arab News and Thomson Reuters Foundation. Instagram earlier posted on their PR team's Twitter account that there was a "widespread global technical issue not related to any particular topic" that led to "some people experiencing issues uploading and viewing stories". They updated on 7 May that the issue was fixed and that they're "sorry to all impacted, especially those raising awareness for important causes globally".

Qatar has always remained firm in its support of the Palestinian people. The State of Qatar has also provided continuous aid throughout the years, for example, $480 million financial aid to the families in need in Gaza (2019), supporting the education of Palestinian youth, $1.5 million food assistance (2020), $1 million cash assistance to Palestinian refugees in Syria (2020), $1,252,800 vocational & technical training program (2021), and much more.

So it comes as no surprise that prominent Qataris, Twitteratis, organizations as well as landmarks have also expressed their solidarity with the Palestinians through social media posts.

His Highness the Amir said: "During my contact with my brother, His Excellency President Mahmoud Abbas, I assured him of Qatar's firm and supportive stance for the brotherly Palestinian people to obtain their national rights, with our strong condemnation of the repeated attacks of the Israeli occupation forces on defenseless civilians and worshipers in the blessed Al-Aqsa Mosque, and I also stressed the importance of the unity of the Palestinian and Arab ranks." (translation)

RELATED: H.H. the Amir affirms Qatar’s support for the Palestinian cause

Her Highness posted a photo of the Al Aqsa Mosque and a verse from the Quran on her Instagram account.

Her Excellency Sheikha Al Mayassa posted an artwork by Kaltham E. Alfakhroo bearing the words "Red for Palestine" with the caption Save Humanity on her Instagram account.

Qatar's Deputy Prime Minister and Minister of Foreign Affairs posted a statement on his Twitter account: "We strongly condemn the Israeli occupation forces' storming of the courtyards of the blessed Al-Aqsa Mosque and their brutal assault on worshipers in these virtuous days. We call on the international community to take immediate action to protect the Palestinian people and holy sites."

Qatar Foundation (QF) posted a message "Unmute Yourself #BeTheChange" in red with the hashtag #SaveSheikhJarrah.

We stand in solidarity with the people of Palestine and their rights to protect and defend their land against all forms of oppression. It's time we all speak up so our voices can be heard. #SaveSheikhJarrah #Palestine pic.twitter.com/4OjSQTRvdf

"We stand in solidarity with the people of Palestine and their rights to protect and defend their land against all forms of oppression. It's time we all speak up so our voices can be heard."

Qatar Football Association posted a photo of the flags of Qatar and Palestine and during a match, two football teams also posed with a banner with the message "Palestine in our hearts".

Mr. Q, the friendly neighborhood Qatari, said in his Instagram account: "The World knows what’s happening is wrong. Countries leaders are all vocal in saying that this needs to stop. Thanks to smartphones and social media, everybody can see what’s happening with their own eyes... the evidence is there. Qatar has been trying to help in many different ways. From donations to giving people opportunities, to trying to facilitate dialogue. So I ask myself, why is this allowed to happen? What’s the point of having all these World superpowers when they’re not using their power to do anything super? Palestinians aren’t even asking for anything special except for the right to live in peace."

"Obligatory disclaimer for the troublemakers: There are so many issues happening around the world and they’re all important. Me posting this does not mean that I care about one thing more than another. There are a lot of initiatives that I have supported such as Human Rights, Cancer Awareness, Right to education, refugee support, support of people in other war-torn areas, and there will be many more. We can’t fix the world’s problems in a day, but we can at least try to do whatever we can day by day. If you feel angry and frustrated, don’t take it out on anyone trying to support the cause, focus that energy in the right direction. #peace"

Translation: "Oh God, make the people of Palestine victory, pride, victory, strength and prestige in the hearts of their enemies
Oh God, heal their wounded and release their families
Oh God, grant victory to their Mujahideen in your path, in your righteousness, in your blessings and in your spirit, O Lord of the worlds. Amen."

May we have your attention, please? In Palestine every day there is a new #GeorgeFloyd! Can you say something?

Many Qataris, as well as residents, took to the streets to express their solidarity with Palestine by waving the Palestinian flag on the afternoon of 11 May 2021 along the Corniche, The Pearl-Qatar and Katara.

Fares Dehbi who directed the music video, posted on his Instagram account: "Today is World Kufiya Day & Me and a group of talented singers from around the world based here in Qatar decided to stand together and sing the National Anthem of Palestine wearing the Kufiya. We hope our voice can amplify what’s happening in Palestine currently and reach people outside our community to understand the struggle of the Palestinian people. You don’t need to be Muslim to stand up for Palestine. You just need to be a Human. Music was our tool to spread awareness... show us your own tool to speak up for the ones who couldn’t stand for themselves in #SheikhJarrah"

The National Museum of Qatar is lit red to show solidarity with the Palestinian people being forced out of their homes in East Jerusalem. pic.twitter.com/IjoYwG0n8d

The National Museum of Qatar (NMOQ) was lit red to show solidarity with the Palestinian people being forced out of their homes in East Jerusalem.

A post shared by Museum of Islamic Art (MIA) (@miaqatar)

The Museum of Islamic Art (MIA) was lit red to show solidarity with the Palestinian people being forced out of their homes in East Jerusalem.

We have also changed our social media profile images to Red in support of the Palestinian people.

What do you think of the situation in Palestine? Do let us know in the comments section below! Do like and share this article- it keeps us going!