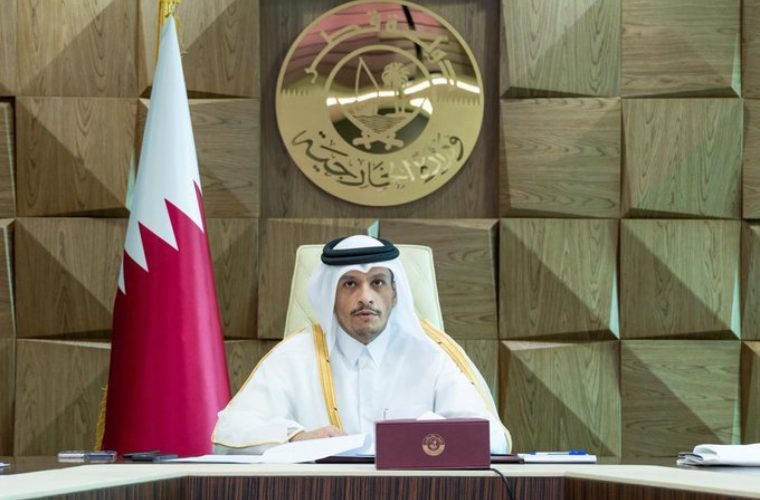 The State of Qatar stressed the importance of having a unified decision from all members of the Arab League to move actively on the international arena to support the Palestinian people and end Israeli aggression, which a lot of which can be categorized as war crimes, and prevent it from happening again.

This came during the speech of the State of Qatar given by H.E. the Deputy Prime Minister and Minister of Foreign Affairs Sheikh Mohammed bin Abdulrahman Al-Thani in the extraordinary session of the League of Arab States at the level of foreign ministers, which was held virtually under the presidency of the State of Qatar, the current chair of the council.

H.E. the Deputy Prime Minister and Minister of Foreign Affairs said that the occupied city of Al Quds and Al Aqsa mosque is seeing a ferocious escalation by the Israeli occupation, represented in raising the level of Judaization and illegal settlement that can only be described as ethnic cleansing of Palestinians and all that is not Jewish by Jewish settlers who admitted on camera to stealing Palestinian homes.

His Excellency added that the issue was not a matter of a single incident of owning a number of homes in Sheikh Jarrah neighborhood, but its part of a plan carried out by radical settlement groups in Arab neighborhoods, that consider it a religious and national duty to displace all Arabs and replace their places, supported by the Israeli government and Israeli law.

He added that Israel has carried out largescale operations of settlement and Judaization, and now they want the settlers' storming into Al Aqsa mosque and attacking of worshipers to become a common practice. His Excellency added that the Israeli occupation forces' storming into Al Aqsa mosque and terrorizing of worshipers with stun grenades and bullets, with complete disregard of the sanctity of the month of Ramadan and the feelings of Muslims all over the world, as if they are confident they will get away with these severe violations of human rights without being held accountable.

His Excellency said that the State of Qatar calls on Arab and Islamic countries, as well as the international community to stand up to these racist approaches that has been ongoing for decades and against Muslim and Christian holy sites, noting that a start to that would be ending all forms of support to the Israeli occupation's forces.

HE the Deputy Prime Minister and Minister of Foreign Affairs stressed that Israel's arbitrary shelling of Gaza yesterday led to deaths and injuries, which included women and children, describing it as a criminal attack that is condemning and will escalate tensions further.

His Excellency reiterated the State of Qatar's firm position regarding the fairness of the Palestinian cause and the rights of the Palestinian people, including their rights to religious practice and establishing an independent state based on the borders of 1967 with East Al Quds as its capital.

He said that the State of Qatar hopes the meeting will lead to an active and united Arab position to end these attacks and violations in support of the Palestinian people and those struggling for the sanctity of Muslim and Christian sites before their freedom and independence.

His Excellency said that the dangerous circumstances surrounding the Palestinian cause require all Palestinian factions to overcome their differences and unite to work for the common good in facing these violations together, in order to meet the aspirations of the Palestinians in ending the occupation that does not care for any law or even the entire international community.

His Excellency expressed his hope that the outcomes of the meeting can help boost the Arab and Palestinian positions on the international stage, and be the start of diplomatic work that protects the Palestinian people. He said that being united is the way to stop Israel's approach of imposing their own laws without regard for international law.

His Excellency saluted the Palestinian people in the occupied Al Quds, praising the legendary resilience against the occupation's bullets, and the martyrdom for their just cause of establishing an independent state with East Al Quds as its capital.