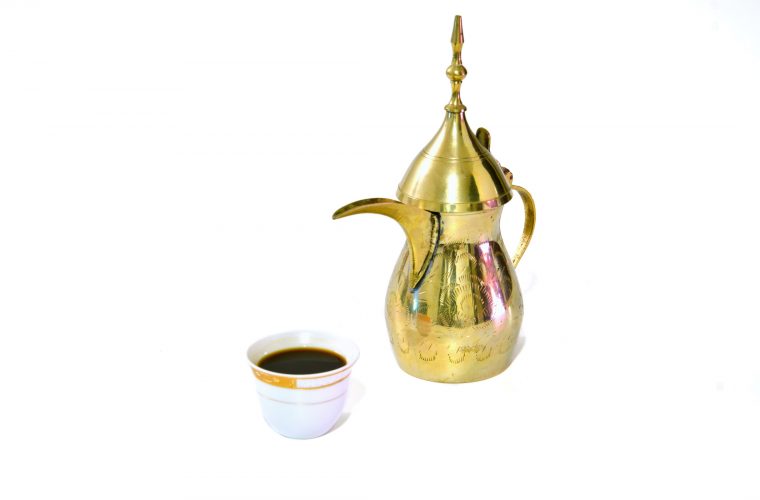 Arabic coffee is a Qatari must-have hot beverage that will delight your taste buds and awaken your senses. It’s made from Arabica coffee beans and tastes very different from the coffee we usually drink. It is served without milk and sugar; it has a unique taste that is light and yet full of flavor. Once you’ve tasted it, you won’t be able to stop.

Where it all started

It is believed that Arabica coffee came from Ethiopia where it may have been used as early as the 9th century. According to a well-known legend of the area, it is believed that a goat herder, Kaldi, observed how his goats became more active and energetic when they chewed certain beans. This intrigued him and experimenting with the bean led to the discovery that these coffee beans could be used to make an energizing beverage.

With time, the beverage made from the Arabica coffee beans became more refined and six centuries later, this coffee reached the lands of North Africa and the Middle East in the 15th century, where it became very popular at grand social functions and lavish feasts. It travelled to Europe and the Americas in later centuries, and slowly spread everywhere else. Today, it is drunk all over the world, not only because it’s energizing but also because of its rich and intense flavour.

How Arabic coffee came into being

With time, coffee made from Arabica coffee beans evolved with different regions making it differently in their own unique way with their own unique style. Arabic coffee, or ‘Qahwa’ as it is commonly known in Qatar is brewed from these Arabica coffee beans and is a flavoursome style of coffee that is unique to Qatar and other parts of the Middle East, where it is brewed and made in a way that brings out its exceptional aroma and gives it a more full-bodied flavor.

The Arabica coffee beans are methodically farmed at an altitude that falls between 1,200 meters and 1,500 meters. It is an incomparable coffee bean that makes up approximately 80% of global coffee beans production and is cultivated for its unique taste, enticing aroma and superior quality.

When Arabic coffee is served

Arabic coffee is an important symbol of Qatari hospitality and is traditionally served to guests in Qatar as a welcome drink during family gatherings, social functions, traditional feasts and special occasions like Ramadan and Eid.

It is also served in hotels in Qatar where you will find the aromatic drink at the entrance or in the lobby. This tradition of serving Arabic coffee to guests has been ingrained within the Qatari customs and is an integral part of its rich heritage and culture.

How Arabic coffee is served

Arabic coffee is served from a traditional coffee pot known as the ‘dallah’ in a mini delicate cup called the ‘finjaan’- that does not have a handle - and even that is not filled to the top. In fact, it is thought of as an insult if the cup is filled to the top. It should be filled upto 1/4th of the cup, so it is not too hot when the guest sips it.

It is customary to drink, at least, one cup of coffee, although three is a the favoured number.

The person who serves the Arabic coffee must always stand up straight while holding the ‘dallah’ in the left hand and then in a slightly inclined position when serving the ‘finjaan in the right hand to the guest. Each guest is served in the same way individually; the coffee is never poured into ‘finjaans’ and served in a tray. The guest must always drink from the right hand.

It is considered rude to refuse a cup of Arabic coffee offered by a Qatari. It may also indicate to the host that the guest wants something from the host and is not just there for a social engagement.

If a guest does not want any more coffee, he/she must jiggle the coffee cup towards the side.

How healthy is Arabic coffee

Not only does consumption of Arabic coffee minimize the start of illnesses like dementia, Type II Diabetes and cardiovascular disease, it can also help prevent some forms of cancer when taken in moderation. It’s great for healthy looking skin and can help relieve headaches, flu symptoms and chest congestion.

It is important to keep in mind though that Arabic coffee also contains caffeine and consuming excessive amounts of this Qatari traditional hot beverage may cause insomnia.

How Arabic coffee is prepared

Arabica coffee beans are easily available in most supermarkets and souks. They may be available as beans that you can grind yourself or in the ground form and preparing Arabic coffee is easy. It can either be made directly in the traditional ‘dallah’ or in a special Arabic/Turkish coffee pan with a long handle called the ‘cezve’.

Have you tried Arabic coffee or ‘Qahwa’ yet? Was it served to you in the traditional Qatari way? Did you enjoy it’s light, yet intense flavour? Did you drink it with a date or on its own? Let us know in our comments section. Like and share the article – it keeps us going!