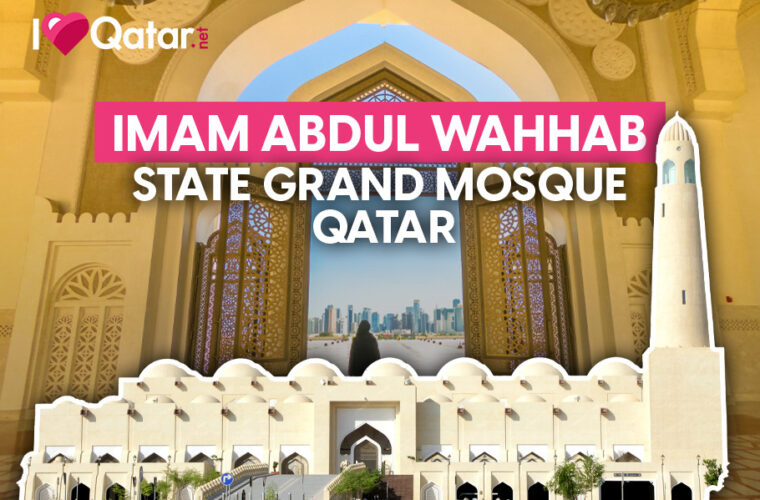 If you have been around Qatar for a while, you would have spotted the strikingly large and magnificent mosque known as the Imam Abdul Wahhab Mosque. It is also known as the Qatar State Grand Mosque.

The story behind the Imam Abdul Wahhab Mosque

The Imam Abdul Wahhab Mosque was opened to the public in 2011 by His Highness Father Amir, Sheikh Hamad bin Khalifa al Thani, the Amir at the time.

The original Grand Mosque was built by the founder of Qatar, Sheikh Jassim bin Mohammed Al Thani, who had the mosque constructed in memory of his father, who died in Sheikh Jassim's absence when he was away for a military campaign in the Zubara area of Qatar. He was told of his father's death when he returned from Zubara in 1878.

Refurbishment of the mosque began on 16 December 2006 to give it the look and feel that it has today at a total cost of QR 420 million riyals for the work.

The mosque gets its name based on Imam Muhammad Ibn Abd Al Wahhab (1703 – 1792), who was a well-known religious Muslim leader, reformer, theologian and pioneer during the 18th century who taught people to follow only the teachings of the Quran and the Sunnah (teaching and ways of Prophet Muhammad– PBUH). He belonged to the Najd area in the Central region of Saudi Arabia.

The façade of the Grand Mosque is made of sandstone and has preserved traditional features of Qatar's rich heritage and prolific history.

At night time, the mosque is lit up with strategically placed lighting that adds to the overall marvel of Qatar's most prominent mosque.

There are 93 domes in the Grand Mosque; 65 make up the mosque's outer quadrangle, while 28 larger domes protect the central hall.

The mosque has 20 entrances, of which three are main doors and 17 are side entrances. These entrances facilitate the large numbers of people entering and leaving the mosque during prayer times to avoid congestion.

The vast size of the mosque

The Grand Mosque is made up of an area that covers 175,164 square metres. It can accommodate approximately 11,000 men for prayers in its central hall and approximately 1,200 women in the special area adjacent to the central hall for women and the women's prayer hall located on the mezzanine storey.

Within the male area of the mosque, there is also a large courtyard area.

The Grand Mosque's interior is fully air-conditioned; the halls, walkways, prayer areas and library are airy and spacious. The ceilings are domed; the well-designed walkways and prayer halls are decorated with large beautiful chandeliers that light up the entire area illuminating the spaces that make up this Grand Mosque in the evenings.

The interior of the Grand Mosque exudes radiance and tranquillity and is painstakingly detailed. It is beautiful, elegant and yet simple and comfortable. The Grand Mosque comprises three storeys, including the basement, ground floor and mezzanine.

The floors of the prayer areas are covered with lush carpets for ease and comfort for those who come to pray, and there are lifts for those who need them to go up to the mezzanine storey.

The basement covers an area of approximately 3,853 square metres and comprises restrooms, a dedicated ablution (wudhu) area for men, and machines.

The ground storey covers an area of 12,117 square metres. It comprises the men's prayer hall, women's prayer area, a dedicated ablution (wudhu) area for women, and a special area that caters to other needs of women.

The mezzanine storey covers an area of 2,594 square metres. It comprises a prayer hall for women, a library and two special halls for Quran memorisation (one for men and the other for women).

The parking area covers an area of 14,877 square metres, so there is more than ample parking for those who come to pray in the mosque or visit it. There are 9 different parking spaces, including an indoor one, that can accommodate 300 cars each.

All visitors to the mosque, including those that are coming to perform prayers, are requested to follow the guidelines below:

If you are a non-Muslim and wish to visit the Qatar State Grand Mosque, entry is free, but some mosque etiquette and guidelines must be followed.

For a more guided experience, you can book a tour offered by the mosque authorities.

Alternatively, you could even book a guided tour through other tour operators in Qatar who will assist with the transportation, attire and tour guidance.

Have you visited the Qatar State Grand Mosque? What do you think of it? Which is your favourite mosque in Qatar? Do let us know your thoughts in our comments section. Like and share the article - it keeps us going!