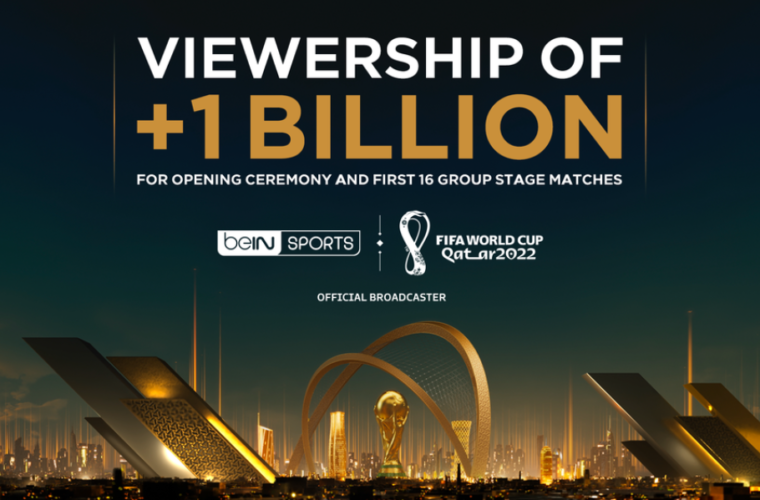 As per the reports of beIN MEDIA GROUP (“beIN”), the Official Broadcaster of the FIFA World Cup Qatar 2022™ revealed initial numbers showing more than a billion cumulative views of the opening ceremony and the first round of group stage matches on its flagship channel beIN SPORTS across the Middle East and North Africa (MENA).

“We are not surprised that the first World Cup in the Middle East is shattering regional viewership records with more than one billion cumulative views of the opening ceremony and first 16 matches. Football fans across the Arab World are some of the most passionate in the world, and we are delighted to be screening the tournament across the region as we continue to inspire, educate, and entertain as the tournament’s Official Broadcaster in MENA.”

According to IPSOS data, the official Opening Ceremony of the FIFA World Cup Qatar 2022™ was watched by 111.7 million adults across MENA. This figure show an increase of almost 6 times compared to the World Cup tournament in Russia in 2018.

In Group B, the match between Iran, another MENA representative and one of five competing in Qatar this month, against England was watched by more than 80.7 million viewers, including 60% of Iran’s adult population. On the other hand, Wales’ draw match against the USA was watched by 26.5 million on beIN SPORTS.

Saudi Arabia was recorded to have the second most-watched game of the tournament so far, with a total of 99.3 million viewers tuning in for their incredible 2-1 win against Argentina. Almost 18 million adults – equating to 71% of Saudi Arabia's total adult population – watched The Green Falcons’ most famous World Cup win to date. Meanwhile, 30.7 million people watched Group C rivals Poland and Mexico tie 0-0.

In Group D, Tunisia's match against Denmark saw 63.4 million viewers, including 75% of Tunisia’s adult population. 71.9 million then tuned in to witness the world champions France win their match against Australia.

In Group E, Japan’s shock 2-1 victory over four-time World Cup winners Germany was watched by more than 82.2 million people across the MENA region. 52.4 million then continued to watch Spain’s 7-0 demolition of Costa Rica.

The third most-watched game is Group G's Brazil versus Serbia match with 95.6 million viewers watching. 11.1 million had earlier seen the group’s other match between Switzerland over Cameroon.

And, lastly, in Group H, a total of 64.9 million watched Cristiano Ronaldo make history by becoming the first player to score at five FIFA World Cups as Portugal beat Ghana 3-2, while 8.1 million had tuned in earlier in the day to watch Uruguay play out a 0-0 draw with South Korea.

RELATED: beIN SPORTS to broadcast 22 matches of the World Cup for free