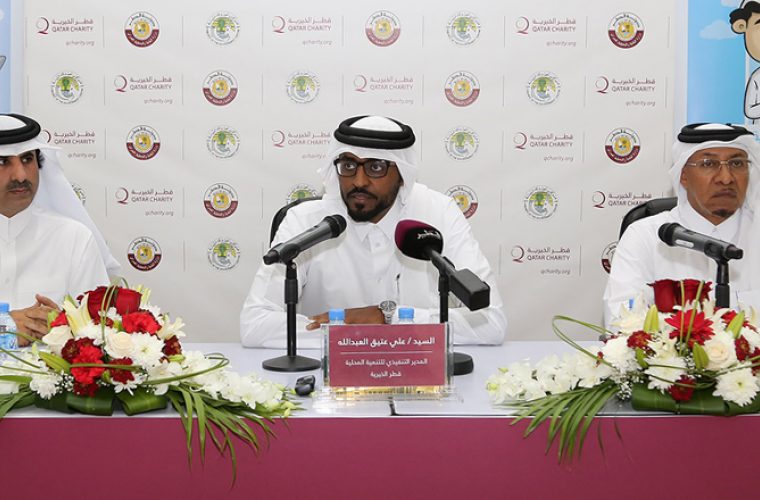 In cooperation with Environment Friends Center and Al Wakra Municipality, QC inaugurated a competition entitled 'Climate Change Summit Simulation' whose purpose is to raise social awareness about global warming and climate change as the Qatari Day of Environment approached.

Mr. Ali said, "'Climate Change Summit Simulation' competition aims at raising the awareness of the families about climate change. The world is in continuous environmental change, which is why we need to be more informed about global warming. It is the responsibility of everyone."

This competition was inaugurated on the same day of Qatar Environment Day which is in February 26. "It is also on the same day of Qatar Arabic Language Day. More competitions will be inaugurated and will be held across the country. We thank Environment Friends and Al-Wakrah Municipality for their cooperation with QC and their strategic partnership whose impact is in favor of the development of the local community. They also help in raising the awareness of the people in all fields," said he.

Mr. Al Hajri started his talk commending QC's efforts and how it represents the bright side of Qatar through its work in the humanitarian field and in reinforcing Islamic values. "We thank the Municipality of Al Wakra which offers its services to the citizens and residents. It provides a healthy and clean environment that makes people happy and healthy. Climate change is a great concern for the coming generations. Mankind's only option is to behave in a better way towards the environment," said he.

Climate change, as he mentioned, has multiple dimensions of religion, behavior and morals. "The country's power springs from its community's. A sound mind in a sound body," he added.

He also pointed that 'Climate Change Summit Simulation' competition reflects the idea of sustainable development. It also reveals the different opinions of the countries in facing the challenges of climate change. In addition, it aims at improving the skills of convincing, arguing, and using solid evidence; at reinforcing the spirit of cooperation and family team work; and at training people to use the language eloquently.

Regarding the competition's participants, he said that it included the people of Wakra, Al Wukair, Barwa and Mesaieed. The countries the families represented were Brazil, Singapore, Morocco, Saudi Arabia, Russia, Norway, Seychelles and India.

Mr. Jaber spoke about the Holy Quran and how it had already mentioned climate change which would be caused by humans to the land and sea. "It is mankind's responsibility to protect the environment. People are the only creatures capable of making the right decisions and finding the best solutions once they understand the how serious the situation is. If we continue to misbehave with our environment, things will worsen. Solving environment-related problems must be a priority to achieve sustainable development, one that is harmonious with Qatar National Vision 2030. It is what we aspire to achieve through our partnership with QC and Environment Friends."

He emphasized the Municipality's willingness to support QC through the Community Development Center in Al Wakra in whatever serves the public interests.

Working for a Dignified Life

For her part, Ms. Alia', said that the center's participation was out of national duty towards Qatar. "Qatar deserves the best. We have to protect its environment and resources through celebrating environmental events. We presented to the people a distinguished family competition through which we could raise awareness about the environment and enrich the people's environmental knowledge. We have included the families, the parents and the children so that more ideas and solutions would be suggested to save the environment. Because of the bad behaviors of some people, the environment is in bad conditions. With the help of everyone, that could stop; and the environment could be saved."

The competition is in Arabic. Every member of the family must speak about a certain aspect for 3 minutes. The aspects include: an introduction, possible consequences, solutions, and recommendations. The participants must be committed to logic and subjectivity in presenting their opinions. They have to support their participation with evidence, proofs, and statistics. 4 judges will be assessing the participants. The results will be final and are unappealable. The first three winning families will receive financial rewards (5,000 QR, 3,000 QR, 2,000 QR). All participants will receive participation certificates.