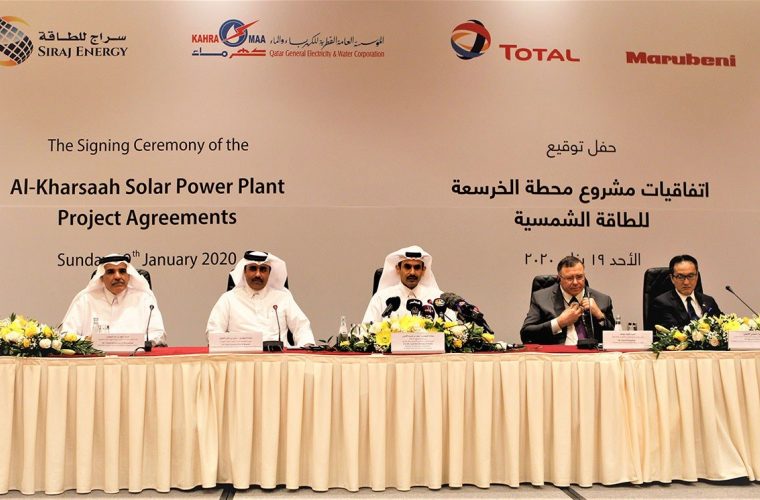 HE Al Kaabi's remarks came Sunday at the press conference, held on the margin of the signing of agreements, pursuant to which Qatar General Electricity and Water Corporation (Kahramaa) in its capacity as the Transmission and Distribution System Owner and Operator (TDSOO) in the State of Qatar will buy electricity from Siraj1, which is owned by Siraj Energy (60%) and a consortium of Japan's Marubeni Corporation and France's Total Solar International (40%).

The project follows a Build, Own, Operate, and Transfer (BOOT) model and has a term of 25 years, after which the ownership will be transferred to Kahramaa.

H.E. Minister Al Kaabi said, "This plant is the first of its kind in the State of Qatar with a total capacity of 800 MW which equals about 10% of Qatar's current peak electricity demand. The project is also part of our efforts to conserve energy and protect the environment in a manner that strikes a balance between the needs of the current generation and that of the future generations as stipulated by Qatar National Vision 2030."

"This project comes in implementation of Qatar's policy to diversify the production of energy and to increase reliance on and the efficiency of renewable energy, which is a basic cornerstone for a sustainable future for the generations to come," he said

"This project also comes as part of the energy sector's contributions towards Qatar's commitment to host the FIFA 2022 World Cup. It will generate about 8 times the size of the solar energy Qatar had pledged to build, helping the organization of a carbon-neutral event," he added.

He indicated that optimizing the use of the area, and other elements such as cost and technology used were taken into account in the project's specifications.

On the possibility of using wind energy as a renewable source to produce electricity alongside solar energy, HE Minister Al Kaabi answered that this matter is difficult to achieve in the State of Qatar because the wind is not continuous for most of the year, saying that "about 12 years ago I participated in a committee to assess the best renewable source in the production of electricity in the state and at the time the committee decided that it was the solar energy.

HE Minister of State for Energy Affairs Eng. Saad bin Sharida Al Kaabi also expressed his aspiration to establish several similar projects in several parts of the country within the framework of Qatar's endeavor to diversify its sources for the production of electric energy. "The success of this project will be taken into consideration, being the first of its kind in the State of Qatar," he said.

KAHRAMAA President HE Eng. Essa bin Hilal Al Kuwari said, "Monitoring the recent developments in solar panel manufacturing including their improving efficiency and decreasing costs, and considering the natural gas quantities that can potentially be saved and the associated emissions reductions, KAHRAMAA has decided to go forward with a utility-scale solar power plant."

HE Al Kuwari added, "KAHRAMAA requested bids, attracted bidders, and completed the prequalification of 16 leading international Solar Power Developers, evaluated the technical and commercial offers, and succeeded in obtaining a competitive unit price for electricity produced from the Solar PV Power Plant, which price is currently the lowest in the world for such a project."

Fahad bin Hamad Al Mohannadi, the General Manager and Managing Director of Qatar Electricity and Water Company (QEWC) and member of the Board of Directors of Siraj Energy stated, "Al-Kharsaah Solar PV Power Plant is considered an achievement at the regional level. The project will include the application of the latest solutions and innovations in solar energy technology, including the use of dual panels, utilizing state-of-the-art automated systems to track the sun and the use of robots in the continuous cleaning of solar panels to ensure the continuity of production efficiency and reduce plant operating costs. I am proud of this achievement in the field of renewable energy, which comes in the context of the Qatar Electricity and Water Company's strive to be a leader in everything it is involved in."

Qatar Petroleum (QP) and Qatar Electricity and Water Company (QEWC) have established a joint venture company for the generation of electricity from solar power, with QP holding 40 % and QEWC holding 60 % in the JVC titled SIRAJ ENERGY. The formation of this new entity is based on the Vision of HH the Amir to develop Renewable sources of energy as part of the energy mix and aimed at environment-friendly technologies. It is aimed at diversifying the sources of energy production and increasing reliance on renewable sources.

The agreements were signed by HE Eng. Essa bin Hilal Al Kuwari the President of KAHRAMAA, Fahad bin Hamad Al Mohannadi, the General Manager and Managing Director of Qatar Electricity and Water Company and member of the Board of Directors of Siraj Energy, Masumi Kakinoki, the President and CEO of Marubeni Corporation, and Patrick Pouyanne, the Chairman and Chief Executive Officer of Total. The ceremony was attended by dignitaries, experts, diplomats, and senior officials of the signing parties.

With an estimated total cost of QR 1.7 billion, the Large-Scale Solar PV Power Plant will be constructed at Al-Kharsaah area west of Doha on a 10 square kilometer land plot.

Masumi Kakinoki, the President and CEO of Marubeni Corporation said, "First, I would like to express my sincere gratitude to Kahramaa for selecting Marubeni to lead Al-Kharsaah Solar PV Power Plant Project. As part of the promotion of sustainable development and the fight against climate change, Marubeni aims to help realize a decarbonized society. As such, we are targeting an approximately 20% increase in the ratio of power generated by renewable energy sources in our net power supply by 2023. We will work hard to make this project successful, thus contributing to the further development of Qatar and the achievement of the Qatar National Vision 2030."

Patrick Pouyanne, the Chairman and Chief Executive Officer of Total said, "We are extremely proud to develop Al-Kharsaah Solar PV Power Plant alongside Marubeni and Siraj Energy. Total is committed to better energy that is safer, more affordable and cleaner and has the ambition to expand its footprint in renewables to 25 GW by 2025."

Pouyanne added, "We support Qatar's drive to develop renewable energy in line with Qatar National Vision 2030 and we will bring the best of our expertise and technical know-how to ensure the success of the project."

With this project, KAHRAMAA managed to avail competitive power generation prices, save significant natural gas quantities used in traditional power generation, reduce carbon and other emissions and preserve the surrounding environment. During the project lifetime, the plant will contribute to reducing 26 million tons of CO2, which aligns with the objectives of the national program for conservation and energy efficiency "Tarsheed" to reduce 1 million tons of carbon emissions annually until 2022.

KAHRAMAA had announced Requests for Bids (RFB) to build Qatar's first large-scale solar photovoltaic (PV) power plant in the first half of 2019. 16 international Solar Power Developers were prequalified by KAHRAMAA. 5 competitive bids were received, which is a high number of bids considering the nature of this project, and which reflects the strength and attractiveness of Qatar's electricity market and the global interest to invest in the country.