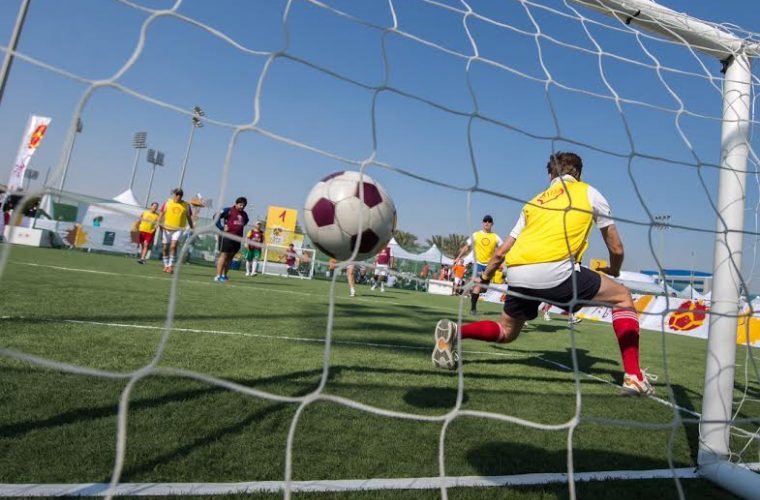 Ismael part of the Qatar team that compete in the FIBA 3x3 All Stars tournament on the 11th December 2015 in Al-Gharafa Sports Club, while Mirza, Shammari and Hammad are part of the 14 Qatari fencers who will compete in the Fencing Grand Prix event from the 4th to 7th December in Ali Bin Hamad Al-Attiyah Arena.

Speaking at the media briefing, which was hosted at the QOC’s headquarters, Hamad Al-Obaidly said:

“Qatar has many talented, up and coming athletes that have emerged through our extensive, grass-roots sport development program. This has been a great year for sport in Qatar, with Doha hosting three major World Championships including the 24th Men’s Handball World Championships, the AIBA World Boxing Championships and the IPC Athletics World Championships – all of which were hosted in the Middle East for the first time in history. We hope that hosting these events will inspire new athletes and create new sporting heroes. By hosting these monthly media briefings, we also hope to support our aspiring athletes and shine a spotlight on the hard work that has resulted in them representing Qatar. They deserve and need the support of all in Qatar if they are to go on and fulfil their personal ambitions and that of this passionate sports nation - more so now that the Rio 2016 Olympic and Paralympic Games are mere months away.”

The QOC regularly host these media briefings in a bid to provide more information on the array of sporting events that are hosted in Qatar each month, as well as to introduce Qatar’s rising star athletes to the media. The Qatar Olympic Committee is keen to shine the media spotlight on Qatar’s emerging sporting heroes and encourage the community to support them as they progress on their sporting journeys. The QOC and the athletes will also be documenting their progress online and through digital media so that the public can follow the stories of Qatar’s sports stars and share pride in their achievements.

Al-Obaidly took the media through the upcoming Champion of Champions Modern Pentathlon event, which will be held in Al-Shaqab Center from 27th to 28th November and will see the world’s best 18 male and 18 female athletes compete. He then provided information on the FIBA 3x3 All Stars tournament, after which he held a discussion with Qatari basketball icon Ismael, who is currently ranked 1st in Qatar and 13th worldwide. Al-Suwaid of the Qatari Fencing Federation gave information regarding the Fencing Grand Prix and held a discussion with upcoming fencers Al-Mirza, Al-Shammari and Hammad.

Commenting on the FIBA 3x3 All Stars, Yasseen Ismael said:

“I started 3x3 in 2013 in the Club Championships in Qatar, after which we played in the GCC Championships in the UAE where we placed first and we kept improving our performance with every competition culminating in the 2014 World Championships. We took first place in the Championships despite participating thanks to a wild card. We were placed in a very difficult group up against some of the best teams in the world including Romania and Argentina. Despite this we still managed to make it past the knock-out stage and take the championship title.”

The FIBA 3x3 All Stars Tournament was first hosted in Doha in 2013, and will be held in Qatar until at least 2020. Six teams from around the world will compete in the tournament, including the first ranked players from Qatar, Europe, the Americas, and the rest of the world as well as the first ranked team at the FIBA 3x3 World Tour. Prior to the Tournament, the first ever FIBA 3x3 Awards will be hosted on 10th December at Katara Cultural Village and will honour players, as well as FIBA 3x3 associations.

“Moving from the junior to the senior class was a very hard transition for me. The competition became much more difficult and it required even more effort to retain and improve my position on an international level so I am extremely thankful for all of the support offered by the Qatar Fencing Federation. I would like to encourage all girls to take up sport as Qatar is at the forefront of female participation in sport in the region and all aspiring female athletes have unprecedented opportunities to benefit from this. ”

Hosted by the Qatari Fencing Federation since 2012, the Fencing Grand Prix will see some of the world’s greatest epee fencers compete head to head. This year’s edition will feature 169 fencers – including world number 1 female epee fencer Xu Anqi - from over 21 countries take part in the competition, which will be held in the state-of-the-art Ali Bin Hamad Al-Attiyah, with the finals hosted at the Gate Mall in West Bay. Team Qatar consists of 14 fencers including Al-Mirza, Al-Shammari and Hammad.

Commenting on his experience in the 2014 Asian Games, Mohamed Al-Mirza said:

“I started fencing when I was still in school once the Qatari Fencing Federation was established and have not stopped since. I participated in many championships, most recently in the 2014 Asian Games which is considered one of the flagship Asian tournaments. I benefited greatly during my competition in the 14th Asian Games in Incheon where I placed 15th in a very competitive field.”

“We have hosted the Fencing Grand Prix since 2005 and have seen it grow to from 150 participants to over 500 fencers from 50 countries from around the world. This is a testament to QOC and the Federations commitment to develop fencing locally and internationally. We wish all fencers the best of luck in the Grand Prix.

The events and athletes that the media have been introduced to today are just a few examples of Qatar’s progress in developing sport and each monthly media briefing will provide further insight into Qatar’s rising stars and the QOC’s work to support them and develop sport across Qatar and globally. The next local media briefing will take place in December and further details will be circulated in due course.