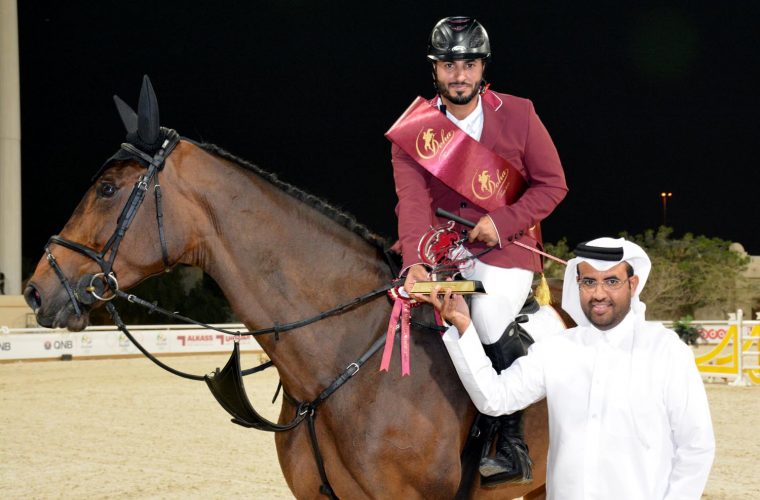 Qatar’s ace jumper Ali Yousef Al-Romaihi and Gender won the Grand Prix of Doha Tour at the outdoor arena of the Qatar Equestrian Federation yesterday. Yousef took the top prize of QR 50,000 for his winning effort.

The talented Ali Yousef made a slow and comfortable start in the first round with a clear round and a timing of 79.79, which qualified the champ for the jump off.

The Qatari rider was confidence personified as he ventured into the jump off and completed a clear round in an unbeatable time of 31.20 seconds. Khalid Al-Emadi astride Tamira took the second place while completing the round in 31.73. Abdullah AlSharbatly on Sacramento also went through with a clear round clocking 33.76 seconds to take the third place. Al-Emadi collected QR 40,000 for the second place, while Abdullah took QR 30,000 for third place.

“We are glad that the Doha Tour will be stages in three rounds from next year. It will also be an international championship. It will be more exciting and the exposure for our riders will be very good. They can develop into top class jumpers as they progress up the ranks.”

Qatar’s Saeed Nasser Al-Qadi astride Jessico 4 put in a dazzling display while taking the first place in the Accumulator with Joker Class 5 120/125cm. Lekhwiya’s Saeed clocked a timing of 50.28 with a clear round ahead of Qatar’s Ali Yousef Al-Malki (Diamond Delma) 51.88 and Ahmed Mohammed Al-Badi astride Antine Drumes (54.33).