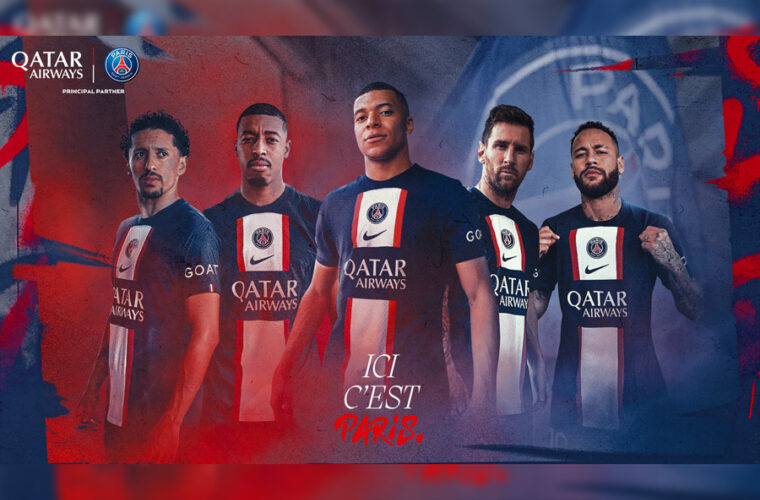 We enter a special era with Les Rouge-et-Bleu 🔴🔵
#QatarAirways are the Official Jersey Partner of @PSG_English ✈️ pic.twitter.com/nsYQ7SSXcP

Premium partner of Paris Saint-Germain since 2020, Qatar Airways, voted the world’s best airline for the sixth time in 2021, becomes the new official front-jersey sponsor of the Parisian club, starting with the 2022/23 season. As part of the multi-year deal, the airline’s name will appear on the famous Rouge & Bleu jerseys of the men’s, women’s and youth professional teams. Together Paris Saint-Germain and Qatar Airways are eager to offer innovative content and ever more inspiring experiences to football fans worldwide.

New phase in the relationship

This announcement marks a new phase in the relationship between the French capital club and the leading global airline. Paris Saint-Germain will play an important role in Qatar Airways’ extensive sponsorship portfolio and will connect and engage its brand with the club’s hundreds of million fans world-wide, whilst providing unique experiences to reward its Privilege Club members – which will become the Official Frequent Flyer Programme of Paris Saint-Germain. Additionally, Qatar Airways Holidays will be offering official Paris Saint-Germain fan travel packages, bringing football enthusiasts from around the globe to Paris, to enjoy the city and see some of the best players in world football.

Meanwhile, Hamad International Airport (HIA) in Doha, voted World’s Best Airport for the second time in a row, and Qatar Duty Free (QDF) will be the Official Airport and Official Duty Free respectively of Paris Saint-Germain. QDF will also be expanding the Club’s official fan store in the airport to provide fans with the opportunity to secure a wider range of official club merchandise.

The airline’s visibility will also be stepped up in the Parc des Princes stadium with additional LED exposure and upgraded VIP hospitality experiences.

"The announcement of a new jersey partner is a milestone for the club," said Marc Armstrong Chief Partnerships Officer of Paris Saint-Germain. "We are delighted to see Qatar Airways step up their commitment to the Paris Saint-Germain family. Qatar Airways are extremely involved in sport. It is an ambitious airline, one of the most acclaimed in the world and by featuring on the Rouge & Bleu jersey, Qatar Airways will increase its global visibility and integration into football just a few months before the World Cup starts in Qatar and way beyond it too."