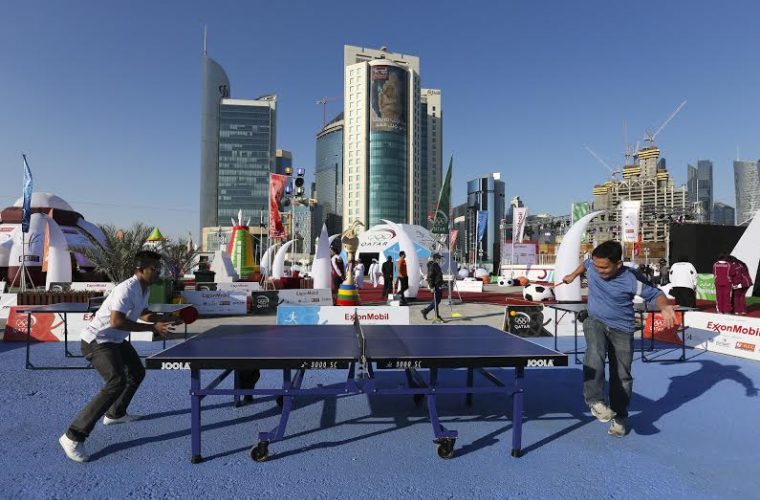 The festivities around Qatar’s biggest ever National Sport Day have begun with the opening of the newly developed Qatar Olympic Sport Zone, near Doha’s main post office. The interactive Sport Zone will be open from 3pm to 8pm daily from now through to the end of National Sport Day on the 11th of February, with countless free activities and entertainment for every age and fitness level. Boasting an unrivalled schedule of free sporting events across the country, National Sport Day aims to give the people of Qatar an opportunity to kick start a future of healthy living with the Qatar Olympic Committee Sport Zone acting as a main hub in Doha. Ensuring the whole of Qatar can celebrate sport together in a festival atmosphere, the Sport Zone will allow everyone to see and learn basic skills in 8 key sports including basketball, shooting, table-tennis, handball and football while providing fun and games for all the family. There will also be a focus on healthy eating and general wellness as the celebrations to highlight the importance of healthy living reach a new peak. Speaking at the opening of the Qatar Olympic Committee Sport Zone the assistant secretary general for administrative support Mashaal Bin Nasser Al Khalifa said: “The celebrations for the National Sport Day have officially begun and we are immensely excited. The Qatar Olympic Committee Sport Zone is bigger and better than ever with entertainment and exciting sporting activities for everyone. Our aim is to introduce as many people as possible to a whole range of sports with demonstrations and skill sessions. This way we hope to get all of Qatar trying new sports, meeting new people and taking steps towards an even healthier lifestyle.” Based on the sporting principles of inclusion and unity, participation and fun, fitness and health, National Sport Day has cemented its status as one of the highlights of Qatar’s community, sporting and national calendars with the opening of the QOC Sport Zone heralding the start of the 2014 celebrations. Mashaal Bin Nasser Al Khalifa added: “The reception from the public has been fantastic already and we look forward to welcoming everyone to the Sport Zone over the coming days. The key for us was to provide an entertaining and fun environment for all of Qatar in the build up to, and on the day of, National Sport Day. With so much happening over the next few days there is guaranteed to be something for everyone regardless of their age of sporting abilities; for us it’s about bringing the country together, uniting everyone through sport.” Open from 3pm to 10pm daily, and from 8am to 10pm on National Sport Day, the Qatar Olympic Committee Sport Zone welcomed crowds of people on Thursday afternoon, keen to get warmed up ahead of the day of celebrations. After entering the Sport Zone for the first time and seeing the extensive program of events the public were vocal in their support. Arwad Mahmoud said: “I didn’t realise just how much was happening down here and the area looks fantastic. I saw the list of sports which were being taught to beginners like me and just wanted to take advantage. I’m a big sport fan but it’s clear after visiting the Sport Zone that there truly is something for everyone.” Alongside the Qatar Olympic Committee Exxon Mobil has led the calls for the community to get active, healthy and take part in the wide range of free sporting events planned across the country, continuing in their generous support as official sponsor for a third successive year. “We readily support excellence in sports and healthy living in the State of Qatar and are proud to do so in partnership with the Qatar Olympic Committee,” said Bart Cahir, President and General Manager of ExxonMobil Qatar Inc. Featuring a traditional boat race and the legendary sport walk, as well as the biggest ever line up of free events, 2014 is set to be the largest and most widely celebrated day of sport ever witnessed in the country. Kickstarting the festivities will be the opening of Qatar Olympic Committee’s specially built sport zone which will welcome all from the 6th of February. Along with the extensive sporting events across the country, National Sport Day will also focus on Qatari culture with a traditional Al Shawahef rowing championship opening proceedings on the day. The event will act as a reminder of Qatar’s sporting ancient sporting heritage and the role it has played in the country’s most recent sporting developments. Official participating venues for the event include; Aspire, Katara, The Pearl, Souq Waqif, Al-Refaa Street and many more. - ILQ News -