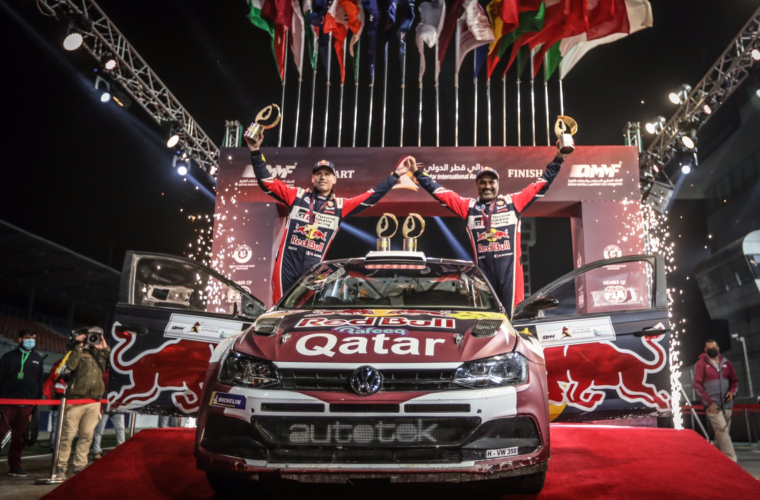 Driving his customary Autotek Volkswagen Polo GTI, Al Attiyah only hit the front on the eighth of 12 gravel special stages in the Qatar deserts and survived a front puncture in stage nine to press home his advantage over the final three stages. Mads Ostberg pushed him all the way to the penultimate stage, but Al Attiyah hung on doggedly and eventually secured a winning margin of 4min 38.4sec after the Norwegian retired.

The success was a 28th for co-driver Mathieu Baumel in the MERC and his fifth in Qatar, while Al Attiyahs 80th success as a driver equaled the number of wins achieved last month by French legend Sébastien Loeb in the FIA World Rally Championship.

Al Attiyah, who duly extended his lead in the regional series, said:

"It is a good feeling. I am really happy to win Qatar Rally. This is my home and in front of my people. This was not an easy race. It was tricky. The pace that we did from yesterday to today, me and Kris and Mads, was very hard. This was a fantastic win. I was trying to keep one pace. It was amazing."

Ostberg and Ilka Minor certainly took the fight to Al Attiyah, led overnight and extended their advantage on the first stage of the morning. The Norwegian lost his way for a few seconds in stage eight and then a rear puncture cost him his lead before the regroup.

He pushed hard during the afternoon to try and hunt down a charging Al-Attiyah, but it was in vain and a heavy impact in the penultimate stage damaged the Skoda Fabia R2 evo, caused a water leak from a fractured pipe and sidelined the former FIA WRC2 World Champion within sight of the finish.

Oman's Abdullah Al Rawahi was patient and stayed clear of trouble as chaos ensued around him. He and Jordanian co-driver Ata Al Hmoud were rewarded with a stunning second place in their Oman Rally Team-run Skoda Fabia R2 evo and a useful haul of championship points.

Andorra-based Ulsterman Kris Meeke and co-driver Chris Patterson led after two stages on Friday before rolling out of contention for the win in stage four. Meeke climbed from fifth to third during the final day and then overcame a damper issue on the final loop of three stages to regain third overall and the final place on the podium.

Kuwait's Meshari Al Thefiri was the class of the MERC2 field in his fourth-placed Mitsubishi Lancer Evolution X. He and co-driver Nasser Al Kuwari completely dominated the category to secure a winning margin of 11min 56.5sec over Oman's Zakariya and Mohammed Al Aamri.

Ahmed and Firas Allouh overcame a dramatic first day of the Qatar National Rally to edge the win over their Qatari Can-Am rivals, Ahmad Al Muhannadi and Mubarak Al Khelaifi. Lebanon's Kahy dropped 17 minutes to his rivals on the first run through Umm Birka and finished third

Photos taken during the crowning of winners in 2022 Qatar International Rally, the 2nd round of the Middle East Rally Championship#FIAMERC #QatarInternationalRally2022 #QMMF pic.twitter.com/oTFDkrJI0D