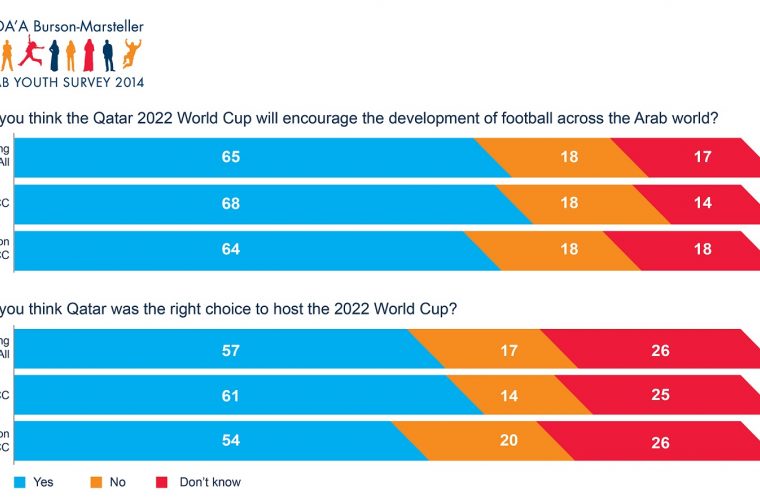 Over half (57 per cent) of young Arabs believe Qatar was the right choice to host the 2022 FIFA World Cup while two thirds (65 per cent) think the tournament will encourage the development of football across the Arab world, according to the findings of the 6th Annual ASDA's Burson-MarstellerArab Youth Survey.

Qatar beat off bids from Australia, Japan, the United States and South Korea for the right to stage the 2022 FIFA World Cup. The Arab Youth Survey is an annual initiative of ASAD'A Burson-Marsteller,the leading public relations consultancy in Middle East and North Africa (MENA).

The survey was developed to provide reliable data and insights into the attitudes and aspirations of the region’s 200 million-strong youth population – with 60 per cent below the age of 25 – with the aim of informing policy and decision-making of both government and the private sector. Research was conducted between December 2013 and January 2014.

Sunil John, Chief Executive Officer of ASAD's Burson-Marsteller said: “Support for a Middle East FIFA World Cup remains high across the Arab world with two thirds of all youth agreeing that Qatar’s hosting right will encourage the development of football across the region. Despite the ongoing controversy surrounding the bid, there appears a great deal of optimism amongst youth that the Gulf state was the right choice to host the tournament.”

In-depth results from the 6th Annual ASDA’A Burson-Marsteller Arab Youth Survey, including survey highlights and a white paper in both Arabic and English, as well as findings from all previous five editions of the survey are freely available on www.arabyouthsurvey.com