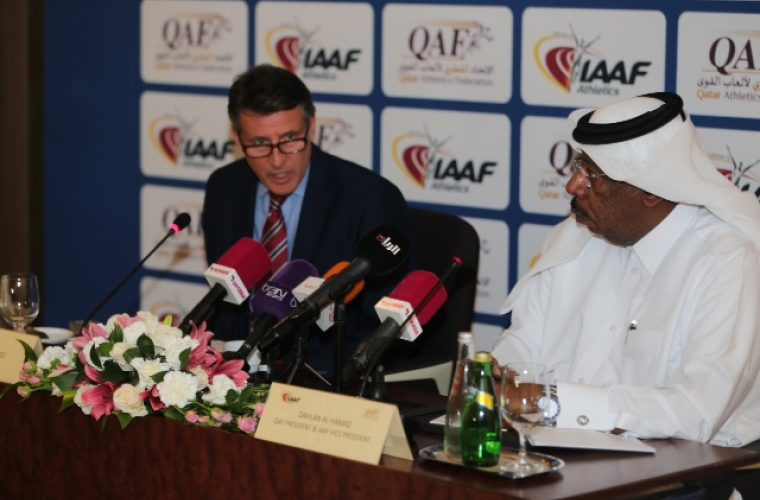 Almost 100 days before this year’s first Diamond League and one month before the 7th Asian Indoor Athletics Championships, which will both take place in Doha Lord Sebastian Coe visited the capital of Qatar in his first official appearance as the new Diamond League Chairman.

Lord Coe said that the whole Diamond League project needs to be reviewed along with all stakeholders, especially the 14 host cities, the co-organisers and IAAF’s closest partners.

“We need to attract more audience, to take the popularity of the event to the next level,” added Lord Coe.

“It is a great honour for us to have the IAAF President in Qatar and launch the 2016 Diamond League season from Doha, almost 100 days before the opening competition of the top-tier athletics circuit, which traditionally begins from Doha.

“QAF is annually being tested and kept “warm” with the hosting of the Diamond League every May. This top-tier competition helped Qatar sensationally established as a major athletics hub back in 2010, when Doha staged the IAAF World Indoor Championships and a couple of months later the first ever Diamond League meeting. Both events were concluded with unparallel success and earned praise from IAAF officials and various major international media.”

Mutaz Barshim is back

After missing the 2015 edition of the Doha Diamond League, due to the absence of high jump from the schedule, local and international star Mutaz Barshim is expected to return on home turf this season, in a year that Diamond League collides with the Olympic Games.

Lord Coe insists that this not only won’t affect competition, but, on the contrary the Diamond League series could very well work as the means to raise interest ahead of the Olympics.

“People could have the chance to see the potential Olympic stars, like Mutaz Barshim, who is the face of Qatar in athletics, a homegrown talent brought up in Aspire Academy. Mutaz’s example showcases that even smaller nations can show results when they invest.”

Lord Coe, a former Olympic winner and world record holder, claims that coaching, “the heart of the sport”, is an extremely important factor, and that world class educated coaches are essential for all countries who seek to produce international athletes.

A strong Asia important for athletics

Speaking about the potential of Asia to play a significant role in the future, Lord Coe expressed his desire to see the world’s largest continent advance:

“IAAF needs to actively demonstrate that we are a global sport with 209 members. I want to see more nations getting athletes to the finals. Asia is a large continent and we need to be very clear to define Asia. We need to make sure our development programme is appropriate to the specific needs of a continent which encompasses well over 40 member federations.”

QAF President and Chairman of the Doha Diamond League Organising Committee Dahlan Al Hamad revealed at the press conference the recent agreement between QAF and the Qatar Olympic Committee administration for mutual actions towards not only the forthcoming meeting in May, but also the 2019 IAAF World Championships:

“The Doha Diamond League is rated by IAAF and global media as a one of the best in the series, but we know that there is always room for improvement and our aim is to work even harder in order to remain at the top. In this direction and with our minds set on the 2019 World Championships, we have joined forces with the newly elected Qatar Olympic Committee administration.

“I am certain that with team effort and our expertise we will inaugurate the close collaboration with QOC with a successful and memorable Diamond League great opening here in Doha on May 6 and that this partnership will be culminated in 2019 with the IAAF World Championships.”