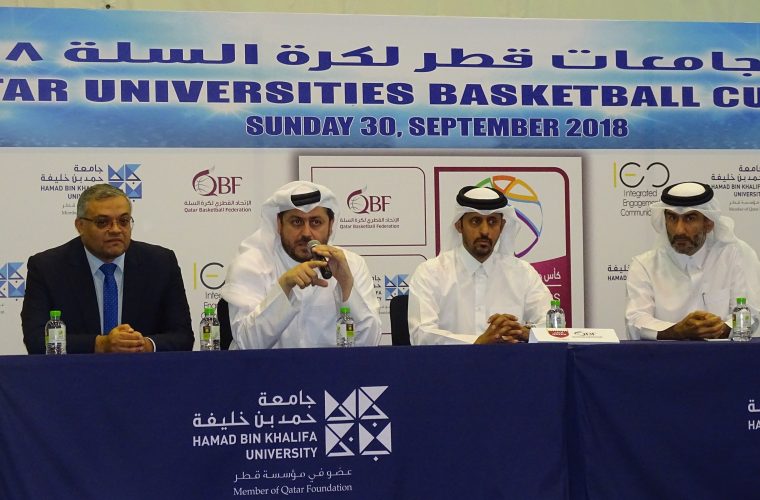 Qatar’s basketball sector has gained increased institutional traction following the announcement of the launch of Qatar Universities Basketball Cup 2018 – a joint venture between Qatar Basketball Federation (QBF) and Hamad Bin Khalifa University (HBKU), a member of Qatar Foundation (QF). The second of its kind, this year’s tournament will feature men’s and women’s divisions from various universities, who will be fending for the championship.

The 2018 tournament, which will be in partnership with the Qatar Basketball Federation, was launched during a press conference at the Education City Student Center. The event was attended by representatives from both organizations: Mr. Abdulrahman Al-Hitmi, board member of QBF and Mr. Adam Al-Saadi, director of community outreach and student relations at HBKU. At the launch of the tournament – which is to be organized by Joe Kharrat, general manager of the event partner, Integrated Engagement Communications – distinguished guests and media personnel learned more about the registered university teams, game schedule and overall tournament set-up.

HBKU and QBF’s strategic partnership dates back to the two national powerhouses’ Memorandum of Understanding, signed in September of last year, which underlined a mutual effort towards the development of basketball participation and competitions for university students in Qatar. Commenting on the far-reaching significance of national participation in sports competitions, Mr. Adam Al-Saadi said: “Following the success of last year’s inaugural basketball tournament, we are looking forward to another exciting competition amongst our nation’s promising youngsters. From an educational perspective, group sports such as basketball draw people together and create a unique atmosphere of camaraderie, while fostering diligence and competitive spirit.

“These are integral values that establish a platform to awards and recognize university talent with a particular view towards the government’s commitment to an upgraded cultural enrichment and sports excellence sector, which was underlined in the Second National Development Strategy as it was released in May of this year.”

Speaking about the importance of the occasion, Secretary General of the Basketball Federation Ali Al-Maliki said: “This is an important milestone seeing how the establishment of a basketball league for universities can engage a wider audience and highlight the significance of the game. We’re especially proud of the distinguished female and male players who are set to take part in this competition.”

According to the organizers, the first match will kick off on Sunday, September 30. Two games will be played each day, four nights per week, over a period of eight weeks until the grand finale on Monday, November 19, 2018. Both the men’s and women’s divisions will have seven teams respectively with players hailing from Carnegie Mellon University in Qatar, College of the North Atlantic – Qatar, Georgetown University Qatar, various HBKU colleges, Northwestern University in Qatar, Qatar University, Texas A&M University at Qatar, VCUarts Qatar and Weill Cornell Medicine – Qatar, in addition to many other universities in Doha.

In the lead-up to 2022 FIFA World Cup in Qatar, the nation is witnessing transformative growth and diversification in its cultural and sports industries. Basketball in particular has been particularly highlighted as a popular leisurely activity with a growing number of local clubs in recent years. Earlier this month, QF hosted four leading NBA stars - Carmelo Anthony, Klay Thompson, Luke Walton and Tracy McGrady - during their visit to Qatar, reinforcing the nationwide commitment to encourage young people in sports. Qatar Universities Basketball Cup 2018 further encapsulates a national aspiration of youth development that is built on the global outreach potential of community sporting events.