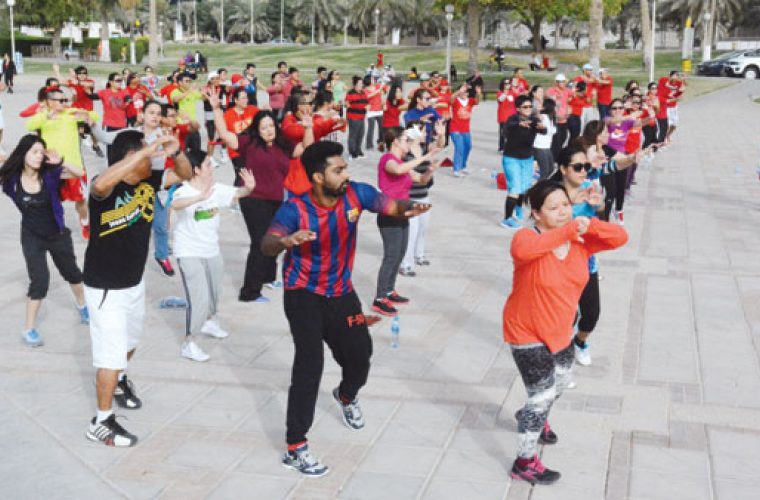 Hundreds of people are benefiting from a two-hour physical fitness session held on Doha’s Corniche near the Sheraton Park every Friday morning.
The weekly workout organised by Filipino Fitness and Health in Qatar (FFHQ) has been conducted for nearly two years now, having been launched on April 25, 2013.
Americans, Pakistanis, Indians, Sri Lankans, Indonesians, Palestinians, Egyptians and Filipinos are among the growing number of participants in the session featuring Zumba, Tae Bo, pop dance and other aerobic exercises.
“Many of our participants are regulars and they reach the venue well before we start at 5.30am,” Randy Frogosa, FFHQ adviser, told Gulf Times yesterday.
“We encourage our compatriots and other residents to take time to exercise with us after a busy week,” he explained.
The group now has nearly 1,500 members on its Facebook page and an average of 200 people participating every Friday. During its recent anniversary celebration, about 700 members attended the fitness sessions on the Corniche.
FFHQ is one of the legacies of former ambassador Crescente Relacion who left Qatar last month after finishing his tour of duty. He regularly attended the activity, along with former culture attache Richard Billedo and other Philippine embassy officials.
Members and officials of the group welcomed the new Philippine culture attache, John Danilo G Jiao Jr, at the session yesterday. His previous posting was in San Francisco, US, as liaison and political officer for six years. Jiao, who loves to play football, hopes to attend the activity regularly.
“We are thankful to the Qatari authorities for issuing us the permit to conduct the exercise sessions,” Frogosa said.
The group’s officers include chairman Jonathan Bacanto, secretary Rose Ramos Pastrana and lead instructor Marvin Dumaguin Abaredes. It has licensed Zumba instructors and Zumba international network members as volunteers.
FFHQ also organised a Zumba programme to help distressed overseas Filipino workers staying at the Philippine Overseas Labour Office in Doha. The funds raised were used to buy air tickets for them.
The group plans to hold sessions in other places such as Aspire Zone to reach more enthusiasts.

People from various communities take part in the weekly workout.