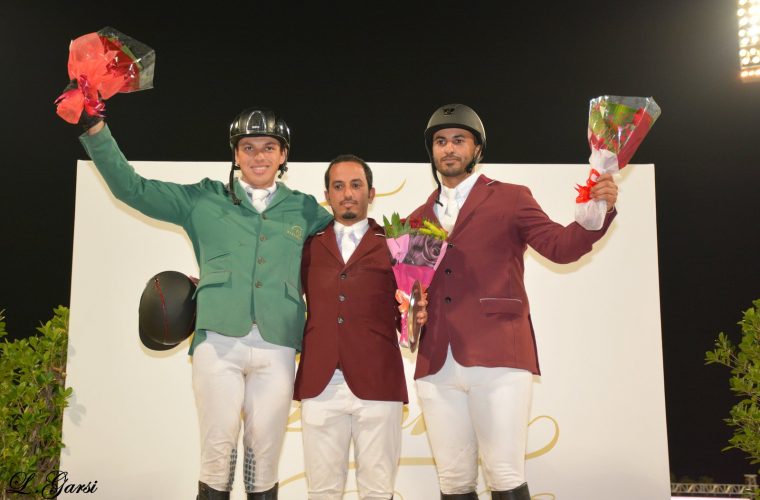 DOHA: It was double delight for Qatari rider Faleh Suwead Al Ajami who yesterday guided Armstrong Van De Kapel to victory in QNB Doha Tour title win at the Main Arena of the Qatar Equestrian Federation (QEF).The victory in the feature competition of the day sealed Armstrong Van De Kapel’s ticket to Rio Olympic Games where the Qatar squad will feature in the equestrian competition.Armstrong Van De Kapel yesterday clocked a time of 39.08 seconds in the jump-off to seal the win worth QR115,075.Saudi Arabia’s Abdullah Alsharbatly, astride Littel Pezi, retired just seconds into the jump-off to hand over the win to Al Ajami who savoured a flawless routine with Armstrong Van De KapelAlsharbatly picked up QR92,060 for his second-place finish. Home rider Ali Youseff Al Rumaihi, a member of the Olympic Games squad for Qatar, finished third with Gunder. Al Rumaihi won QR69,045.Saudi Arabia’s Khaled Abdulaziz Al Eid (Old Chap Time, QR32,221) and Qatar’s Bassem Hassan Mohammed (Cliff Z, QR25,316) completed the top five. “For sure I am so pleased that I have won on home soil, in front of my fans.” Al Ajami said.“I did not expect to win because there are good riders in this competition,” Al Ajami said. Ramzy Hamad, Alsharbatly and Khaled Al Eid are all good riders,” the Qatari said.“This is a new horse. We bought it recently in 2016. And he will be going to Rio with me,” Al Ajami said. “Now I will get ready for the third leg of the QNB Doha Tour,” he said.“Olympics is a big target for us. It won’t be easy and I hope we can do it (win the gold),” he said.In the team competition, Al Udeid Blue sailed to win in the round against the clock as the trio of Saed Saad, Tina Lund and Salman Mohammed Al Emadi picked up the top prize of QR89,088.Al Udeid Blue clocked a combined time of 222.99 seconds with just 4 faults. Lusail Team comprising of Ramzy Haamd Al Duhami, Hamad Al Attiyah and Mohammed Osama El Borai finished in second spot that was worth QR70,656. Lusail Team clocked a time of 240.45 seconds.Al Shaqab Team grabbed the third spot in the five-side competition.Kamala Abdullah Bahamdan, Ibrahim Hani Bisharat and Khaled Abdulrehman Almobty produced a comined time of 221.41 seconds. The third prize was worth QR55,296.Doha, Katara and Al Rayyan teams were placed fourth, fifth and sixth respectively.The fourth place was worth QR38,400 (238.79 seconds, 17 faults), while the fifth-best team picked up QR29,184 (235.38 seconds, 19 faults) for their efforts.Al Rayyan won QR24,576 (243.12 seconds, 22 faults).Earlier in competition 9, in-form Kuwaiti rider Ali Al Khoraifi guided Cheril to a convincing win in the 145cm class.Cheril clocked a time of 34.21 seconds as Al Khorafi - who rides under the flag of FEI - picked up the top prize of QR17,500.Qatar’s Rashid Al Towaim Al Marri sealed the second place when his ride Kannada clocked a time of 36.27. Al Marri won QR14,000. Qatar’s Awad Al Qahtani, astride Santos, bagged the third spot. Santos clocked a time of 38.43 seconds in the jump-off class as Al Qahtani won QR10,500. Saudi duo of Nasser Albagami and Bader Mohammed Alfard completed the top five.Albagami, astride WKD Lexington (34.46 seconds), won QR7,000. Cover Girl G, ridden by Alfrad, clocked 34.86 seconds to finish in fifth spot. Alfard won QR4,900.In competition, Kuwaiti rider Al Khoraifi produced a dazzling run with Ungarin 4 to win the 125cm class on what was the final day’s action in the second leg of the three-event QNB Doha Tour. Ungarin 4 clocked a time of 24.19 seconds as Al Khoraifi won QR12,500.Saudi rider Saad Alajami guided Wait N See to second spot. Wait N See clocked 25.86 seconds as Alajami won QR10,000. Alajami’s compatriot Abdullah Alrajhi managed a flawless ride with H Zoe to claim the third spot. H Zoe clocked a time of 26.15 as Alrajhi won QR7,500. Saudi Arabia’s Meshary Alhumaidi Alharbi (T Vivaldi, 26.36) finished fourth while Norway’s Morten Alexander Djupvik (Wisecrack, 26.50) ended in fifth spot. Alharbi won QR5,000 while Djupvik got richer by QR3,500.The third leg of the QNB Doha Tour will be held from March 24 to 26 at Katara.