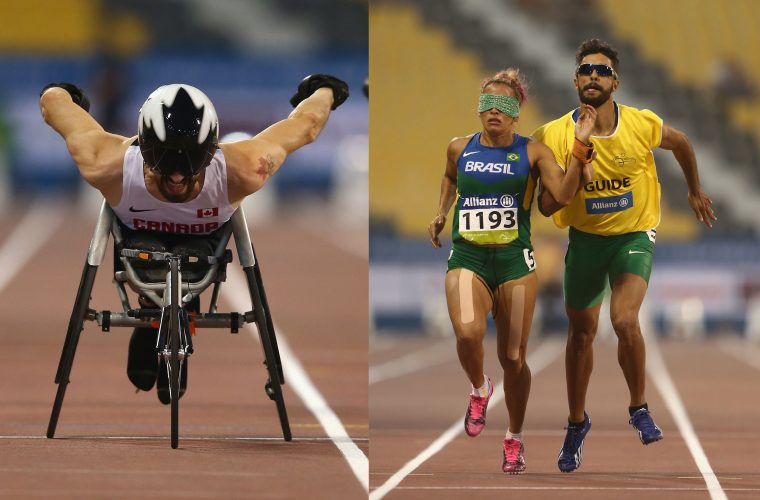 The IPC Athletics World Championships are currently being held in Doha until 31 October. The world’s largest para-sport World Championships will see 1,300 athletes from 100 countries battling to be best in the world and qualify for next year’s Rio 2016 Paralympic Games. Paralympic Champions, reigning World Champions and world-record holders will inspire and amaze spectators from around the world as they showcase their incredible abilities in a bid to claim ultimate glory on the world stage.

Tickets are on sale now for the event at at https://doha2015.q-tickets.com or at the QOC booths in Villaggio, City Centre and Landmark Malls.

One such athlete is the reigning 100m T42 World Champion and Paralympic silver medallist, Scott Reardon of Australia. Reardon, who lost his leg in a tractor accident when he was 12, is also a former water-skiing World Champion. He will be hoping defend his World Championship title when he competes on 25th October. We had a chance to catch up with him before he left for Doha.

1.How are your preparations going for this year’s World Championships? Is there anything particular that you are working on in training?

Preparations, have been going really well up to this point, it’s been a relatively event free lead up, with only a few minor issues that we have had to deal with which is fantastic. When it comes to any preparation, time off training is hard to recover from, so it has been nice to have been training consistently for so long.

There is not much we are working at the moment, once we get to this stage of our preparation there is not a lot that you can do to improve, the work has already been done. But this season, we worked on my start, refining it so that it will help me get to my top speed earlier, therefore ill run faster.

2.What are you looking forward to most about competing in this year’s World Championships?

Just being back at an international competition again is exciting, it has been a long time since we have had the chance to race our competitors, I really look forward to running the 100m, it’s my better event and I think that I am in really good shape to run fast.

3.Why are the World Championships so important to you and your sport?

As para-athletes, over the years, we really don’t get a lot of opportunity to race each other on a consistent basis, there have been some really positive steps in the right direction with the introduction of the Grand prix circuit, but that is still in its development phase. World Championships give the athletes the chance to reach the next level of their sport with really good, fast, competitive racing. The sport as a whole is gaining momentum world-wide so these championships will really start to get people excited for next year’s Paralympic Games in Rio

4.For anyone that has never seen para-sport, what makes it so incredible?

It’s different. If you sit down and watch a session of races, there may be five 100m races, and you won’t see the same thing twice, you literally can watch people with total blindness to amputees or cerebral palsy. One thing that that you get in para sport is a group of people who had a choice to give up in life, but chose to live life to the fullest and not use their disabilities as an excuse, but rather a challenge to push them to be the best.

5.How did you get into para-athletics and how did it change your life?

That is a long story. But long story short, I was watching the Beijing Paralympic Games in 2008, and I thought that if I was running I could win. I was very naive but it is where it all began. It hasn’t changed my life, it has become my life! I never thought that when I started to run again It would take over my life, some of the biggest highs of my life have come from my sport, not many people are fortunate enough to have the opportunity to train every day, represent their country and travel the world winning medals for Australia.

6.Who was your hero or role model growing up and what impact did they have on you?

My brother was my biggest hero/ role model growing up. He is a few years older than me and the way that he approached anything that he had interest in, he was always so committed to doing it to his absolute best. Seeing the way he would train and how hard he pushed himself to improve his skills was something to aspire to. I think this has stuck with me no matter the sport that I have been a part of.

7.What do you hope your legacy will be when you retire from athletics?

That’s something that I have never thought of. I would love that when people look back at my event in years to come, people will be able to say that the T42 class is where it is because of people like me, to take the class to the next level before everyone else and give everyone hope that they can go faster. Also with good coaching and a professional attitude, the guys who aren’t as naturally gifted or talented are still able to compete, as I am proof of this.

8.How did you first get into water skiing? Was this before your injury?

I have waterskied for as long as I remember, but I was a recreational skier, and didn’t even know that tournament waterskiing even existed. It wasn’t until after my accident that I found out it was a real thing. Through some family connections I met up with the world champion for leg amputee skiers, he gave me some tips and invited me to my first competition, and from there I have never looked back

9.If you had to choose between competing in running and water skiing which would you choose and why?

I guess I already have had to do this in the past, and athletics won then. The reason I chose athletics in 2008 was that I had done almost everything in skiing and I was looking for something bigger, something to pursue new goals in.

When I eventually achieve what I want to in athletics, if I had to make the choice then, it would be a hard choice. Waterskiing was so enjoyable and externally challenging, and there are still a few things that I could achieve there. But in the end I think I am runner, I always have been, I love going fast under my own power, I think the biggest thing that attracts me to track is the history and the pureness of it. You have to train with what you are born with. You find little ways to extract the most out of your body, to go as fast as you can, I love that.

10.If you could give a message to any disabled children wanting to compete in sport, what would it be?

Have fun, I think that is the best piece of advice that I was given, when I started sport again. And it is the best thing I can pass on.

But I tell kids all the time, if you want to do it, find the right people to help you on your path, not everyone will be a Paralympian, but if you work hard enough and commit yourself, the Paralympics may be possible. And if you do get there, you’ll never forget it and you will always want more, because it is something truly amazing.

You can keep up to date on the World Championships on the IPC Athletics social media channels: