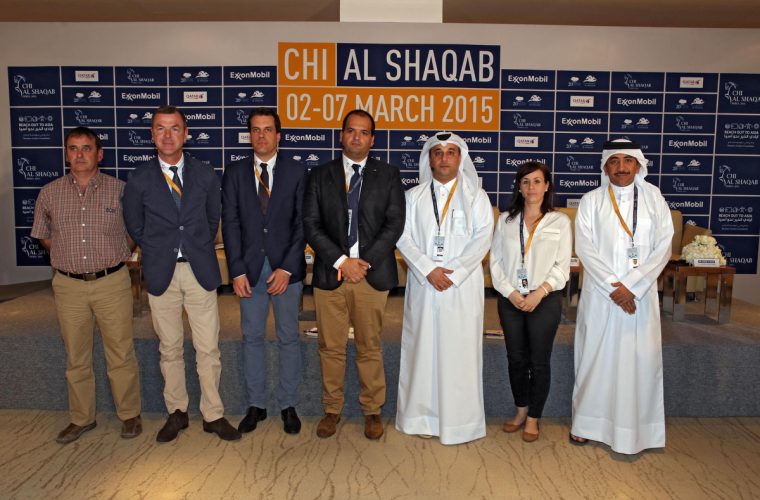 CHI AL SHAQAB 2015 would like to welcome media and all the participants to the third edition of this prestigious equestrian competition held in the amazing facilities of AL SHAQAB Equestrian Centre. The organisers express their confidence in staging a successful and exciting event which will attract a lot of attention worldwide.

At the same time CHI AL SHAQAB 2015 will be a fun family event with a lot of activities not only for the dedicated equestrian aficionados but for the whole families who will be coming along to experience the art of horsemanship. This time there will be a bigger participation of Arab teams and the teams from the Gulf States.

On hosting CHI AL SHAQAB and bigger participation from riders and media:

“This is the third time we are hosting CHI AL SHAQAB. This time we are expecting bigger participation from both riders and the media. There will be around 250 participants from 33 countries with a large participation of Arab teams at CHI AL SHAQAB 2015 and teams from the Gulf States in particular. Media presence is the biggest ever too.The previous competitions were a spectacular success and we are making sure this year’s event will be even better”.

On improving the overall level of CHI AL SHAQAB 2015:

“We are not resting on our laurels trying to achieve even higher standards of organization at CHI AL SHAQAB 2015. We are concentrating our efforts on improving the overall level of the event in every possible aspect yet we are planning the whole array of activities surrounding the competition. We want the participants to feel very comfortable at CHI AL SHAQAB which will help them to do their best during the competition.

“We want the spectators to enjoy fully everything this competition has to offer. We want to create a complete family friendly environment where whole families will come and enjoy their time. During CHI AL SHAQAB 2015 the very entertaining fan zone will be created at the event reflecting Qatar’s uniqueness and rich cultural heritage”.

“The overall value of CHI AL SHAQAB 2015 will go far beyond that of just a sporting event. The inclusion of para-dressage in the CHI AL SHAQAB 2015 competition programme for the first time in the Middle East and the whole of Asia serves as a message of social inclusion and equal opportunity”.

“I am very happy to welcome the equestrian world, its best representatives who will be participating at AL SHAQAB 2015 as well as the members of local, regional and international media who will be covering this amazing event, and I would like to share a part of Qatar’s hospitality and our horsemanship traditions with the rest of the world”.

“There are more than 500 journalists and media representatives accredited at CHI AL SHAQAB 2015. Work of the Qatari media is as important to us as that of the international media working at the event, It is extremely important to facilitate the work of the journalists covering the events and the competitions at CHI AL SHAQAB 2015.”
“We would like to make sure that the coverage of CHI AL SHAQAB 2015 will be the best ever and the members of the press, TV, Radio, online and everybody who will be covering the competition and everything related will get all the support and facilities they need”.

“CHI AL SHAQAB 2015 offers an incredible opportunity to all kinds of media be it written press, online, Radio or TV. We have got a state-of-the-art media centre with all working facilities, work stations, catering area and media tribune”.
“We expect media to enjoy our modern facilities and use them to their full potential providing a thorough coverage of every aspect of CHI AL SHAQAB 2015”.

“It is fantastic that this year vaulting is featuring here at CHI AL SHAQAB for the second time running. Vaulting is so much different from any other disciplines. We can call it a theatrical discipline in which the athletes perform different artistic exercises, including mounts and dismounts, backflips, handstands, somersaults on the back of the cantering horse. All this is being performed to the unique harmonic musical accompaniment. Hope this discipline will be very popular among the spectators”.

On the uniqueness of vaulting and prize money:

“This CVI (Competition Voltige International) is very special for the entire vaulting community. Everyone is extremely proud to be a part of this historical, unique vaulting event in this region. Vaulters are competing for a total of 60.000 Euros, which is still the all-time highest prize money in this discipline”.

On the AL SHAQAB facilities:

“Vaulters are very pleased to compete at CHI AL SHAQAB, at this marvellous competition, at this breathtaking facility. Due to the fantastic hospitality, those who had the opportunity to be here last year, they still talk about it as one of their best equestrian experience ever. “

Dr ULF MOLLER, Dressage Discipline Manager introduced some of the participants in his discipline, praised the rising level of interest towards CHI AL SHAQAB and explained some certain moments regarding dressage.

On the participants in his discipline:

“I have only been once in Doha before. Now it will be very exciting to actually see the competition. We have a very promising group of competitors with no less than seven Olympic riders. The most prominent of them is, of course, Carl Hester – a member of the gold winning British team at the London 2012 Olympic Games”.

On the attention and level of interest CHI AL SHAQAB is drawing:

“Despite a very full dressage calendar in Europe and the US at this time of the season, we have Doha getting a lot of attention and the level of interest is certainly to rise in the years to come”.

On dressage: “Unlike the jumping riders most dressage riders have only one horse for top competitions and they take care to manage it wisely”.

“Qatar hospitality and the prize money are extraordinary, very worthy for a 5* dressage competition and we should expect some extremely good performances”.

Mr ALEXANDER DURBAN Para-Dressage Discipline Manager emphasised on the fact that para-dressage is the newest addition to CHI AL SHAQAB’s programme and the debut of this discipline at CHI AL SHAQAB in the whole of the Middle East and Asia.

On the excitement of para-dressage debuting at CHI AL SHAQAB 2015:

“I am quite excited to be here. Not only because I have never been to Doha before but because para equestrian dressage will premiere at CHI AL SHAQAB 2015. It is the first time we are having a para-dressage competition in this part of the world and the field of competitor’s is outstanding. You won’t see any better outside of any official championships”.

“We will see 21 riders from 11 countries, with Lee Pearson from Great Britain as the rider with the most medals from Olympic Games and world championships. The Netherlands are sending seven riders”.

“Our hosts and the organisers at AL SHABAB have left no stone unturned to prepare for these riders and their special needs. Everything is ready and we are looking forward to experiencing another milestone in the development of this sport which has become a part of the Paralympic programme since 1996.”

On the importance of CHI AL SHAQAB:

“CHI AL SHAQAB is considered as one of the most important equestrian events in the world with the participation of top level riders and horses. The impressive state of the art venue of AL SHAQAB contains the first class surface as well as facilities for both riders and horses.

On the prize money, course design, emotions and competitiveness at CHI AL SHAQAB 2015:

“With 9 out of 12 competitions counting for the FEI ranking and a Grand Prix worth 500 000 euro, emotions, risk and competitiveness are 100% guaranteed. A well known course designer, Frank Rothenberger, will be taking care of the designs so we will see the demanding, smooth and well designed courses with horses welfare in mind”.

On Qatari generosity and hospitality:

“The generosity and hospitality of the Qatari people will be shared with all of us together with their passion for horses”. Mr CHRISTIAN LOZANO, Endurance Discipline Technical Advisor, who has also been a president of the organising committee for The World Endurance Championship for Young Riders. Mr Lozano has also been involved with organisation of the endurance competitions in his native France.

On gratitude to organisers and excitement at CHI AL SHAQAB: “I would take this opportunity to thank the organising committee for all their efforts in ensuring the strength of the competition. We are all looking forward to the excitement here at AL SHAQAB.”