We are watching you billboards explained - Mystery Solved? 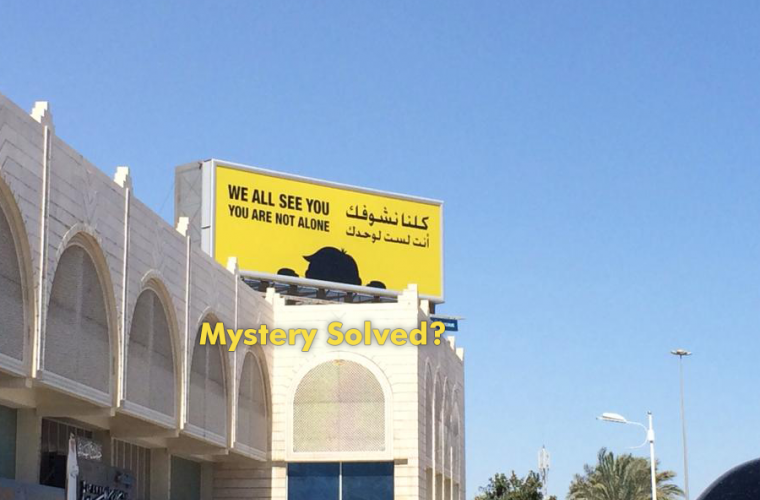 Seen those posters and billboards around Qatar that say "We all see you, you are not alone" and wondered what it was about? Well many people wondered too.

We received tweets asking us if we knew what it was all about. From our point of view, it was quite a creepy message; Orwellian Big Brother style. So we asked online to see what people thought it could be about. Here are a few tweets:

@iloveqatar It may back fire in the advertiser, many people say it’s creepy

On Facebook, people were equally confused, due to the choice of colors and success of another awareness campaign, some people thought that it was related to OneSecondQatar.

Abdulla Bin Hamad said, "I thought it's an ad for those suffering from depression or child abuse".

Most users though, thought that this was related to public monitoring and CCTV cameras being installed around the country. With all the news coming out about the NSA and other international organizations monitoring people's every move, some would say that it's a reasonable conclusion.

There was light at the end of the road though as @TeamPistonBroke tweeted this link to us. (So did @boby_BiQ who shared an original tweet by @vanish_forever). It's a Qatar Tribune article that mentions that Qatar Gas and the Municipal Affairs and Urban planning signed a three year agreement to 'address negative practices that affect the beauty and cleanliness of streets and public places in the country.' It goes on to mention that 'The campaign will focus on changing negative practices such as littering, spitting in the streets and public spaces, hanging laundry on balconies, throwing garden waste in public places, and overflowing sewage'.

It should be mentioned that this article was published in 2013 however close to the end it says "The campaign will have a specially-designed character to promote is messages and slogans such as "For a Cleaner Nation' and 'We Are All Watching You, You are Not Alone.'" The text is identical in both English and Arabic to what we see on the billboards.

So does that close the chapter? We've tweeted to @QatarGasPR asking them to confirm and we're waiting to hear back.

Keeping Qatar clean and discouraging actions such as spitting, is a great thing and definately worthy of support, there's no question there. There are a couple of issues though; 1) If it truly is a campaign about Cleanliness, then it seems that the billboards were quite a waste of money since the message didn't get through to anyone; and 2) Did this scare people more than help encourage a positive change in society?

Either way, we have to admit one thing, it did get people to think.

Over to you all! What did you think it was for?