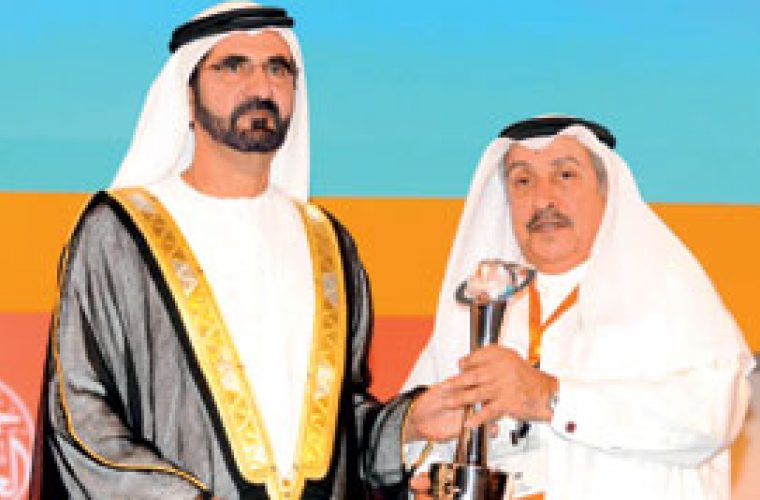 Veteran Qatari journalist and secretary general of the Gulf Press Association, Nasser Mohamed al-Othman has been presented with the Arab Media Personality Award for 2010 by the UAE Vice-President and Prime Minister and Ruler of Dubai Sheikh Mohamed bin Rashid al-Maktoum. Soon after receiving the citation of $50,000, al-Othman announced that this was an award to “those who died in the cause of journalism and media during the recent Arab Spring uprisings, foremost among whom is Ali Hassan Jaber, the Al-Jazeera cameraman who was killed in an ambush in Libya last month.” “This award is an award for all Qatari journalists and I am only a humble representative,” said al-Othman at the ceremony. “I feel greatly honoured by this recognition for my services to journalism over half a century. My professional goal has always been to give my best and satisfy the reader. I would also describe it as a recognition for honest work in the field of journalism. I’m sure this will serve as an inspiration for other journalists.” The felicitation was made at the 10th edition of the Arab Journalism Awards, organised by the Dubai Press Club at a ceremony held at the city’s Grand Hyatt hotel last week. It was through al-Othman’s efforts that the Gulf Printing and Publishing Company (GPPC), parent company of the Gulf Times and Arrayah newspapers, was established in 1978 with financial investment by a group of leading Qatari entrepreneurs. He now serves GPPC in an advisory capacity. The English language daily Gulf Times was launched in December 1978, followed by the Arabic daily Arrayah a few months later. In recognition of his role in promoting Arrayah in the Arabian Gulf al-Othman was the first Qatari journalist to visit the Soviet Union on an invitation from the Soviet press agency Novosti in 1985. Al-Othman was also instrumental in developing the Arab and the Gulf media and in the formation of the Gulf Press Association. The pioneering media man is also credited with establishing the first radio station in Qatar in 1965, which started as a weekly broadcast service for Fridays and other religious occasions. It was known as the ‘Grand Mosque Radio.’ In 1970, he supervised the first international book exhibition in Doha. In 1973, he was appointed a member of the founding committee of the Qatar National Museum. Al-Othman also represented the country in the Arab Historians Federation from 1975-81. After graduating from the International College affiliated to the American University in Beirut, Lebanon, Nasser al-Othman joined the Education Ministry in Qatar in 1962, wherein he served under various positions, and organised the publication of the magazine Education in 1970. In 1976, he moved to the Ministry of Information and established the Department of Culture and Arts which played a major role in developing cultural activities in the country, including drama, fine arts and folklore. As chief editor, he was in charge of publishing Arrayah newspaper from 1979. Among the journalists who formed part of the pioneering editorial team of the newspaper were the late Raja al-Naqqash, the late Salahuddin Hafez and Kamil Zuhairy. He left Arrayah in 1986, and became the editor of Al-Sharq, a new Arabic daily in 1989. The Ministry of Information ordered a publication ban on Al-Sharq twice, once during the invasion of Kuwait by Iraq and the second for “maligning a sister country.” From 1998, he resumed his post as chief editor of Arrayah, and later resigned to assume an advisory role for the newspaper. In 2000, he was elected as the general rapporteur for the annual meetings of the chief editors of the GCC dailies. This later became the Gulf Press Association, headquartered in Bahrain, and al-Othman was elected as its Secretary-General in 2005, and he was re-elected to the position in 2009. Al-Othman is the author of With Their Bare Hands, an account of the first oil rig workers in Qatar and numerous newspaper columns on Qatari heritage. Nasser al-Othman is also the recipient of the Tiriayyim Omran Press Award of UAE in 2006, and Media Excellence Award from Jordan in 2007. Among others felicitated at the ceremony was the editor of the Arabic daily, Al-Riyadh of Saudi Arabia, Turki al-Sudairy for his daily column ‘Meet’ which continues to command high readership in the region. He is also the chairman of the board of directors of Saudi Journalists Association and president of the Gulf Press Union. He was presented with the ‘Best Newspaper Column’ award. Posthumous awards were given to Al Jazeera cameraman Ali Hassan Jaber, Mahmoud Ahmed Mahmood of the Egyptian daily Al-Ahram, who died in February this year after being hit by a sniper bullet in the Cairo protests and Sabah al-Bazi of Al-Arabiya channel, who died in Baghdad in an ambush attack in March.
asser Mohamed al-Othman receiving the Arab Media Personality Award for 2010 from the UAE Vice-President and Prime Minister and Ruler of Dubai Sheikh Mohamed bin Rashid al-Maktoum