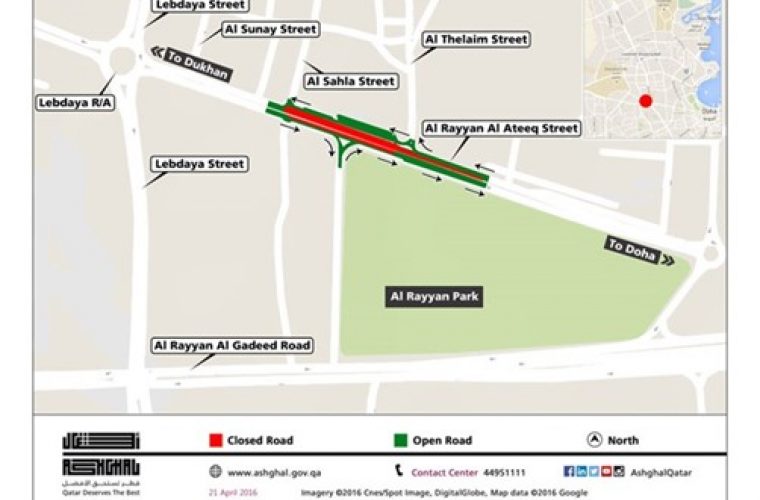 The Public Works Authority (Ashghal) has announced that it will implement a two-month closure on a part of Al Rayyan Al Ateeq Street, in front of Al Rayyan Park, from tomorrow.
The closure will extend for 200m in the Doha-Dukhan direction (westbound) of the road and on one lane in the opposite direction (see map).

It would be implemented in co-ordination with the Traffic Department, Ashghal said in a communique.
During this period, traffic on the closed portion of Al Rayyan Street heading towards Dukhan will be diverted to the existing service road, while one lane will remain open to traffic in the opposite direction.
The speed limit will be temporarily reduced to 30km/h and speed humps will be set up for the safety of road users.
The closure is required to facilitate micro-tunnelling works as part of the Dukhan Highway East project in order to complete work on the stormwater system in the area.
The Dukhan Highway East project involves the construction of an 11km road with four lanes in each direction and upgrade of service roads, including seven multi-level interchanges, and landscaping.
Ashghal will instal road signs advising motorists of the closure. It has requested road users to abide by the speed limit and follow the signs to ensure their safety. (Source)