Stress on safety and security of workers 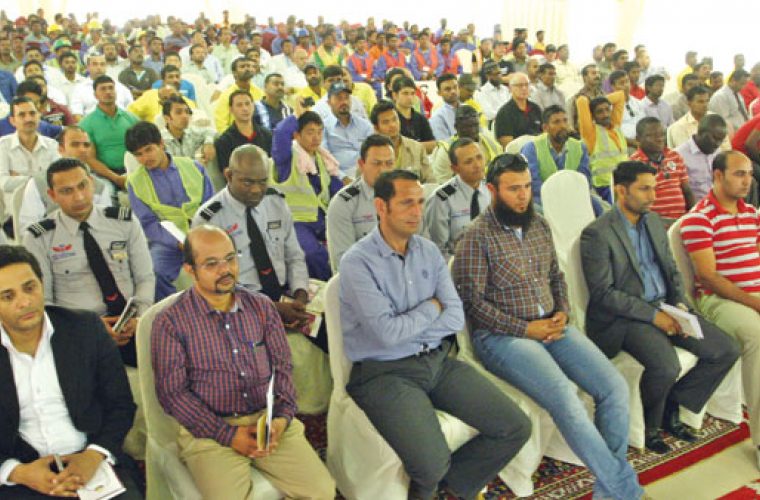 The Labour Inspection Department (LID) of the Ministry of Labour (MoL) has considerably increased the number of inspectors and fresh recruitments are being made constantly, LID director Khalid al-Ghanim has said.

The department conducts regular and sudden inspection visits to various worksites around the country to ensure the safety and security of workers, he said yesterday, pointing out that Qatar has active co-operation with a number of international and regional bodies in terms of labour regulations, including the International Labour Organisation (ILO), with the primary aim of promoting the rights of its workforce.

“Our inspectors get adequate and necessary training before they actually carry out their duties, whether in legal terms or administrative and logistical tasks. Recently, a team was trained in Turin, Italy, at the ILO while another team was trained by Singaporeans. The aim is to equip them with the best qualifications so that they can better enforce the law and ensure effective protection of work and human rights,” he stressed.

Al-Ghanim was speaking on the sidelines of a function organised by the MoL for workers to mark the World Day for Health and Safety in the Doha Industrial Area yesterday.

He said all LID inspectors are Qatari nationals and have judicial powers to enforce the law at worksites.

Explaining that penalties are imposed gradually, he said: “In case of small and non-serious violations, companies are first given directions and advice to fix things, then warnings and ultimately issued a violation report, which rarely happens because most companies comply.”

He stressed that in case of clear and imminent danger or risks to the safety and security of workers at any worksite, inspectors have the power to close it down immediately to protect workers.

Mohamed Ali al-Meer, assistant LID director, said the main aim of yesterday’s function was to promote both workers’ and companies’ awareness on the importance of abiding by all health and safety regulations while at work - whether for skilled or unskilled workers.

“We have participation from the Ministry of Interior, including the Civil Defence and Traffic Department, Supreme Council of Health and Hamad Medical Corporation (HMC), besides the representatives of different communities. Presentations are made during the day on the issue, in addition to the distribution of various brochures on safety and how to approach the MoL for complaints and assistance,” said al-Meer.

Meanwhile, al-Ghanim affirmed that most companies comply with work regulations in Qatar as LID inspectors are strict in enforcing the law in case of any violations related to workers’ safety and rights.

He said they conduct regular visits to labourers’ accommodation units to take stock of the situation and hear what workers have to say.

He said there will be a march by workers next Friday afternoon near Souq al-Attiyah in the Industrial Area to launch the celebrations of World Day for Health and Safety in Qatar with the participation of some stakeholders and senior officials.

The events will last for a week and conclude on May 9 at the Medical Commission, to be held from 8am to 6pm.

Free medical checkups will be conducted for labourers, who will be given free medication if necessary, besides other awareness activities such as lectures in different languages. All participating workers will be given gifts and free meals at the concluding function.

Dr Rafael J Consunji, director of the Injury Prevention Programme at HMC, said there is a project to establish a comprehensive database of work-related injuries in Qatar in collaboration with all stakeholders.

“We need to compile adequate information about each injury, such as what exactly happened at the worksite, why it happened, what were the procedures taken for prevention and treatment and similar issues. Clear data can give us a clear picture of what we should do to improve safety and avoid injury at worksites,” he explained.

Dr Consunji said it may be assumed that the number of work-related injuries have increased, but this is not true as the number of new workers who come to the country is continuously increasing. Yet, he said, the ratio is relatively stable. He pointed out that the ratio (49.3 injuries per 100,000 workers) is lower than that of injuries among expatriate workers in the US, UK and UAE.

A large number of company workers of different categories attended the function and each was given a gift and free meal at the conclusion of the function. Further, LID honoured the representatives of expatriate communities, such as Indian and Pakistani, for their positive co-operation with the MoL.