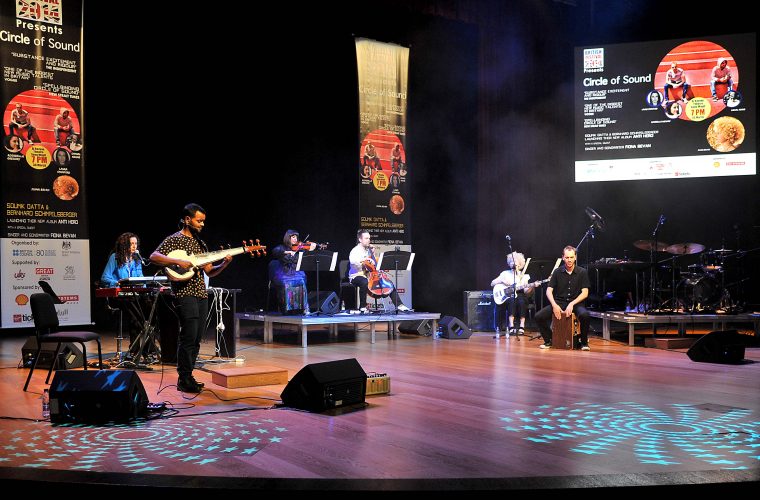 ‘Circle of Sound is the story of two people finding a sound together and finding a language together’… Bernard Schimpelsberger.

Geometrically, the basis for many patterns in Islamic Art and the finesse of Arabic Calligraphy is the circle. Perhaps the circle is the foundation for creating consistency within an art form that, subtly pulling the artistic strings, impacts its overall beauty and awe. What if this same concept could be applied to music?

Winner of Songlines Magazine’s ‘Top of the World’ Award, Circle of Sound is a powerful collaboration between two very different music genres. As East met West, Soumik’s talents amazed the audience as the classical Indian string blended exotically with Bernard’s hybrid drum rhythms and even beat-boxing and bol (recreating tabla beats vocally) to create an avant-garde, multisensory performance. The band, who have previously collaborated with Beyoncé, Akram Khan and Bill Bailey were joined by the brilliant singer-songwriter Fiona Bevan (who co-wrote the hit song ‘Little Things’ by One Direction) as well as a violinist, cellist and pianist layering their sweet harmonies and dramatic crescendos into the music.

Daring to blend two vastly different musical genres and cultures, historical and contemporary, Circle of Sound proved that through collaboration - anything is possible.
Doha, itself being a home to a wonderful fusion of cultures seemed the perfect setting for the band.
“That philosophy of moving in circles, the rhythmic cycles, the melodic cycles, everything comes back to one – comes back home’… Soumik.

To have a look at the up-coming British Festival 2014 please visit the British Council website.

BC
Start a discussion
Relevant Articles