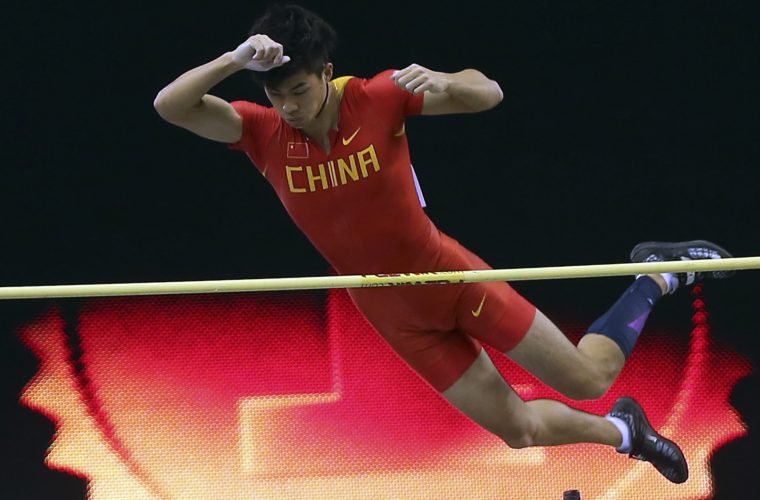 DOHA - Another Asian record and six competition records fell on the second day of the 7th Asian Indoor Championships in Doha, Qatar, but it was local star Mohamed Al-Garni’s successful 1500m title defence that commanded the Aspire Dome spotlight.

The 23-year-old exuded overwhelming confidence as he broke from a four-man pack 100 metres from the finish, pounding his chest and motioning to the crowd as he breezed down the homestraight. It was an early celebration that likely added some two seconds to his final time and kept him just 0.07 seconds shy of the Asian record.

He nonetheless clocked a 3:36.35 competition record, the third fastest performance in the world this season.

“I could have run faster but I was overwhelmed by the crowd’s support and I wasted time celebrating in the final straight,” Al-Garni said. “It’s such a fantastic feeling to win at home.”

Al-Garni added that he isn’t certain about whether he’ll compete at next month’s world championships, choosing to focus instead on sharpening his tactics as the Olympic Games approach.

Adekoya and Haroun dominate over 400 metres

As expected, Oluwakemi Adekoya dominated the women’s 400 metres as the 23-year-old Bahraini notched her second Asian record in as many days.

Running in lane five, Adekoya made up the stagger on her chief rival Elina Mikhina to her outside just 100 metres into the race and forged on to win by more than two seconds. her 51.67 performance knocked another 0.01 from the continental record she set in qualifying yesterday.

Adekoya confirmed that she’ll be competing at the world indoor championships but that outdoors her focus would remain on the 400 metres hurdles.

The men’s contest went according to the playbook with local ace Abdelalelah Haroun taking an impressive victory in 45.88, another championships mark.

“I gave all I had left in the tank, but I certainly can go faster,” said Haroun, whose performance was the sixth fastest of the season. “My target here was to win the race, nothing more. Next stop for me is Portland.”

Abubaker Abbas of Bahrain took silver in 46.60, with Mikhail Litvin of Kazakhstan (46.80) third.

Betlhem Desalegn became the championships' first double winner after her resounding triumph in the 3000 metres.

The 24-year-old broke from Ruth Jebet of Bahrain and her United Arab Emirates teammate Alia Mohamed Saeed with 80 metres remaining en route to her 8:44.59 run, the fourth fastest time of the year.

“I needed to push hard, to meet the qualification standard for Portland," said Desalegn, who's been hobbled by achilles-related injuries over the past three seasons. "I am still not one hundred percent fit, but I will fight for a medal at the Worlds after finishing sixth (at the 2014 World Indoor Championships in) Sopot."

Following Li Ling's lead from the opening night, Huang Bokai secured another pole vault title for China –and for their French coach Damien Inocencio-- with a 5.75m championships record, yet another career best for the 19-year-old. Bokai secured the win after topping 5.70m on his second attempt before sailing clear at 5.75m with his first. He later bowed out with three tries at a would-be 5.82m national record.

Likewise, both triple jump titles were claimed for Kazakhstan.

In the women’s event, Olympic champion Olga Rypakova of Kazakhstan took gold as expected but with a modest 14.32m winning leap.

“The Asian Championships was a just a break from my Olympics preparation, that’s why I wasn’t in a very good shape,” said Rypakova, who confirmed that she’ll be back in Doha for May’s IAAF Diamond League kick-off.

Johny Mayookha of India, the winner of the long jump, finished second with a 14.00m leap.

Roman Valiyev took top honours on the men’s side at 16.69m, comfortably ahead of India’s Renjith Maheswary (16.16m).

Elsewhere, Hu Yufei of China leads the men’s heptathlon after day one with 3226 points. Mohmmaed Jasem Alqaree of Saudi Arabia is second with 3193, ahead of Japan’s Takumi Otobe, who tallied 3072.

A protest filed by Iranian officials, against India's Swapna Barman for a lane infringement in the 800m, was upheld. Barman initially finished second behind Voronina.