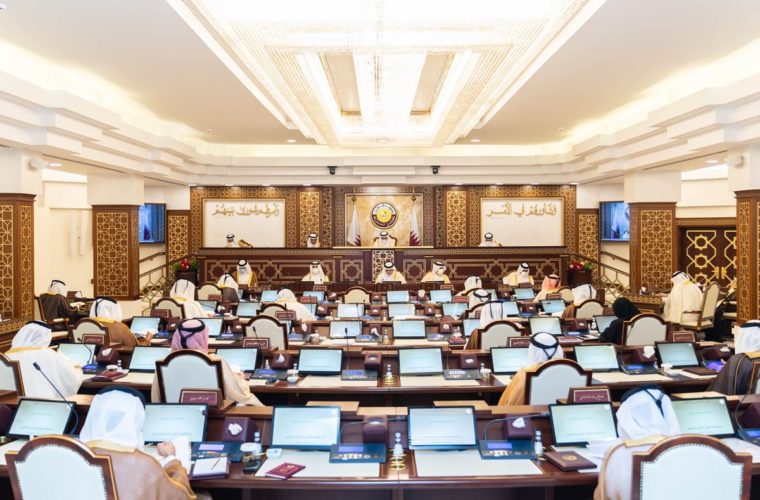 At the outset of the session, the Shura Council welcomed the outcome of the 41st session of the Supreme Council of the Cooperation Council for the Arab States of the Gulf (GCC), which was held in the Al-Ula Governorate in the sisterly Kingdom of Saudi Arabia.

The Shura Council expressed its deep pride in the wise policy of H.H. the Amir Sheikh Tamim bin Hamad Al-Thani, which contributed to the success achieved by the GCC Supreme Council meeting and its important positive results to consolidate the unity of the GCC ranks, develop the GCC joint action, revive and activate the GCC and spread the spirit of brotherhood, solidarity, understanding, trust and mutual respect among its countries.

The Shura Council valued the praise by the GCC Supreme Council in the Final Communique of H.H. the Amir's announcement to hold elections for the Shura Council in October, and its congratulation to the State of Qatar on the election of H.E. Speaker of the Shura Council Ahmed bin Abdullah bin Zaid Al Mahmoud as Chairman of the Global Organization of Parliamentarians Against Corruption (GOPAC) for 2019-2021.

Ministry of Education and Higher Education

At the beginning of discussions on the education issues, H.E. Speaker of the Shura Council extended the sincerest thanks and appreciation to H.H. the Amir Sheikh Tamim bin Hamad Al-Thani for his great interest in everything that achieves prosperity and progress for the country and the citizens, especially education, as a fundamental pillar in human life and a fundamental pillar of Qatar National Vision 2030.

H.E. the Speaker of the Shura Council said that the Council, the government and the society aim to ensure good education and its beneficial outcomes, stressing that the recommendations of the Council aim in short at the formation of a good citizen who believes in his faith and is proud of his country, nation and language.

The recommendations of the Shura Council focused on curriculum development by emphasizing the Islamic, Arab and national identity of the Qatari society, paying attention to sports and cultural activities, addressing the phenomenon of Qataris reluctance to pursue the teaching profession, encouraging the private sector to invest in the education sector, addressing the phenomenon of private lessons, and developing appropriate mechanisms with clear standards that guarantee equality in the accreditation and certification of university degrees for Qatari and non-Qatari graduates of foreign universities.

The recommendations of the Council also included the necessity to take the needed practical measures to ensure the enrollment of more students with special needs in the educational process, increasing the salaries of mentors given the scientific value they represent and their important role in monitoring the performance of the teachers and developing their skills, reviewing the length of the school year and working go achieve proportionality between the duration of the two academic semesters, and standardizing vacations for students between public and private schools.

Presenting the report of the Ministry of Education and Higher Education regarding the recommendations of the Shura Council, H.E. Dr. Mohammad bin Abdul Wahed Al Hammadi explained the foundations upon which the educational curricula are based, and said that the general framework of the national educational curriculum is based on strengthening the national identity, instilling the spirit of belonging and consolidating the values and traditions of the Qatari society, in addition to a set of values derived from the Islamic religion, stressing that the national, Arab and Islamic identity is one of the most important principles that the educational curricula aimed to promote.

H.E. the Minister of Education and Higher Education highlighted the Ministry's keenness on discovering the distinctive talents and abilities of male and female students in the early stages of education, noting the implementation of the gifted care policy at the Special Needs Education and Gifted Care Department (the experimental stage) in 13 schools of various stages.

In terms of the ministry's efforts to eliminate tutoring, His Excellency noted that the ministry established classes that schools supervise in periods preceding tests, with the goal of providing a suitable and legal alternative to tutoring.

H.E. the Minister of Education and Higher Education stressed that the ministry has provided all the requirements needed to ensure students with disabilities are fully integrated into the educational process.

His Excellency announced that there is a comprehensive proposal for attracting the Qatari citizen to the teaching profession of all stages. That proposal involves financial and moral incentives during and after the conclusion of their service. H.E. the minister noted that they formed a committee to determine the career path for teachers, with a clear proposal made that has many factors such as years of experience, evaluation, and the obtaining of a license.

On reconsidering the length of the academic year, H.E. the Minister noted that the balance in the number of study days for the two academic semesters was taken into consideration in line with the international education systems, explaining that the leave for teachers and students has approached seventy days. In addition, the start of the academic year and annual vacations have been standardized between public schools and private schools, with coordination with Qatar University to standardize the start of the academic year and holidays between public schools and the university.

H.E. the minister highlighted that the ministry is constantly checking on private schools and their academic curriculums just like with public schools, adding that there is a code of conduct for teachers.

Assistant Undersecretary for Educational Affairs at the ministry Fawzia bint Abdulaziz Al Khater gave a presentation of the ministry's efforts in facing the implications of the Coronavirus pandemic. She said that the ministry's early preparation guaranteed the continuation of the educational process and the academic year successfully. She highlighted the launch of an e-learning program in 2012 and the implementation of distanced learning as two key factors that ensured the success of the academic year.

Following the remarks made by H.E. the Minister of Education and Higher Education, the Shura Council members discussed different topics related to education and developing the educational process in a way that reflects Qatar's national identity and keeps up with scientific and technological developments.

Following the conclusion of the discussions, H.E. the Speaker of the Shura Council thanked the government for its interaction with the council's recommendation and thanked H.E. the minister for the clarifications and explanations he made about the ministry's policy and future plans, praising the ministry's efforts in ensuring education was not interrupted by the Coronavirus pandemic.

For his part, H.E. the minister expressed his appreciation of the Shura Council's recommendations and proposal, stressing that they will be keenly examined with interest by the ministry.