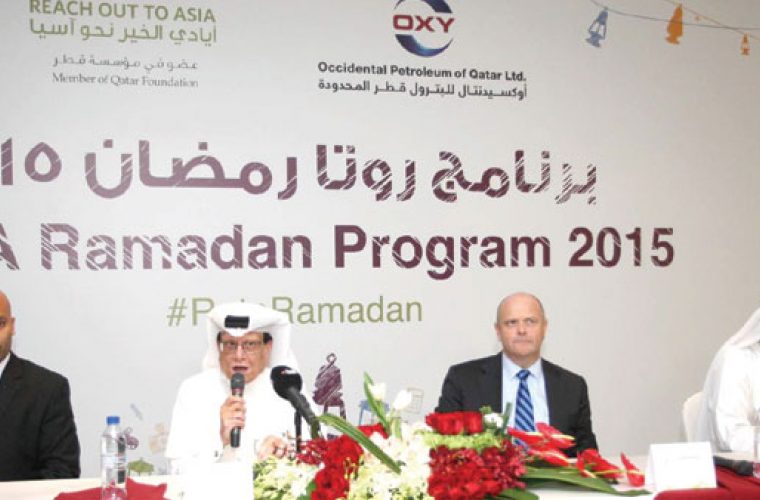 Reach Out To Asia (Rota), a member of Qatar Foundation, has unveiled a number of programmes for its upcoming Ramadan 2015 Project, ‘Giving Back’.
The announcement was made at a special press conference held at the Club House in QF’s Education City yesterday.
The press conference was attended by Mohamed al-Naama, acting executive director of Rota, Stephen Kelly, president and general manager of Oxy Qatar; Hassan al-Malki, deputy general manager of Oxy Qatar and George Tavola, manager, Volunteers Programme, Rota.
Lining up the activities for this Ramadan, Tavola said many of the activities will be held outside Doha. He explained: “For the ninth consecutive year, local residents in Qatar will participate in Rota’s community-based activities inside and outside Doha. As usual, we will start with the packing and distribution of groceries for about 200 families identified by the Social Development Centre. This will start from coming Saturday.”
Tavola said: “This year, in addition to the Iftars that we host in Doha, we will also hold three more Iftars for street cleaners of three municipalities. This will be for the Doha Municipality cleaners as well as cleaners of Al Khor and Al Shamal Municipality. For the Garangao events, volunteers will join and spend time with children at Hamad Paediatric Leukemia Unit, and Al Wakra Hospital. In addition, Rota will renovate a school building at Abu Hamour that provides academic guidance for about 100 out of school children.”
“This year’s programme is expected to directly benefit around 1,000 individuals and eight institutions across Qatar. About 200 volunteers have been recruited for the Ramadan 2015 Project through the recently-launched TAMM Volunteer Network,” added the official.
Al-Naama said: “For the ninth consecutive year, Rota’s dedicated and growing base of volunteers will give hope to those in need, and give back to the community that has given them so much. I would also like to extend our gratitude to our partner and sponsor, Oxy Qatar, which has contributed about QR700,000 for the Ramadan project.”
Kelly of Oxy Qatar said: “This year’s theme of ‘Giving Back’ reflects the true essence and meaning of Ramadan and provides opportunities for volunteers to give back and make a tangible, positive impact on their community. We appreciate Rota’s dedication and leadership and offer our best wishes for a successful Ramadan 2015 Project.”