Rehabilitation of kids with Down Syndrome urged 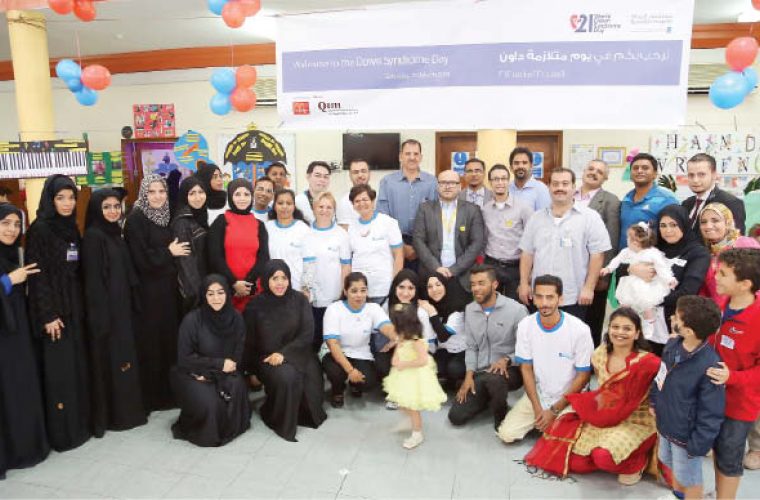 The Rumailah Hospital’s (RH) Child Development Centre (CDC) sees an average of 190 children with Down Syndrome, who are aged between 0-14 years.

According to Dr Haitham El Bashir, head of Children Rehabilitation and Development Section, children with Down Syndrome may have a number of other health problems including congenital heart disease or abnormalities within their body organs and system.

Many also have developmental delay reflected in their motor, language or cognitive development. “It is vital that as soon as the diagnosis is made for such children, they are referred for rehabilitation to avoid any delay in their development,” he suggested.

Over 80 children and families have attended the third annual World Down Syndrome Day held recently at Rumailah Hospital’s CDC.

World Down Syndrome Day seeks to raise awareness of Down Syndrome with the CDC event promoting interaction between children, families and healthcare providers in an informal setting through the combined efforts of the Occupational Therapy Department, Early Intervention Section, Special Education Section, Patient and Visitor Service Center and the Dental Department at RH.

Dr El Bashir said, “Like most of our programmes, this event was built around the idea of family-centred care, which not only includes offering medical services, but also incorporates the social and recreational aspect.

“We held the event in our premises because we wanted the parents to see that this place is not just a building where their children come to seek rehabilitation, but to understand that we look at the child as a whole and that we are vested in strengthening the talents and abilities of their child,” he added.

With the motto: ‘The Child with Special Talents’, the event saw a variety of enjoyable activities designed to attract different age groups with different abilities at a number of stations, including ‘Hands in Action’, where children utilised fine motor skills such as playing with play dough, making shapes and colouring; ‘Food as Fun’, where children prepared their snacks themselves; ‘Sensory Corner’, offering visual and auditory stimulation to children in the form of music and dance; ‘Assistive Technology’, showed parents the latest devices that can help enhance their child’s learning; and ‘Home-made Toys’, where parents learned new ideas on how to produce toys with the aid of raw materials easily found at home.

Intended to boost the relationship between staff and parents of children with Down Syndrome, the event also included a light-hearted skit that depicted a funny scenario at the hospital, performed by the Early Intervention team.

RH’s Pediatric Rehabilitation Assistant Director Fatima Mustafa stated that: “Parents often look at the healthcare professionals through a restricted lens. They are often not very comfortable expressing their ideas, sharing their worries and troubles, but this particular celebration has allowed us to break those barriers. Through such a celebration, parents are more willing to communicate with us, so we can in turn learn more about their child and together support his or her normal development.”

Down Syndrome, also known as trisomy 21 is a genetic condition, which occurs due to the presence of an extra chromosome. People with the condition therefore have 47 chromosomes in their cells instead of the usual 46. The current incidence of Down Syndrome globally is one in 1000 births on average.