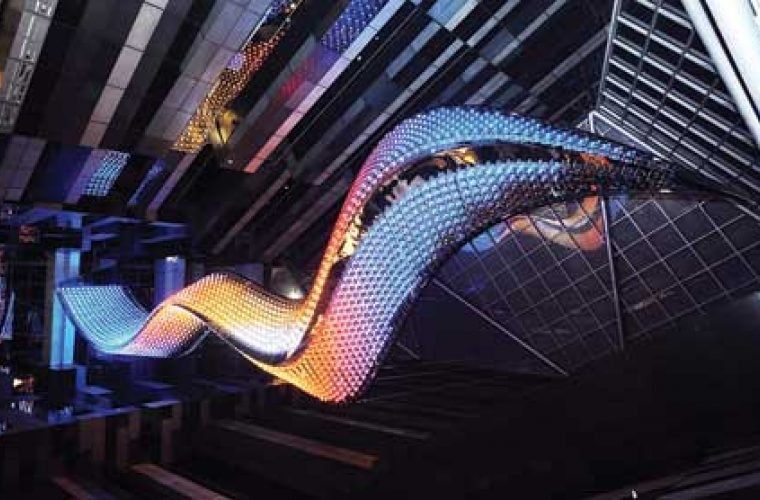 An office building on Qatar's waterfront is now home to the world's longest chandelier. The 38.5 metre long lighting fixture, which has been installed in the lobby of Hitmi Property Development on Qatar's Corniche, weighs more than 20 tons and consists of 2,300 individually hand-ground crystals. The chandelier, designed by Beau McClellan, uses 55,000 LEDs, netting it the slightly less glamorous world record for largest interactive LED light sculpture. But despite the dual awards, McClellan said the company was not in it for the glory. “We had no intention of designing this to impress or to set records, it just felt right. From the moment we produced the first 3D renders we felt the excitement, it was perfect, it blended with the architectural surroundings and yet it had a strong presence," he said. Steve Porter, project manager at Unusual Rigging and Engineering, who installed the chandelier, said that the design of the building's lobby made the project especially difficult. "With a glass ceiling and two glass walls, the atrium offered very few load bearing points," he said. “But this was unlike anything I’ve ever worked on before and I feel privileged to have been part of the project."