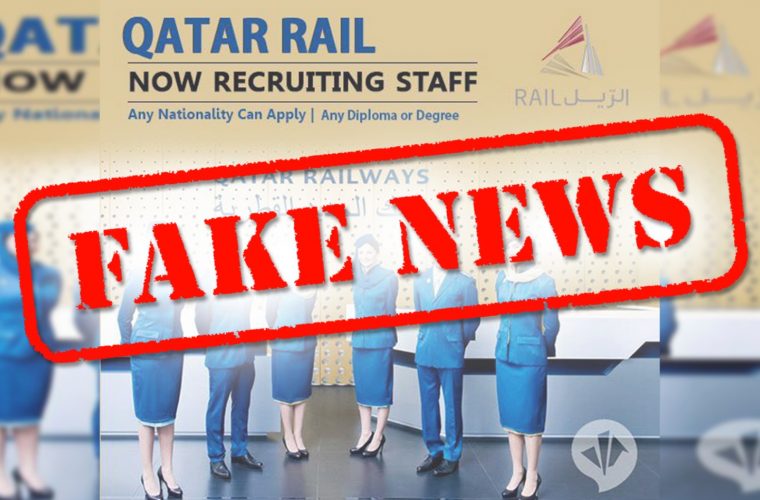 An advertisement for employment at Qatar Rail that's being circulated around the internet in Doha has turned out to be fake. According to several comments made by the actual company’s Twitter account, the image was not circulated by Qatar Rail.

The image showed a hospitality crew with the Qatar Rail Logo in the background, with the text “Qatar Rail, Now Recruiting Staff” printed on it. It was going around social media claiming that the company was recruiting staff, and any nationality could apply with any qualifications. However, Qatar Rail tweeted a few days ago that the company did not release the ad and legal action would be taken against those who distribute any images or ads without the company’s official approval.

The ad was being circulated around social media along with text listing various positions being offered, but it should be noted that ads like these can be misleading and people should be more careful trusting these social media posts. Fake websites and individuals can often create fake or misleading ads and distribute them over job search pages on Facebook or Twitter.

However, there are a few vacancies listed under “Careers” in the company’s official website, including calls for contract experts and senior specialists.

The company was established in 2011 to develop the railway system and create an efficient network of transport in the country.

Earlier this year, Doha News also reported that Qatar Rail had laid off nearly 50 people as part of their “business efficiency review”.

Have you come across the ad online? What are your thoughts? Comment below!