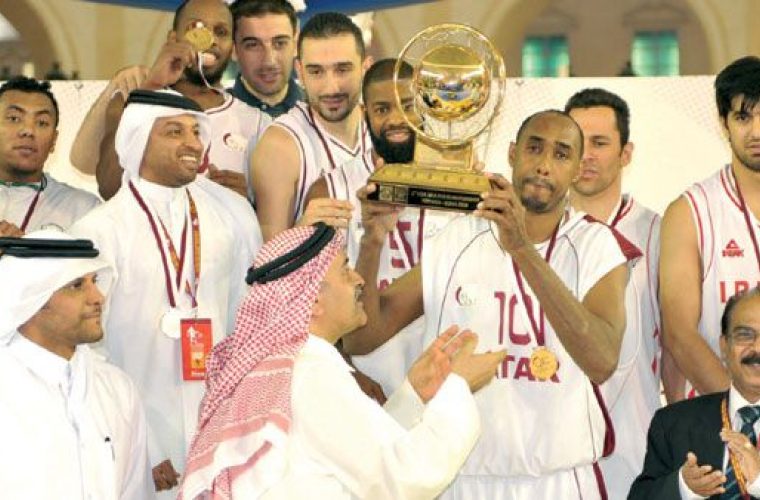 In the final match of the inaugural 3×3 FIBA Asia Men’s Championship at Villaggio Mall yesterday, hosts Qatar Maroon beat neighbours Saudi Arabia 19-17. With an unbeaten streak in the two-day event, Qatar Maroon regaled a large crowd at the make-shift basketball arena where the Indian team earlier won the women’s title by beating Mongolia. Exhibiting an attacking game, India edged past 21-14 at the same venue. Qatar Maroon played three games on Wednesday and then a similar number yesterday to bag the title. The event, staged by Qatar Basketball Federation (QBF), attracted 16 teams in the men’s event and 14 in the women’s competition. Sheikh Saoud bin Abdulrahman Al Thani, President of QBF gave away the prizes to the winning teams and the runners-up. Earlier, Qatar Maroon easily beat home team Qatar Grey 21-9 to reach the semi-finals of the two-day event. Also in the quarter-finals, Iran beat Chinese Taipei 21-15 while Jordan had to dig deep to beat Philippines 15-10. In the last quarter-finals, Saudi Arabia crushed India 16-15 to reach the semi-finals. In the semi-finals, Qatar Maroon edged past Iran 19-16 while Saudi Arabia had the better of Jordan. Saudi Arabia won 13-12. In the third-place play-off, Iran beat Jordan 19-8. In the women’s quarter-finals, India beat Qatar 21-5, Mongolia edged Sri Lanka 18-13, Hong Kong dispatched Lebanon 17-9 and Turkmenistan demolished Nepal 18-6. In the semi-finals, India hammered Hong Kong 21-8 while Mongolia just about managed to beat Turkmenistan 19-17. In the third-place play-off, Turkmenistan beat Hong Kong 10-8. Hagop Khajirian, Secretary General of FIBA Asia, who was also present during the championship, praised QBF for their hospitality. Prior to the start of the event, Khajirian said FIBA Asia would be presenting a detailed file of the event to International Olympic Committee (IOC) as the Asian basketball body pushes 3×3 for a place in the Games programme. Khajirian on Tuesday said the decision to bring the inaugural edition to Qatar was a no-brainer. “When the idea of bringing our first 3×3 championship to Doha was floated around, there was no opposition at all from any quarter,” Khajirian said. “The world knows Qatar’s love for sports. We saw the Asian Games here in 2006. The only Asian country from this region to host the Asian Games was Iran and that too in the 70s,” Khajirian explained. “We also know Qatar will host the 2022 FIFA World Cup. We are very confident that our file to IOC will be greatly appreciated because our events are being held in Doha,” he said. The 3×3 family will now move to Bangkok, Thailand, for the inaugural FIBA Asia 3×3 U-18 Championship for Girls and Boys. Source : Qatar Chronicle