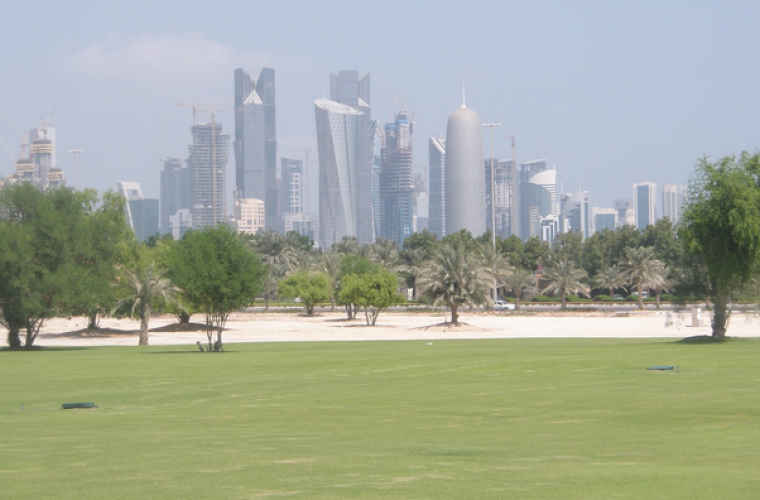 If all goes well, one of these dozen grasses will eventually take centre stage and become the most watched strips of green on the globe, at least for a 28-day period, during the 2022 World Cup.

The different turfs are being grown at a research and development centre to find the best playing surface for the football World Cup in six years' time.

"This is a unique facility, there's nothing like it in this region," said Yasser Abdulla Mulla, a sports turf manager with the Supreme Committee for Delivery and Legacy, the Qatari body responsible for organising the World Cup.

The R & D centre is located in Murakh, to the western margins of the capital, Doha. It was a place where dates were grown and locals brought their animals to drink at freshwater wells.

Now it is a high-tech testing centre, built in the shadow of the Khalifa International Stadium, which will host the World Athletics Championships in 2019 and World Cup games three years later.

All the grasses are flown in from abroad, usually the US.

They are transported as sprigs in 40 kilogramme boxes, planted, watered and grown in full shade, partial shade or left completely uncovered, leaving the turf to the mercy of Qatar's harsh desert climate.

The grasses are watered once a day and have been planted as a full pitch or in approximately metre-long squares, depending on what is being tested.

They are examined not only for how they survive the weather - even though the 2022 World Cup is being played in November and December, temperatures can still reach the mid-20s - but also the turf's "playability" and aesthetics.

The turfs are a selection of types such as Bermuda grass, commonly fast-growing and tough, Paspalum, found in sub-tropical regions, or tufted Ryegrass.

Sand and organic materials are used for the grass base.

The trials started last year and a final decision will be taken in 2017.

That choice rests with Qatar, says Mulla, but eventually it will have to be mowed into a pattern approved by football's governing body, FIFA, for the tournament.

It is gloriously green and verdant but if the centre all sounds like a glorious pastoral scene, then that is misleading.

The global sports turf market is big business and the names of the grasses being tested are kept secret for commercial reasons, except for one known cryptically as "Latitude 36".

A US market research company, Technavio, reported earlier this year that it expected the global sports turf market to be worth almost $3bn by 2019.

Mulla refuses to say how much has been spent so far on searching for the right grass.

There is also the migrant labour issue in Qatar.

In the recent Amnesty report, published in March, it mentioned workers employed by a company called Nakheel Landscapes.

The same firm employs staff among the 16 or so people working at the grass centre in Murakh.

In its response to Amnesty's report, the Supreme Committee said Nakheel "had undergone a comprehensive rectification process". (Source / Image)