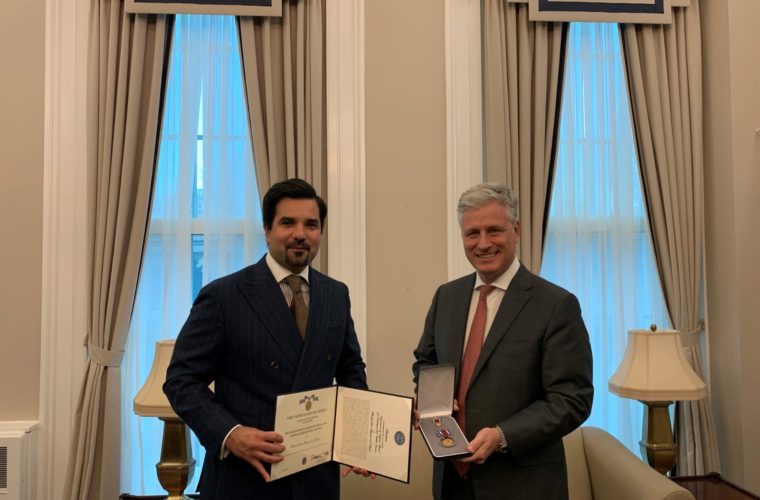 The United States, represented by the US Department of Defense, presented Deputy Prime Minister and Minister of Foreign Affairs H.E. Sheikh Mohammed bin Abdulrahman Al Thani with the Department of Defense Medal for Distinguished Public Service, the highest honourary award given by the United States to US officials and officials of the governments of friendly countries.

The medal is granted in recognition of distinguished and exceptional services and impressive achievements made by persons concerned who deserve appreciation and praise for their performance.

The US Department of Defense affirmed that awarding this high honor to the minister comes in recognition of his outstanding diplomatic efforts to strengthen relations between the State of Qatar and the United States and his commitment to cooperation with the United States across a range of fields.

The Department of Defense said that the Deputy Prime Minister's support for the US as a major ally of the State of Qatar has created new opportunities for partnership.

It also commended H.E.'s major role in supporting and advancing peace efforts in Afghanistan, particularly his diplomatic leadership, which for decades has played an essential role in making great progress towards peace in Afghanistan, including the signing of the agreement between the United States and the Taliban on Feb. 29, 2020, as well as the launch of the Afghan peace process on Sep. 12.

The US Department of Defense affirmed that the Deputy Prime Minister has exerted relentless efforts to promote stability and prosperity in the region and resolve the Gulf dispute.

This medal is given in recognition of the considerable personal sacrifice motivated by patriotism and a sense of public responsibility.

It is also an acknowledgement by the US Department of Defense of individuals' achievements and contributions that qualify them to receive this medal.

The US Department of Defense Medal for Distinguished Public Service was presented in the past to former US Presidents Barack Obama, George W Bush, Bill Clinton and other prominent figures.