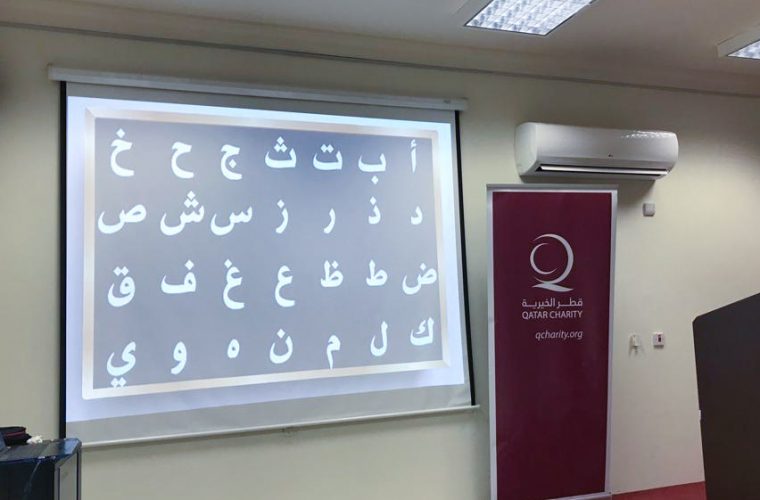 The Arabic course has started at the men’s branch of the Qatar Charity Centre For Community Development in Al Khor, in cooperation the Friends Cultural Centre (FCC), also a community development center of Qatar Charity for Asian communities in Qatar.

The course came as part of the ongoing implementation of “Tawasul”, a social and cultural programme for the non-Arabic speaking communities in Al Khor and Al Dhakira, which is implemented by the community center in Al Khor, in cooperation with FCC.

The Arabic course was launched at the request of the community members, including engineers, doctors, and other employees, who want to learn the Arabic language, know the culture, customs and traditions of the Qatari community, and communicate with native Arabic speakers.

Nearly 25 persons, both male and female, attend the course on every Sunday. Yasser Arafat holding, a Master's degree holder in Arabic from the College of Humanities, Qatar University, is a specialist in teaching Arabic to non-native speakers. He teaches the basics of Arabic, and correct pronunciation of Arabic letters to the participants.

Those, who will pass the exam of the 6-month course, will receive a certificate at the end.

The participants praised Qatar Charity’s Arabic course, considering it a valuable opportunity to raise their level in Arabic, because they reside in a country where Arabic is the mother tongue.

It is worth mentioning that Qatar Charity, through this program, aims to offer cultural, social, and educational services to the non-Arabic speaking communities in Al Khor and Al Dhakira, enhance solidarity and harmony among them, and provide them an opportunity to learn about the culture, customs and traditions of the Qatari society.

In February, FCC celebrated the graduation of 28 students from the Arabic for Non-Native Speakers (ANNS) Programme at a ceremony held at FCC’s headquarters.

The list of those who graduated from the programme included both male and students belonging to different Asian communities residing in Qatar.

The students studied the Arabic language for four months at the Beginning and Intermediate levels.