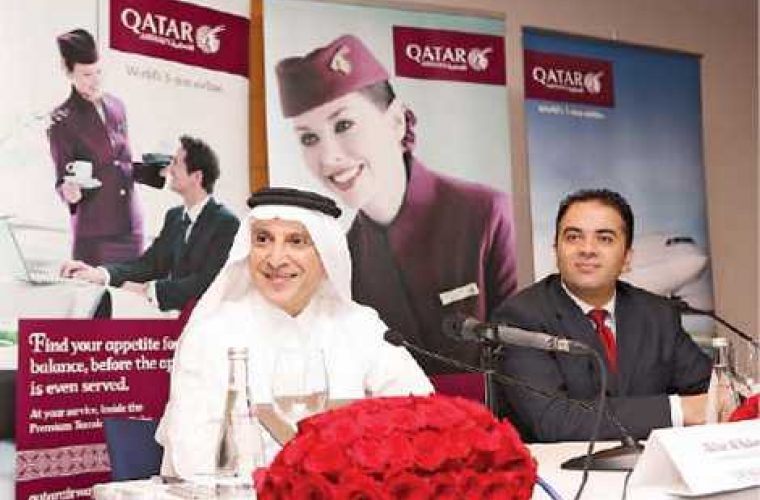 Qatar Airways is in talks with Airbus to buy up to 15 of the European planemaker’s A330 passenger jets, a deal potentially worth $3.6bn at list prices, citing production delays to Boeing’s 787 Dreamliner aircraft. “We are talking to Airbus about A330s to fill in the gap that the Dreamliner delays have caused Qatar Airways... Anywhere between 10 and 15 (aircraft),” Chief Executive Akbar Al Baker said yesterday. “It’s a new order,” he said, adding the deal would be finalised by June’s Paris Air Show. Qatar is among airlines expecting to receive compensation for delays to the delivery schedule for the 787 caused by a series of production snags, and for the grounding in January of Dreamliners already delivered due to battery faults. Al Baker said at a press conference in Dubai yesterday that the airline had to forego $200m in revenue up until April 2013 because of the grounding. It expects to have all five of its Dreamliners which were delivered before the grounding back in service with modified batteries before the end of May. “We have already spoken to them. We are done,” he said on the topic of compensation, declining to provide further details. Airbus is benefiting from a revival in sales of the A330 since the 787 encountered production delays even though Boeing plans to bring out a new 320-seat stretched 787 that it believes will eclipse the A330’s appeal. “The 787 should be an A330 killer but it is late and the penalty payments (from Boeing to airlines) are coming straight to Airbus in the form of new A330 sales,” said an aerospace analyst at the Teal Group consultancy in a recent interview. Boeing is looking for a prominent customer like Qatar to launch the stretched Dreamliner, code-named 787-10X, which it believes will appeal to airlines that do not need the range of other new jets but want the lower fuel costs of the 787’s lightweight design. Analysts say Airbus has breathed new life into the A330 by playing up its availability and reliability, while discounting the price to ensure total ownership costs come in below the 787. Qatar’s decision to look at more A330s does not mean it will ignore the 787-10X, a design concept which Baker has praised for promising low seat-mile costs, but highlights the tough battle being fought between old and new technology at the smaller end of the widebody jet market. At the larger ‘mini-jumbo’ end of that market, rival Gulf airline Emirates said yesterday it would replace a major part of its 777 fleet with Boeing’s new 777X offering. “It’ll be a large order,” the airline’s president Tim Clark told reporters, without specifying the number of planes he plans to order. Fast-growing Gulf carriers are expected to be the first and biggest customers for Boeing’s latest offering, which has been presented to customers around the world. Emirates is the largest 777 customer with a fleet of 175 jets. “I’m not saying we’ll be buying 175 of them (777X) but we need to replace (the 777s) from 2017,” said Clark. He added that Emirates would be looking at both the 8X and the 9X version of the 777X. The 350-seat 777-8X is expected to be the world’s longest-range jetliner. Gulf airlines are expanding their reach globally, ordering more planes and forging alliances with other carriers. Abu Dhabi’s Etihad Airways took a 24 percent stake in India’s Jet Airways in April for $379m, while Al Baker said yesterday Qatar Airways would like to cooperate with India’s biggest domestic carrier Indigo. “We hope that on the level of the management we will begin talking to them,” Baker said. “I don’t want to talk about stakes. I don’t have so much money to buy stakes in airlines.” Source : Qatar Chronicle