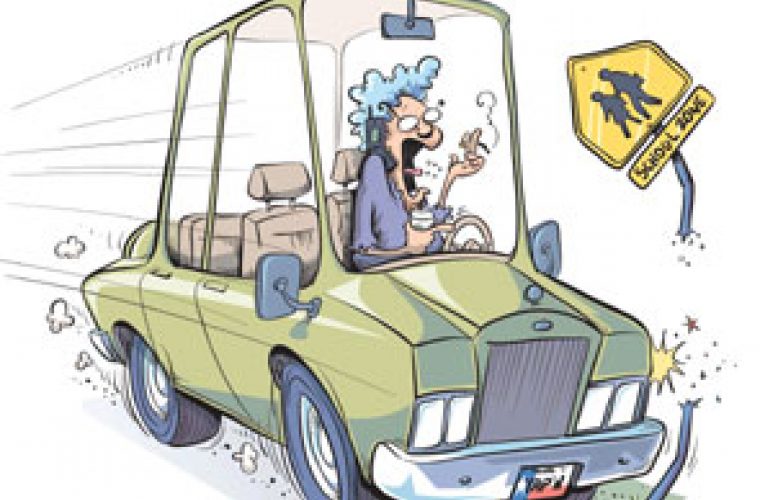 The Traffic Department has urged the public to report reckless drivers to them after Gulf Times learned that a motorist is still on road despite amassing QR38,400 in fines and collecting 128 penalty points since February 2008. It was also revealed that the road permit (Istemara) of the vehicle being driven had not been renewed since November 2007 and was therefore uninsured. The latest violation against this vehicle was recorded on July 22. A Western expatriate had the scare of his life early this week when he was “nearly killed” by this motorist when he was on his way to work. “He suddenly wanted to take the slip road I was already on and if I hadn’t taken evasive action I would have been joining my family back home in a box,” the victim told Gulf Times. “I took the vehicle’s registration number down and at the earliest opportunity went onto the Ministry of the Interior’s website, keyed in the plate number to try and find out an ID of the offending driver and was shocked to find that the vehicle had over QR38,000 in fines and 128 points logged against it,” he said. When the matter was brought to the notice of a Traffic Department official, he said the “motorist” had been lucky to evade arrest so far. “The police must be looking for him,” he said. However, the official said there was no “automatic mechanism” with the Traffic Department to trace down owners of vehicles which had amassed huge amounts in fines and collected similarly high negative points. “The Traffic Department is not empowered by law to go after such violators. They may be caught during an inspection drive on the roads or made accountable while applying for renewal of the road permit.” As a remedial step, he advised victims of “aggressive and reckless driving” to bring the matter to the notice of the Traffic Department. “If the public acts proactively, such drivers can be reined in,” he said. Adding to the threat from such drivers is the fact that such vehicles are also not insured because their road permits had not been renewed. “No insurance company in Qatar (by law) is allowed to insure a vehicle, which does not have a valid registration. Also, for insurance renewal, the police (clearance of both technical and legal inspection) certificate is compulsory,” an industry source said. The insurance company official said it was illegal to drive a vehicle without a insurance over. “At least a vehicle must have third party cover, as per local law,” he added. The motorist who had a near-miss wondered what would happen to the victims if vehicles with no insurance cover met with serious accidents. “It is a grave scenario. It is highly advisable to have a system in place to hunt down drivers, who have scant respect for the law of the land,” another motorist who had a similar experience said. Safety regulations in Qatar have been improving, thanks to a more stringent traffic law adopted in October 2007 and a country-wide traffic safety campaign. http://www.gulf-times.com/site/topics/article.asp?cu_no=2&item_no=376743&version=1&template_id=57&parent_id=56