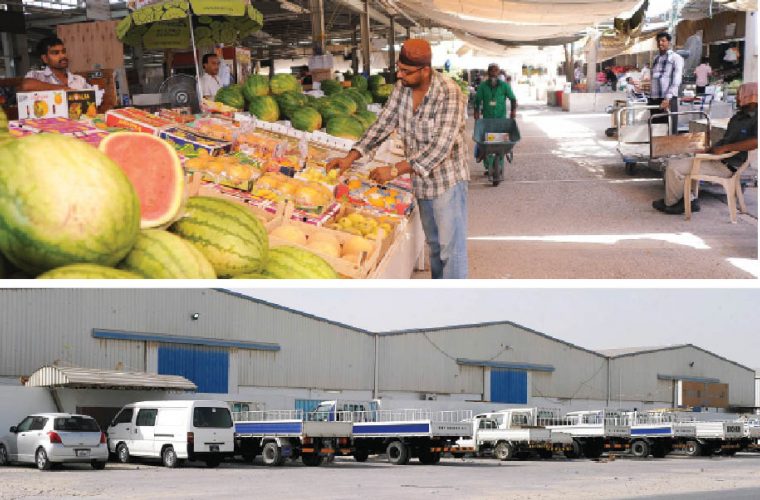 Inadequate logistical facilities, such as price-competitive warehouses, and high freight rates are among the main reasons for relatively high food prices in Qatar compared to neighbouring countries.

Despite market regulatory mechanisms being in place, prices of many food items have soared over the past few years due to ever-growing demand, which experts believe could have easily been kept under control with adequate support services and better planning.

Consumers here who frequent markets in Saudi Arabia and the United Arab Emirates often remark on the lower food prices there. For instance, a two-litre bottle of fresh milk of a popular brand from Saudi Arabia costs about 30-40 percent less in these neighbouring countries.

Qatar’s population has witnessed rapid growth over the past several years, but resources and facilities to support the population have not kept pace with it.

Within one month (between August and September 2013), Qatar’s population increased by more than 170,000 (largely due to the influx of foreign workers), putting tremendous pressure on resources.

Roads, public transportation, commercial centres, housing units, medical facilities, schools and others social services have seen some growth with the rise in the population, but there has been limited or negligible growth in wholesale markets and warehouses. According to industry insiders, these facilities are running under tremendous pressure.

Experts from the industry suggest that there is an urgent need for massive investment in the sector to build more contemporary or air-conditioned wholesale markets and a cluster of strategically located warehouses to provide adequate food storage facilities at affordable prices to cater to the ever-growing population.

“There are not enough warehouses to support the food requirements of the current level of population as per the level of food security that we are aspiring to achieve,” said Ali Hasan Al Khalaf, Chairman of Qatar Consumer Complexes.

“The country needs to develop big warehouses so that importers can source food in big volumes from the countries of origin instead of buying from second or third parties.”

Al Khalaf added: “With a state-of-the-art new airport and an upcoming seaport, we cannot continue leaving the country’s food security at the mercy of others due to a lack of enough warehouses and better logistics.”

Speaking on the need to develop more wholesale markets, he said that the Central Market was set up when Qatar’s population was a little over 200,000. That figure has now grown to over two million.

“We are still relying on the same facility for catering to a population which has grown ten times larger,” he remarked.

Most businessmen this newspaper spoke to noted that due to the country’s economic boom the population had increased sharply in a short period, causing unprecedented growth in demand for goods and services across all sectors. The market has lagged behind in meeting the demand for some items, especially fresh food.

According to reports, local production of some food items, such as poultry products, is able to meet only 10 to 20 percent of the demand, with the rest being met by imports.

Market analysts say some greedy retailers take advantage of demand and supply imbalances, which can be easily addressed with better planning and by having sufficient buffer stocks of food.

Some have urged the authorities to conduct a comprehensive study to assess the short-term and long-term demand for food and reorganise the wholesale and retail markets accordingly.

“Due to the demolition drive to pave the way for several development projects, a lot of retail outlets and supermarkets have disappeared. The government is striving to overcome these problem by establishing retail companies and complexes in different parts of the country under Al Furjan and other projects, but there is a need to do more by setting up additional entry points for speedier movement of goods from importing countries,” said Al Khalaf, who has significant investments in the retail sector.

He also highlighted the need to improve management of ports, including customs clearance and better handling of goods. “Shipping rates in Qatar are among the highest in the region, and can be reduced to check rising prices,” he said.

The Qatar National Food Security Plan (QNFSP) outlines a 10-year road map for improving food and water security and developing the domestic market through reforms in policies and expansion of critical infrastructure.

Under QNFSP, local and international experts are identifying ways to build a more coordinated and resilient system to ensure safe, healthy and affordable food supply for people in Qatar.

“Local production of food such as poultry products and animal husbandry should be encouraged through easy access to finance and other incentives to private investors.

“In addition to enough warehouses, we also need to have more facilities to meet the growing demand for ‘khubz’ (a popular Arabic bread) and other bakery products.”

Qatar sources over 90 percent of its food from outside, but under QNFSP it is moving to high-efficiency production and better crop selection for farms in the country to be able to produce approximately 40 percent of the nation’s food (by volume) using the same amount of land and one-third less water than is used today. If this ambitious target is achieved, it will reduce the country’s heavy dependence on food imports.

Referring to the government’s plans for earmarking three areas for warehouses (each with 500 stores), Al Khalaf noted that these facilities must be managed and run by government agencies and made available to food importing companies at reasonable rates to avoid their commercialisation.

“In the 1970s, the government established the country’s sole wholesale market and some warehouses to provide these facilities to investors at reasonable rentals. Those initiatives should be emulated now to ensure uninterrupted supplies and stable prices,” he added.

Qatari importers source a wide range of food items from neighbouring countries instead of importing them directly from the countries of origin as that would require them to place big orders and also need adequate warehousing facilities to store the food for long periods.

Experts say that buying food from second or third parties not only increases the price but also affects quality. Moving from one place to another, a food product loses about 30 to 40 percent of its nutritional value by the time it reaches the consumer’s table.

“Keeping in view the harsh climatic conditions, we should develop air-conditioned or fully covered wholesale markets at least for perishable food items such as fruits and vegetables,” Al Khalaf said.

He noted that Qatar, with its strategic location, long coastline and world-class airport and port facilities, could be developed as one of the re-exporting hubs in the region.

“For that we need to create a business-friendly and competitive environment by encouraging public-private partnerships. In this regard Qatar Chamber can play a big role,” he said.

“We at Qatar Chamber do not have any information about a food shortage in the country. Every country in the world, including the most developed economies that are not self-reliant in terms of local food production, rely on imports from different parts of the world. So we are no different from the rest. We are endowed with some other resources, and the government is well-prepared and doing its best to ensure food security at stable prices, said Ali Abdul Latif Al Misnad, Board Member at the Chamber.

“Qatar has allocated adequate resources in all sectors of the economy uniformly to achieve sustainable development of the country, including in the field of food security and water security.”