Plastic pollution in Qatar: ways to overcome the deadly nightmare 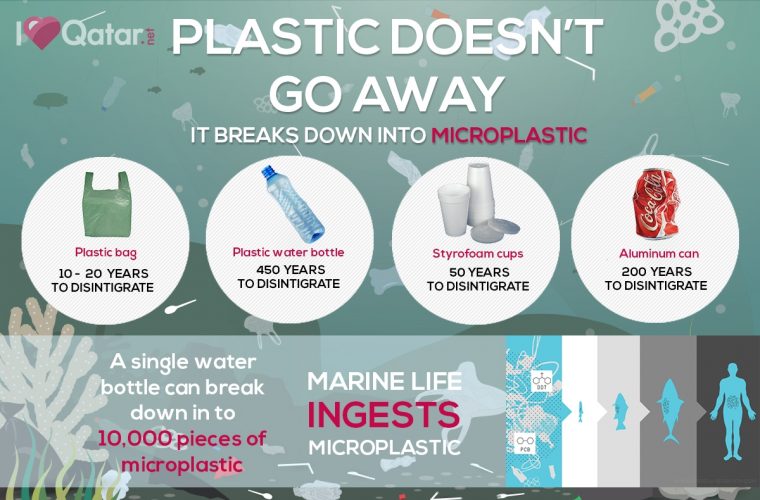 Plastic materials have effectively permeated every aspect of our modern life, from the straw that we use to drink the juice to the bags we carry our shopping in. But the accumulation of plastic in the landfills and oceans represents a growing environmental risk. More recently, we have come to understand that plastic poses a serious, even deadly threat to public health, too.

The population in Qatar has increased in the last few years which has resulted in generating more waste. The country produces more than 2.5 million tons of municipal solid waste each year. Qatar has one of the highest per capita waste generation rates worldwide of 1.8 kg per day. The solid waste stream is mainly comprised of organic materials (around 60 percent) while the rest of the waste stream is made up of recyclables like glass, paper, metals, and plastics.

As plastics are synonymous with convenience in a lot of ways, they are widely used in Qatar, specially white plastic bags are more prevalent in all walks of life, from carrying our groceries to holding our takeout.

But have you ever wondered how long does plastic stay around in landfills? Why should we minimise our plastic waste? And how can you reduce your plastic waste? So let’s have a look at the shocking sides of overusing plastics and how we can address this problem.

Besides its widespread versatility, the waste plastic creates pollution on the environment at an alarming rate. And here are some shocking plastic facts.

Is microplastic available in waters of Qatar?

(A sample of microplastics found in waters of Qatar)

As a lot of plastics end up in the ocean, over the time, they break up into very small particles and result in the generation of microplastics –typically less than 5mm in diameter. These microplastics are entering the food chain and, ultimately, our bodies which is a serious threat to our life.

So now the question is if Qatar’s water contains micro-plastics! The answer is – yes! The first evidence of the prevalence of microplastics in Gulf seawater, specifically in the marine waters off Qatar, has been documented through a research study conducted by senior researchers from Qatar University Environmental Science Center (QU-ESC).

“Polypropylene microplastics were the most common type of plastic polymer found with most particles being either granular or fibrous in shape, with sizes from 125m to 15.98mm,” said team leader and ESC’s former director and professor Dr. Jeff Obbard.

Lessons from the countries fighting with plastic addiction

A ban on plastic bags

Some countries have introduced a ban on plastic bags due to the high volume of plastic litter that negatively affects the environment. For example, in August 2017, the usage of plastic bags was completely banned in Kenya. If anyone is found selling, producing or even carrying any kind of plastic bag they could face up to 4 years imprisonment or a hefty fine of up $40,000.

(Image: Reverse Vending Machine for people to put and return empty bottle into machinery for exchange money at a supermarket in Mannheim, Germany)

Another way that countries have tried to tackle plastic pollution is by offering payments for returned plastic items. Twenty-three countries, mainly in Europe and the Pacific Islands, have established plastic rebate schemes that allow people to earn a small amount of money by returning items like plastic bottles. This plan also helps countries meet recycling targets for plastic.

Germany has the best recycling rate in the world. Austria comes in second, followed by South Korea and Wales. All four countries manage to recycle between 52 percent and 56 percent of their municipal waste which includes plastic waste as well.

What can we do to reduce and prevent it?

Waste plastic creates havoc on the environment at an alarming rate. The situation is already dire, but there are remedies available to solve the problem and everyone needs to be a soldier in the fight because. Let’s check what we can do from our side to contribute to fighting the larger plastic pollution crisis.

Reusable shopping bags are a superb alternative to plastic bags. One high-quality reusable bag can supplant thousands of plastic bags. Switching to reusable bags is a simple change yet it can reduce plastic pollution dramatically.

You may not be aware that of one of the major sources of seawater pollution is our clothes. Polyester, nylon, acrylic, and other synthetic fibers — all of which are forms of plastic. A single load of laundry could release hundreds of thousands of fibers from our clothes into the water supply.

Say no to disposable products

We're using an increasing number of single time used disposable products such as cotton swabs, straws, and cups. Replaced them with more environmentally sustainable materials that can break down. And bring a reusable mug when ordering your favorite drink at the coffee house.

Join in the beach clean-ups campaign

A team of volunteers is currently making waves in Qatar through their movement on beach clean-ups as well as their efforts on rooting out plastic pollution. You can contribute to a sustainable environment by joining them. To know more about their activities, click HERE.

Ministry of Municipality and Environment has taken a number of initiatives to curb disposal of plastic waste at random places which takes years to decompose causing environmental pollution.

Under the initiative, the Ministry has started providing separate bins at places to ease the recycling process which is also helping cut the cost of the waste sorting. The move aims at encouraging citizens and expatriates to use the alternatives of plastic bags and creating awareness among them to throw plastic waste like wrappers and water bottles at designated places and bins.

War on plastic pollution seems obvious, but we’re not doing a great job of it. It’s clear that there needs to be a dramatic increase in this recyclability rate as well as providing free plastic bags from the store should be banned. Recyclable materials, for example, bioplastics can be used for packaging, and plastic deposit schemes is also another way for further development.

Finally, if we all do our part to eliminate the need for single-use plastics in our life, whether it’s little by little or all at once, we can make an amazing difference for our beautiful planet.

What are you doing to reduce plastic use? Do let us know in the comments below and don't forget to like and share this article!